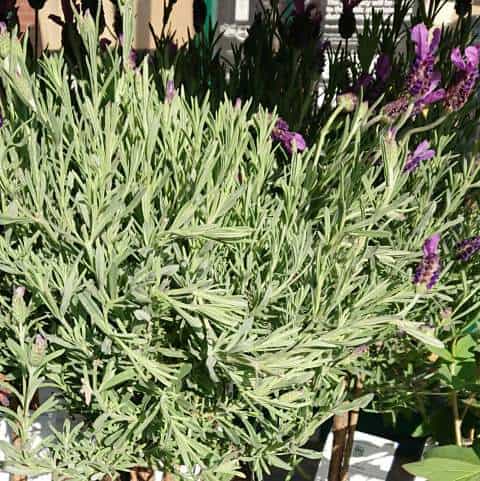 Lavenders should grow straight from a relatively even in a mound shape as this will resist Winter weather such as snow and ice which can damage the lavender.

Other potential reasons for lavender growing sideways include, over watering (which cause the plant to droop over) or lavender in pots that are located in a corner, so only one side of the plant gets most of the sun.

I should stress that it is far more likely that nutrient rich soil conditions or fertilizers are the cause for lavender growing sideways then over watering or any other cause.

Lavenders are native to countries in Southern Europe in the Mediterranean region where they have adapted to sandy soils that are relatively low in nutrients, in full sun with little rainfall.

It is in these conditions that lavender grow their best with scented foliage, and abundant flower displays.

Sand does not retain or contribute much nutrients in the soil (which lavenders prefer) so when they are planted into rich soils or compost or with soil amendments such as manure, then lavenders may start to droop in appearance yet carry on growing sideways.

Excess Nitrogen in the soil is responsible for excessive stem and foliage growth which results in lavenders stems that are more soft and sappy then usual which make them more liable to fall over rather then grow straight as normal.

If there is too much nitrogen the lavender can grow sideways and droop down, yet still grow at a quick rate as the nitrogen stimulates growth of stems and foliage but usually at the expense of flowers and aroma.

If the nitrogen content of the soil is particularly high (or because of additional fertilizer) then the lavenders leaves may turn yellow.

To ensure that the lavender grows into a proper shape, rather then sideways it is important to replicate the soil conditions of the lavenders native environment by creating a low to medium nutrient soil mix.

Fortunately this is very easy to do and only requires sand or grit with some potting soil or compost.

If possible try to use horticultural sand as the particle size is bigger then regular sand which allows for improved drainage and an aerated soil for efficient root respiration.

You can either lift the lavender out of the ground gently with a fork (to avoid damaging the roots) and amend the soil with sand or transfer the lavender to a pot which is often easier.

Add roughly 1 third of the volume of pot or planting area with sand and 2 thirds with compost.

This mix recreates the same proportions of sandy/stony soils in the Mediterranean and balances out the lavender of nutrients so that it is suitable for growing lavenders.

(Read my article to learn about the optimal soil mix for lavenders).

With the appropriate growing conditions the lavender should begin to recover and the foliage should grow upwards rather then sideways.

However if there has been extensive sideways growth then pruning the excess sideways stems of the lavender (preferably in the Fall or early Spring to avoid compromising flowering) will improve the lavenders shape and allow it to grow properly.

Watch this YouTube video for how to prune lavender:

Lavenders also do not require any fertilizer for the same reasons that they do not like nutrient rich soil.

Lavenders prefer a low to medium fertility soil and additional fertilizer is contrary to these preferred conditions.

Lavenders are plants that thrive on neglect in relatively harsh conditions.

The use of fertilizer can cause a more pronounced adverse reaction for lavenders (in terms of sideways growth and foliage turning yellow) then fertile soils due to the contrast of a sudden influx of nutrients.

If the lavender appears to be growing sideways or drooping quickly with leggy foliage growth and the leaves are turning yellow then it is a good idea to transfer the lavender into a pot or container with the appropriate sandy soil mix to help it recover.

The lavender should survive but it will take some patience as the lavender may take some time to look normal again and it will require a good prune in the Fall to achieve the right shape.

However, the following growing season the lavender leaves should start to turn green and display more flowers.

Note that the leggy of growth of lavenders are more susceptible to fungal disease therefore ensure the lavender has good airflow by spacing the lavender suitable distance apart and water the lavender infrequently (once every two weeks if there has been no rainfall).

lavender recovers, should start to grow properly rather then sideways, however this may take time.

A potential cause of lavender growing sideways is that the soil is too damp. This could be due to:

Lavenders are native to hot climates, with dry sandy soils and little rainfall, therefore they do not like damp soil.

Lavenders in consistently moist soil will show signs of stress such as drooping or perhaps a wilted appearance which may look as though the plant is growing sideways.

Damp soil increases the likely hood of fungal disease. If the foliage starts to turn brown, black or gray then the lavender is suffering from a fungal disease.

If you suspect the lavender is growing sideways because of damp soil:

With dryer soil conditions the lavender should improve over several weeks and begin to grow normally with healthier stems, and more resilient to disease.

Lavender in a Corner with Less Light

Lavender prefer to be in a relatively open area with full sun and an occasional breeze, to prevent fungal disease.

If lavenders are in corners of the garden (particularly pots on patios) then the growth on one side of the plant that is relatively shaded will not be as prolific and the side that faces the sun may grow somewhat sideways.