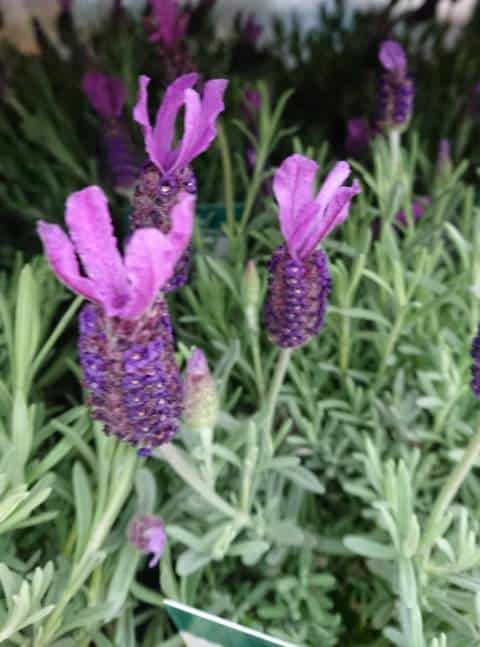 The two most common causes for lavenders turning black are frost damage or fungal pathogens such as Fusarium wilt or Verticillium. Lavenders can turn black at the base, from the stems and foliage or as black spots on the leaves as is characteristic with the disease Septoria leaf spot.

There are several fungal disease pathogens that turn lavenders black and it is often difficult to isolate which specific fungus is the cause.

However, the methods for prevention and treatment are all the same so keep reading for the reasons why, and how to save lavenders that are turning black…

One of the most common reasons for lavender turning black is due to frost damage.

This is more common with French and Spanish lavender varieties as they have more tender leaves then the English and hybrid lavenders which are more cold hardy and can tolerate ice, frost and snow, although they can still be susceptible to damage from a late frost.

Late frosts in Spring are the biggest culprit for inflicted damage as the new emerging foliage is more delicate and therefore at greater risk from sudden freezing temperatures.

You can tell whether your lavender is turning black due to frost damage rather then fungal disease if the new Spring foliage is affected and turning brown or black whereas the more established foliage is relatively unaffected.

The solution… is to snip away any black foliage that has been killed by the frost and ice. This will stimulate new growth and the lavender should recover without any problems.

If the lavender is severely frost damaged then it is likely that your lavender is French, Spanish or Portuguese species of lavender and not suitable to be left outdoors all year round in your climate.

Instead consider planting English lavender Varieties such as ‘Munstead‘ and ‘Hidcote‘ which are capable of tolerating freezing temperatures and living for up to 15 years.

Lavender Turning Black due to Fungus

If the lavender is turning black from the base with stems and foliage both affected or there are black spots on the foliage then the lavender is suffering from a fungal disease rather then frost damage.

There are several pathogens that cause lavenders to turn black or brown and it is often in conjunction with a drooping appearance of the lavender.

The different fungal diseases that cause lavenders to turn black, all thrive in soils that are consistently damp and in climates of higher humidity.

It is often difficult to specifically identify which fungal pathogen is responsible for the disease, but fortunately the methods of prevention and the way to solve the problem are the same.

How to prevent fungal disease…

In their native Mediterranean habitat, lavenders thrive in soils that are sandy, well draining and low to medium in nutrients with an alkaline pH, in full sun and with little rainfall.

To ensure that the lavenders in your garden remain disease free it is important to replicate some of the soil conditions of the Southern Europe for them to thrive.

Planting lavenders in these conditions is the best way to prevent any fungal disease.

(For more information on caring for lavender read my articles on lavender , Munstead, Hidcote and Grosso).

Lavender will not grow well in heavy soils such as clay or any soil that is naturally boggy and drains too slowly.

If your garden soil is slow draining then I recommend that you plant or transplant your lavenders into pots which have far more favourable drainage then garden soil.

You can also amend the soil mix for pots much easier then garden soil to include materials such as horticultural grit and sand which improves drainage, balances the soils fertility and therefore emulates the preferred soil conditions of lavenders.

Clear away any excess organic material that may accumulate around the lavender such as dead leaves in the Fall as this will hold onto moisture around the base of the plant and increase the likely hood of a fungal disease.

Mulching with white stone can be a good way to keep the weeds down and to reflect light back onto the lavenders foliage and reduces surrounding moisture.

Do not mulch with any materials that retain water such as, compost, leaf mould or well rotted manure.

How to Solve Lavender Turning Black…

If the lavender is turning black or brown then you should remove the lavender from the ground. The fungal infections that turn lavender black exist in the soil and they thrive in damp conditions.

Do not replant any other lavenders or preferably any other plants in this patch of your garden as they too could be infected with the fungus.

Whether or not your lavender recovers from turning black due to fungal disease will depend in the extent of the infection.

Mildly infected plants do tend to respond well to treatment but severely infect plants are often difficult to revive and may die.

If the lavender cannot be saved, burn the plant to kill the fungus or throw it away so it does not spread around your garden.

Prevention is better then cure with lavenders so always ensure that lavender are planted in dry, well draining soil, with sand or grit and do not over water them.

(Read my article on the best soil mix for lavenders).

More problems occur because of over watering lavenders then from under watering due to their natural resistance to drought and their preference for a dry environment.

All lavenders are potentially affected by disease due to damp soils or high humidity but Hybrid lavenders tend to be less vulnerable to disease.

(Lavandula x intermedia) ‘Grosso’ is a lavender that combines the cold hardy characteristics of English lavender with the longer flowering season of Portuguese lavender and exudes a sweet aroma.

Hybrid lavender such as ‘Grosso’ are a great choice due to their hardiness along with English lavenders ‘Hidcote’ and Munstead’.

(For all the best care practices, read my article, how to grow lavenders in pots).