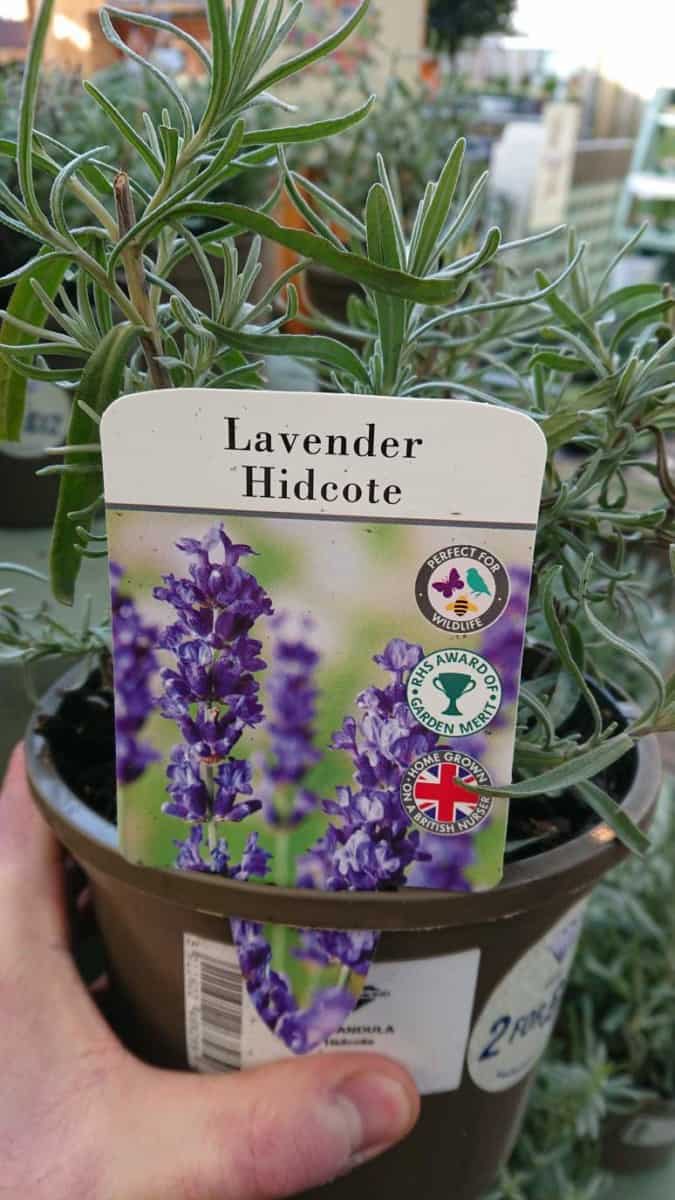 Lavender Hidcote (Lavandula angustifolia) is an English lavender that is valued for its hardiness, strong fragrance and ability to withstand cold Winters. Hidcote is popular with commercial growers and gardeners alike due to its low maintenance and is commonly used as a decorative hedge.

Here’s a quick look at the growing requirements and care instructions for lavender hidcote.

Keep reading to learn where to plant Hidcote, watering, pruning, soil mix and all the best practices to ensure a strong bloom and a healthy lavender…

Hidcote lavenders are a hardy variety of English lavender that can tolerate cold Winters with frost and snow and they are also suited to growing in hot climates such as California or Southern Europe.

Whilst Hidcote can grow in cool temperate climates with relatively high rainfall, it does require full sun, or at least 6 hours of sun per day.

The more sun the stronger the scent from the foliage and the more flowers on display.

Lavenders originate in the coastal regions of Europe and appreciate somewhat breezy conditions with good airflow between the foliage which helps to limit the risk of fungal disease.

Hidcote does not tolerate humid climates and will likely develop fungal disease or not live long in these conditions.

English lavenders are one of the few species of lavender that will live in climates with cold Winters (French lavenders are not cold hardy). Hidcote can tolerate freezing temperatures in the Winter and live for up to 15 years.

(Read more about the differences between English and French Lavender).

However in climates with cold Winters or high rainfall, good soil drainage and soil that does not retain moisture is a priority as lavender does not like moist soil around the roots.

Keep reading for how to amend soil so that it is suitable for lavenders.

Lavender Hidcote flowers in the Spring or early Summer usually in May or June and the flowers last for around 4 weeks.

There are several things you can do to ensure a good display of flowers such as annual pruning in the Early Spring and dead heading the flowers when necessary, as well as ensure the lavender is planted in the optimal soil, with enough light and infrequent watering.

Hidcote, as with all English lavenders do not flower for as long as French lavenders, however the aroma from the flowers and foliage is much stronger and sweeter. It is for this reason that varieties such as Hidcote are prized by commercial lavender growers for their oil and fragrance.

The flowers are one of the most popular with the pollinators such as bees and are a real benefit to your gardens ecosystem.

The Best time for planting is in the Early Spring or Early Fall although successfully planting in Summer is possible.

In the early fall the soil is warm enough and holds some moisture for the lavenders roots to establish quickly but the daily temperatures are not as high as Summer which reduces the risk of the lavender drying out.

Lavenders do prefer dry conditions but they can be susceptible to drought straight after planting whilst their roots are not fully established. (To learn how to water lavender after planting read my article how often do lavender need watering?)

Hidcote will also have finished flowering in the Fall so the bloom will not be affected and there is enough time for the plant to adapt to its new soil conditions before the lavender blooms in the Spring.

Hidcote can also be planted in the Spring or Summer without any problems as it is a hardy plant, however if you plant before the plant blooms, then the number of flowers may be affected.

For more information read my article for transplanting lavender successfully.

How Far Apart to Plant and Hedging

Lavender Hidcote grows well in pots and containers, in garden boarders or as a decorative hedge.

Two key consideration when decicding how far apart to plant lavender Hidcote are:

The ideal distance for planting Hidcote is 2-3 feet apart. The more airflow and windy a location is the closer you can plant lavenders although 2 feet apart is as close as necessary.

Lavenders grow naturally in windy coastal areas and they do not grow well in humidity.

With the right conditions (sun, low-medium fertility soil, infrequent watering) Hidcote will grow to a width of around 20 inches which is just over one and a half feet.

So if you intend to plant Hidcote for decorative hedging then plant the lavenders 2 feet apart and they will grow (within a year or two) nicely without gaps (in the Spring and Summer) into a uniform smart hedge.

2 feet will ensure each plant has enough room for their root system to develop without competing for space with its neighbour and the hedge will look spectacular.

Hidcote is a particularly good variety for hedge growing as it is:

In climates of higher humidity the lavender benefits from good airflow so find a windy location in your garden or plant in pots and containers.

Planting in pots or containers can provide more airflow then there is typically in garden boarders which will help prevent fungal diseases that are caused by higher levels of humidity.

Lavender Hidcote is one of the most popular lavender varities due to its low maintainace which includes its resistance to drought and tolerance of heat in full sun.

Lavenders native environment is the dry and arid region of Southern Europe where they thrive with infrequent rainfall, in sandy soils that are well draining and do not retain much water.

Therefore gardeners should replicate these conditions for Hidcote to thrive.

Remember Lavender Hidcote is drought resistant so gardeners have more problems with over watering lavender then under watering.

If you water too frequently then the lavender is likely to suffer from the fungal disease root rot, which causes the lavender to droop. (To learn about all the signs of an over watered lavender and for the solution, read my article, why is my lavender drooping?)

The easiest way to avoid problems associated with over watering is to amend the soil with horticultural sand to ensure good drainage.

If the soil drains well and does not hold much water then the likely hood of the lavender developing root rot because of over watering or high rainfall is much more manageable.

Lavender Hidcote is a low maintenance plant if it is planted in the correct conditions. One of the most important conditions are the characteristics of the soil.

To grow Hidcote successfully it is important to recreate the lavender preferred soil conditions to which they are adapted in the coastal regions of Southern Europe.

Lavender requires soil that is:

If you have naturally sandy, loam or chalky soil in your garden then your soil may not require amending at all and you can plant Hidcote straight in the ground.

However all lavender species do not grow well in slow draining soil with a high clay content, compacted soils or overly acidic soil.

To amend the soil for planting Hidcote then I recommend that you dig a hole significantly larger then the root ball. Redistribute the soil elsewhere in the garden and back fill the planting area with approximately 2/3 compost and 1/3 sand or grit.

Most soils will benefit from added sand this will significantly increase the drainage and balance the fertility of the soil so that it is appropriate for growing lavenders.

I recommend adding grit to soil with any clay content as sand and clay can form a solid cement like structure if mixed together. Horticultural grit ensures the right soil structure so that water can drain away from the roots quickly.

In soils with heavy clay or acidic soils I would recommend that you plant lavender in raised beds or pots where you have control of the soil profile, as amending garden soil that has the contrary to the preferred conditions can be very difficult and time consuming.

To learn more read my article on the optimal soil mix for growing lavenders.

It is important to prune lavenders annually as this will increase the plants longevity, and stimulate the new growth that supports flowers.

Pruning into a nice neat, mound shape will also helps lavender resist the affects of weather, such as snow, ice and wind (Hidcote is cold hardy and can tolerate Winters).

Lavenders that are not pruned every year will grow woody, leggy and produce far fewer flowers.

You can prune lavenders either at the start of Spring (March/April) or in the Fall.

I personally recommend pruning English lavenders such as hidcote in the early Spring as this will stimulate the new, healthy growth for flowering.

Hidcote flowers in May or June, so if your prune the lavender in March or April, then the you will stimulate lots of new growth and the lavender can display lots of flowers.

I have seen much better results in terms of blooms, pruning English lavenders in the Spring then in the Fall whereas French lavenders tend to prefer Fall pruning due to their earlier flowering time.

Cut the top two thirds of flexible growth (do not cut into the woody growth at the base) off the lavender to form a rounded, mound shape.

For a visual guide on what to do, take a look at this YouTube video on pruning English Lavenders.

Hidcote can tolerate cold Winters, with snow, frost and temperatures as low as -15°C (5°F) on occasion so there is not much that the plant requires in terms of maintenance, however there are some best practices:

As with all lavenders, Hidcote prefers sandy soil that is low to medium in nutrients. Adding fertilizer will promote the foliage to grow but with fewer flowers.

The foliage may even turn yellow as a sign of stress due to too much Nitrogen in the soil.

Lavender grows healthiest and exudes a strong scent in poor soils and does not require additional fertilizer or mulching with organic material.

All lavender species have foliage that is deer and rabbits tend to avoid and there are fortunately few diseases that affect lavenders.

However the most common problem is the fungal disease root rot which is most commonly caused by over watering, soils that drain to slowly or areas of high humidity as Hidcote prefers dry conditions that mimic those of the Mediterranean.

These problems are easily overcome with properly preapred soil, infrequent watering and planted lavender in a breezy area.

The symptoms of root rot are drooping appearance with brown foliage. Read my article for solutions to lavender turning brown.