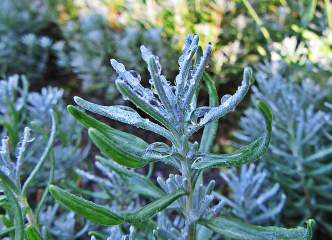 How often you should water lavender depends on several factors, such as how recently the lavender has been planted, whether the lavender is planted in a pot or in the ground, how much rainfall there has been within a two week period and what time of year it is.

How often to water lavender its a delicate balance in the first month after planting but after the first year watering lavender is very simple and low maintenance thanks to its natural drought tolerance due to lavenders Mediterranean heritage.

In fact lavenders are much more susceptible to ill effects from over watering then they ever are with under watering.

Gardeners watering lavenders too frequently is the most common reason that lavender plants die.

To make things as clear as possible I have created a table to use as a guide as to how often to water lavender at its various life stages and different conditions.

Always water lavender deeply with a generous amount of water to encourage roots to grow down and establish. If lavender is watered sparingly then the roots will grow closer to the surface and have less access to water and nutrients.

This advice is assuming that lavender is planted in the right kind of soil that has a porous, friable structure that allows water to drain efficiently. Note that soil can be amended with course sand to achieve the optimal structure.

It can take some time for lavender roots to reestablish into a new environment, whether it is in a pot or planted in the garden. Lavender is valued for its drought tolerance but this applies when the lavender has become established for more then a year.

2 weeks after planting you can water the lavender once per week for the first three months.

If there has been a significant amount of rainfall and many overcast days and the soil feels moist then you will need to skip watering for a few days to avoid over watering.

Always use a generous amount of water when watering lavenders, but it more important then specific quantity of water used is the soils ability to drain water away quickly and not absorb and hold into the water as rich soils do.

The soil needs to have a porous structure that allows water to escape so that it does not pool around the roots and cause root rot. Lavenders are always more under threat from over watering rather then under watering because they are adapted to thrive in dry environments both in terms of weather and soil.

Over watered lavender droops in appearance and the foliage turns yellow/brown as a sign of stress, which can be misleading as the plant may look superficially as if it needs water. For more information look at my article: Why is My Lavender Drooping?

How Often to Water Potted Lavender

Potted lavenders are a little more demanding then lavenders that are planted in the ground.

Potted lavender need to be watered once every two weeks under normal conditions. I recommend watering potted lavenders even if there has been rainfall within a two week period as pots will dry out quicker as they are above ground.

Lavender requires full sun in order to produce the best blooms, oils and fragrance. However, intense direct sunshine and heat will dry out the soil in the pots which is why you should water pots more often, regardless of rainfall.

Only skip watering if the soil feels notably damp after rainfall to a fingers depth, otherwise water the lavender generously.

Remember too much water is more harmful then not enough as lavenders are adapted to growing in very hot and dry environments so don’t water potted lavender more frequently then once every two weeks as over watering is the most common reason lavenders die.

Potted lavenders do not need to be watered often in the winter as they are in a state of dormancy and will attain enough moisture from the weather.

(See more about caring for lavender in the winter).

How Often to Water Lavender in Raised Beds

Water lavender once every two weeks in raised beds during the growing season, if there has been no significant rainfall in a two week period. Only skip watering if the soil is still damp to a fingers depth.

Raised beds are similar to pots in the sense that the soil will dry out somewhat quicker then if lavenders were planted in the ground.

Lavender needs soil that drains quickly and likes to keep relatively dry roots thanks to its Mediterranean heritage where it grows in sandy soils with little rainfall.

Therefore a fairly strict schedule of watering once every two week should be observed, unless there has been significant rainfall and the soil feels moist to a fingers depth.

If the soil is still moist because of rainfall then forgo watering for a few days and test the soil again to see if it has dried out somewhat. I must reemphasize that lavender is drought tolerant but it will not tolerate persistently wet soil so avoid over watering lavender at all costs.

How Often to Water Lavender in Winter

Lavender is a drought tolerant plant that goes into a state of dormancy over winter so you will not need to water lavender very often if at all in the colder months.

The danger is actually that in winter, cold soils do not dry out quickly. Lavender roots hate to be sat in cold, wet soils and it is at this time of year that they are most vulnerable to root rot.

The best way to mitigate this risk is to ensure that you plant lavender in soil that has been amended with plenty of sand or grit as these materials provide superior drainage and they will not absorb and hold onto water in the same way that rich soils that have a high organic content.

If the lavender species is cold hardy (English Lavender Lavandula angustifolia is the only reliably cold tolerant species) and left outdoors over winter then it will attain enough moisture from the weather and you will not need to water them at all.

If you have brought potted lavender indoors for winter protection from frost (French lavenders are not cold hardy) then you may have to water the lavender once or twice over winter so it doesn’t dry out completely. Once every 4-6 weeks will be often enough.

How Often to Water Indoor Lavender

French lavender (Lavandula stoechas ) cultivars grow well indoors and will need to be watered once every two weeks during the spring and summer months as they obviously do not have the benefit of rainfall.

You may need to water indoor lavenders more often depending on the temperature of the room. A warm heated room or draughts from air conditioning can have a drying effect on your lavender so try to avoid placing you lavender in a strong air current.

However Lavenders do like some occasional air flow (from an open window for example) between the foliage, so it is all about balance.

If the room temperature has been particularly high then it is a good idea to check the soil moisture to a fingers depth every so often. At a particularly hot time of year you may need to water indoor lavenders once every 10 days as opposed to every two weeks.

This is because pots are more susceptible to drying and smaller indoor lavender in smaller pots will hold less soil and therefore less moisture for the roots to drawn from.

(Read my article for useful tips about caring for indoor lavender).