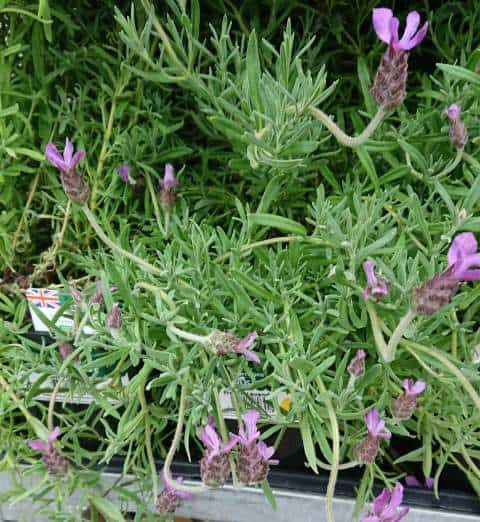 Lavenders are drought resistant plants, so the reason your Lavender is drooping is likely a sign of stress due to over watering rather then under watering. It could also be a sign that the roots are in soil that is either too rich in nutrients or retains too much moisture.

Lavenders are native to the Mediterranean countries of Spain, France and Italy and thrive naturally in sandy, well drained, low fertility soils whilst exposed to full sun.

You do not need to have a garden in a Mediterranean climate to grow lavenders successfully but you will need to recreate some of the conditions in their native environment.

The three most common mistakes gardeners make that lead to lavender drooping are:

The roots like to be kept nice and dry between spells of rainfall and periods of watering.

Lavenders that are watered too frequently develop a drooping appearance with possible browning or yellowing of the foliage, which to the untrained eye may look like an under watered plant.

Some gardeners then compound the problem by assuming the lavender needs more water due to the drooping appearance and the roots begin to rot because of over expose to water.

Lavender also need porous soil that allows water to drain through quickly with holding onto too much moisture.

If you have clay soil or rich compost that tends to stay damp then this will cause water to remain around the roots and for the lavender to droop or wilt in appearance.

Lavenders also appreciate soil that is sandy and therefore has a medium to low nutrient density. Overly fertile soils (or the addition of fertilizers) will stimulate foliage growth and promote a leggy, drooping lavender that displays few flowers.

Keep reading to learn how to avoid these mistakes and what you can do to solve drooping lavender:

Less is more when it comes to watering lavenders. During the growing season (Spring and Summer) you will only need to water your lavender once every two weeks if there has been no significant rainfall in hot, and dry climates like the Mediterranean or southern California.

If there has been a lot of overcast, cooler days with some rainfall then lavenders will not require any water at all and you can wait for another 2 week dry spell before watering.

If you are in a climate with frequent rainfall then established lavenders (over 2 years old) will not need watering at all thanks to their drought tolerance (hence lavenders reputation as a low maintenance plant).

Keep to an infrequent watering schedule throughout the year and don’t be tempted to water lavenders more then this as all varieties will droop and eventually die if they are persistently over watered.

English lavenders that are kept outside in temperate climates will not need watering over winter as the lower evaporation rates and probable rainfall will be more then enough to sustain them over winter.

The Spanish, French and Italian lavender species do not tolerate cold winters as well as the English species so should only be grown in warmer climates that do not experience significant frosts in the winter.

The non English lavender varieties are unlikely to need much watering over winter at all, however if it has been an unusually dry winter, then give them some water once every month until spring.

The only time Lavenders need more water and attention is when they have just been planted or transplanted.

Lavenders can suffer transplant shock when they are moved and will require more water in the first month (water them once per week, after a month resume a normal once per 2 weeks watering schedule).

The thing to remember with lavenders is that they prefer dry conditions with little water and can regularly tolerate droughts thanks to their Mediterranean heritage so think about recreating these conditions.

Water once every two weeks with around 1 litre (35 oz) only if it has been dry and forgo watering if there has been any significant rainfall.

Lavenders will recover from their drooping appearance if you have been watering them too frequently but leave it dry for at least 3 weeks to recover so the roots can dry out and recover properly.

If you are following the correct guidelines when it comes to watering lavenders and yet the plant is still drooping then it is more then likely the soil the lavenders are in is too moist.

Lavenders originate in the sandy arid regions of the Mediterranean with intense sunshine during the summer.

They prefer soil to be sandy, if not slightly rocky, so it doesn’t absorb and hold on to water (like rich compost) and it allows water to drain away from the roots easily due to its porous structure.

Water retaining soils that do not see enough sun will natural be more damp and you will see the same symptoms as over watering (drooping appearance and a browning of leaves) and the lavenders roots will rot and die when constantly exposed to wet soil.

The roots of the lavender need to be in dry soil for the plant to be healthy, prevent drooping and to produce a good bloom of flowers.

There are three options to improve drainage and stop lavenders from drooping:

If your lavenders are in a low lying part of your garden that naturally accumulates soil moisture then the best options are to either transfer them to pots or raised beds so that they are out of damp prone soil and you can easily amend their new soil medium with sand or grit.

Lavenders of all varieties do exceptionally well in raised beds and pots as they often provide much drier conditions for their roots then if they were planted in garden soil.

If your lavenders are planted in the ground then you will have to ease them out with a fork and move them to one side, before mixing in a good quantity of sand or grit to the soil, so that it is more porous and drains more effectively.

Whether you are planting lavenders in pots, raised beds or in the soil, you should aim for at least 30% sand or grit to 70% soil or compost.

In soils that contain significant clay I recommend a ratio up to 50:50 grit to soil. The grit will create air pockets in the slick, water retaining clay so that water can infiltrate.

The best time of year to do this is in the late winter or very early spring as this will minimise any transplant shock to the plant. However if your plant is severely drooping because of poor soil drainage you will need to amend the soil as soon as possible.

Once you have added your grit or sand (both work well) then you should use a hose and water the soil to see if drainage has observably improved. The water should drain away from the surface in a matter of seconds after a good soaking from a hose.

When you are satisfied with soil drainage, replant the lavenders and the drooping appearance should alleviate and go back to a healthier plant in 1-3 weeks.

Sand and grit are also low in fertility which will counteract higher fertility soils. Lavenders tend to grow more foliage and produce less flowers when in fertile soil, hence why they flower best in poor soils. Check out my article for the full checklist of conditions that promote blooms in lavenders.

Another cause of lavenders with a drooping or wilted appearance is soil that is high in fertility or the gardener has added fertilizer necessarily.

Rich soils with lots of nutrients are great from growing roses and other heavy feeding plants but these soils are not suitable for growing lavenders.

Lavenders grow best in the sandy, nutrient poor soils of the Mediterranean. The excess of nutrients in more fertile soils will fuel foliage growth at the expense of blooms and give lavenders a leggy or drooping appearance.

The same effect will happen if you add fertilizer to lavenders. Lavenders do not need any additional fertilizer and they will happily obtain all the nutrients they need for their sandy soil (as verified by the RHS).

Check out my article for the full checklist of conditions that promote the most blooms for lavenders.

If you have used fertilizer and ended up with a drooping lavender, then don’t despair. You may have to reconcile with a poor bloom that season but prune back the excessive growth in late summer and your lavender should recover by the next growing season.

If you suspect your soil is too fertile for lavenders and is the cause of the drooping or wilting appearance then I recommend digging up the lavender (in late winter or early spring) and adding plenty of sand to the soil.

Sand is naturally low in nutrients and it will go some way to counteract the high fertility of the soil, thus providing more suitable conditions for lavender. Aim for roughly 30% sand to 70% soil in the planting area.

This will ensure good drainage and the right nutrient balance which should prevent lavenders from drooping and replicate their ideal conditions for producing flowers.

Replant the lavender immediately after amending the soil and give it a good soak. It may take another year for the lavender to be at its best.

The cause of a lavenders drooping appearance can be attributed to overly fertile soils, the addition of unnecessary fertilizer, too much watering or the lavenders roots are in soil that retains too much water.

The drooping shape is often accompanied by a browning or yellowing of the foliage which is a lavenders sign of stress.

The way to resolve a lavenders drooping appearance is to drastically cut back on watering or to replant them in soil that has been amended with sand or grit.

The sand and grit will help to improve drainage significantly so that the roots remain relatively dry and do not succumb to root rot. Lavenders roots that are persistently exposed to wet soil will simply rot and die.

If the drooping is due to watering then lavenders can recover within 1 to 3 weeks.

However if the lavenders drooping appearance is to do with high fertility soils then it will require the addition of sand or git to the soil which will effectively reduce the nutrient density of the soil.

It will likely take a lavender another season to recover from added fertilizer, but by the following growing season it should have a better appearance and produce more flowers.