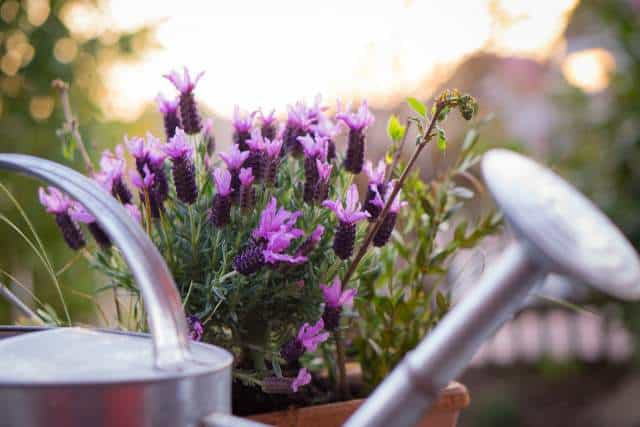 Lavenders in pots will only need watering once per week during the growing season in the first 2 years of planting. Once fully established potted lavenders only need watering sparingly once every two weeks if there has been no rainfall.

Lavenders are natives of the Mediterranean where they thrive in sandy, nutrient poor soils, in full sun with very little water.

The most common reason potted lavenders die is because they are over watered. One of the first symptoms of an over watered lavender is general wilting appearance and the leaves turning brown.

It is at this point some gardeners make the mistake that the lavender is not receiving enough water and actually end up compounding the problem with more watering.

Always water lavender in the morning which gives the soil a chance to dry during the day so moist conditions do not linger overnight.

Keep reading to find out exactly how often you need to water potted lavenders in the first year of planting, how often to water established lavenders, how to avoid over watering lavenders and what pot is best for lavenders…

How Often to Water Lavenders in Pots

When watering lavender its important to remember the plant is native to the Mediterranean, so it thrives on full sun and little water in fast draining, nutrient poor, sandy soils.

Therefore Lavenders are at far more at risk of over watering then under watering when cultivated by gardeners.

Established lavenders in the ground (at least 2 years old) generally do not need watering in most temperate climates and only very occasionally need water during drought like conditions.

Potted lavenders however need a bit more care and attention then lavenders planted in the ground as pots are more susceptible to drying out completely as pots can heat up in the sunshine which accelerates the drying of the soil.

Potted lavenders will need to be watered once every two weeks during the growing season with around 35 ounces of water (1 litre) if there has been no rainfall and persistent sunshine.

Water in the morning, at the base of the plant and try to avoid dampening the foliage.

If the weather has been partially overcast and there has been some rainfall then potted lavenders will not need any additional watering.

This may feel like neglectful gardening but lavenders thrive in droughts and poor soils where other plants would perish thanks to their Mediterranean heritage!

The same watering advice applies to all varieties of lavender and their various hybrids.

The only significant difference in care between potted English lavenders and potted french or Spanish lavenders is that the English varieties are far more tolerant of frosts and cold winters whereas the more delicate Spanish and french lavenders will need taking inside to a frost free environment over winter.

All varieties are drought tolerant, thrive in pots and will produce beautiful aromas and stunning flowers if cared for properly.

Lavenders that have just been transferred into a pot will need more care and attention in the first year as the settle into their new home.

Lavenders can suffer transplant shock when you move them to a significantly different environment, for example, the garden store to your own home garden in a different pot. This generally happens a week or so after planting.

Transplant shock may manifest itself as drooping leaves and stems which superficially looks like an under watered plant, however this is just a stress reaction to its new environment and will likely only last a week or so.

Water the soil before planting and water around the base of the lavender after you have planted it in the pot and place it in a sunny spot.

Do not be tempted to water it again during the first week of planting and give it time to adjust to its new environment and the symptoms of shock will pass.

Whilst the roots are establishing on a newly planted pot lavender it is a good idea to water about once per week for the first four weeks after planting.

After four weeks you can reduce watering down to once every two weeks during the hot weather of summer, but if it has rained significantly then you will not need to water. More water will do them more harm then good.

Water new lavenders in their first season, every two weeks (depending on the rainfall) up until September when the temperature decreases and the soil doesn’t dry out as quickly lavenders are preparing for a period of winter dormancy.

During winter if you have an English Lavender variety you can leave the potted lavender outdoors and it will receive enough moisture to sustain itself comfortably.

French or Spanish lavenders on the other hand need to be taken in over winter as they do not tolerate frosts. They do not need much water over winter but they will need some, so give them a good drink once every 6 weeks, until the return of Spring.

Remember…Lavenders always put on their best display of flowers after the first year of growth, so it pays to be patient!

The lavender roots will benefit if you layer the bottom of the pot with about 1 inch of gravel to provide air pockets, so that soil does not become compacted at the bottom and slows the drainage of water out of the pot.

If the lavenders roots are exposed to damp soil for any length of time then you are risking root rot which will kill the plant.

The pot needs to have enough drainage and be 16 inches in width and a depth of at least 12 inches to accommodate a mature lavender.

If you can keep the pot off the ground with some pot feet (available from garden stores) or propped up with stones then this will ensure that water can escape freely and drain away properly rather then pooling underneath.

A common mistake with potted lavenders, particularly if the plant is indoors is to have a saucer or plate at the bottom of the pot to stop water spilling out. Collecting water in the pot can lead to waterlogged soil and root rot will take place and kill the lavender.

How to Avoid Over Watering Lavenders in Pots

Over watering is the biggest threat to your lavender. Lavender in damp soil will develop root rot and unfortunately die. However there are steps you can take to minimise this risk:

If you follow these four steps you lavender should put on a good display of flowers and exude its distinctive summery fragrance.

link to How to Revive Dying Petunias

Petunias are tender annual flowering plants that do not tolerate frost or cold temperatures and die back in Winter. Dying and wilting petunias are because of fungal diseases such as root rot,...

Continue Reading
link to How to Water Mint Plants

Water mint plants twice a week with a thorough watering so that excess water trickles from the base of the pot or container. Mint plants require the soil to be evenly moist but not saturated to...