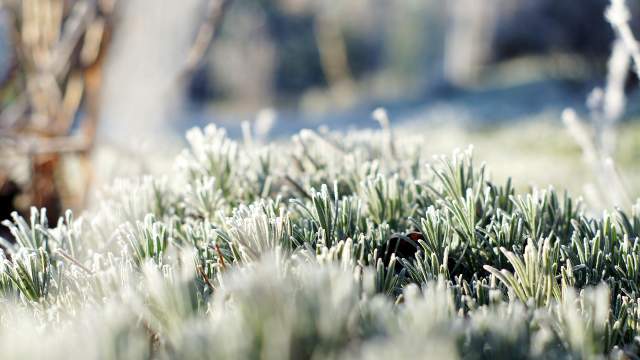 English lavender species are hardy, so can survive outdoors throughout winter and tolerate frost. Whereas Spanish, French and Italian lavenders are not frost tolerant and will need to be transferred to pots and taken indoors over winter, if they’re in a climate that receives regular frosts.

Whilst frosts are the most common reason for lavenders not surviving winter there are a few other causes that you need to be aware of such as:

However with a few adjustments you can ensure that your lavender will tolerate winter and thrive in the summers. Keep reading for solutions and best practices to safeguard your lavenders over winter…

English Lavender varieties, are the only lavender species which is cold hardy and will regularly survive winters in colder climates, despite frosts and snow.

The Popular English variety lavender Hidcote Superior can even reportedly survive temperatures up to -30 °C (-20 °F) during winter. Although in general any Lavandula angustifolia (English Lavender) will do well in temperate climates as long as they are cared for properly.

Interesting fact: Although they are named ‘English Lavenders’ this species is not native to England. It originates in the Mediterranean region of Europe as all lavenders do, but has been called ‘English Lavender’ due to its ability to thrive in the colder English climate and has been cultivated in England into many different varieties since the 1600’s and admired for its fragrance.

The Spanish, French and Italian species of lavenders are far less tolerant of cold and are well suited to the mild winters experienced in the Mediterranean region where temperatures typically stay well above freezing.

So if you live in a warmer climate with mild winters then you will be able to grow any lavender species successfully as long as they are cared for properly. If left outside during winter in temperate climates, the non English lavenders will likely die.

However if you plant non English lavenders in pots and take them indoors over winter (before the first frost) then you can successfully grow them in climates that experience regular winter frosts.

If you live in a cool temperate climate and you want to keep lavender outdoors all year round then the English Lavender species is the best option.

Aside from frosts and sub zero temperatures, the soil condition can also kill off lavenders if the soil is unsuitable.

In winter with the cooler temperatures, the rate of evaporation is much slower. Cold, damp soils that retain moisture for longer can cause the disease ‘root rot‘, which can kill the lavender if you don’t intervene.

Lavenders grow natively in the Mediterranean region of Europe where they enjoy quick draining sandy or gravelly soils that do not hold onto moisture, and they thrive in drought-like conditions with infrequent watering.

Rich soils that contain a lot of organic matter have a great capacity to hold onto moisture, which will make conditions more favourable for root rot and other fungal diseases and the soil may even hold too much fertility which is contrary lavenders preferred low to medium fertility soils. (If your lavender is not blooming, take a look at my article for the solution).

To ensure winter survival you need to amend the lavenders’ soil so that it has good drainage with a relatively open, porous structure that allows water to escape easily.

Lavender grows very well in general potting soil that has been amended with sand or gravel which replicates the ideal growing conditions of the lavender’s Mediterranean homeland.

A ratio of 70% potting soil and 30% sand or gravel is often recommended but with soils in colder climates that have higher levels of rainfall, a 50:50 mix can be required to ensure the lavenders roots do not sit in cold, damp soil for extended periods.

Amending the soil is obviously a lot easier to do prior to the planting of lavenders.

However it is still possible to do by easing the lavender out of the ground with a fork and mixing in sand or grit to the soil with a tiller or spade to a depth of around 18 inches and a width of 12 inches (to accommodate the root system of a lavender at maturity).

Take a look at my article for more information on the ideal soil conditions for lavender.

Alternatively if you do not want to amend the soil in your garden, you can always transfer lavenders to pots which provide very favourable drainage conditions and requires much less labour. For more information on how to do this please read my article for advice and best practices of growing lavenders in pots.

Move Pots Inside Over Winter

As discussed the English Lavender species can be left outside over winter. However you can still grow the Spanish, French and Italian varieties in cold climates if they are potted and you bring them indoors before the first frost.

All lavender species grow very well in pots as the drainage conditions are favourable and you can easily place them in full sun and control how much water they receive by protecting them from rain.

All Lavenders enter a state of dormancy over winter and do not require much water (water them once every 4-6 weeks during winter) but the do need to be exposed to sunlight and ideally avoid the more humid rooms of the house such as the kitchen or bathroom where they could encounter lots of steam (Lavenders prefer drier conditions).

Place the potted lavenders in the sunniest window in your house and enjoy the fragrance over winter. Alternatively they can place them, over winter in a heated green house, as long as the temperature remains above freezing.

Read my article for a helpful guide and best practices of indoor lavender care.

Pruning lavenders every year will help the plant survive winter and will serve to prolong a lavenders life in general.

The lower stems at the base of the lavender become more woody over the course of its life.

Regular pruning in the early spring and late summer help delay the formation of woody stems which is necessary as it is the new shoots that produce flowers and not the old wood. Not to mention the wood is less resilient and prone to splitting in winter thanks to snow, frost and water damage.

When woody stems break over winter they do not usually grow back, so that lavender remains damaged.

Regular pruning of lavender will:

Pruning is best done in the early spring where you should remove about a third of the soft green growth and aim to shape the lavender into an even mound so the foliage is nice and compact.

More compact foliage will prevent snow and ice getting into the lavender and therefore resist the effects of winter better.

Typically I see best results from a late summer prune where the spent flower stems are trimmed back for a more tidy, uniform appearance ready for winter. This is followed by a Spring prune early next year to promote the growth of new stems that will bear this years flowers.

Cut the soft green growth back by a third but do not cut back into the woody stems as they are unlikely to produce any new growth and you could kill the plant.

For a visual guide on lavender pruning take a look at this YouTube video: