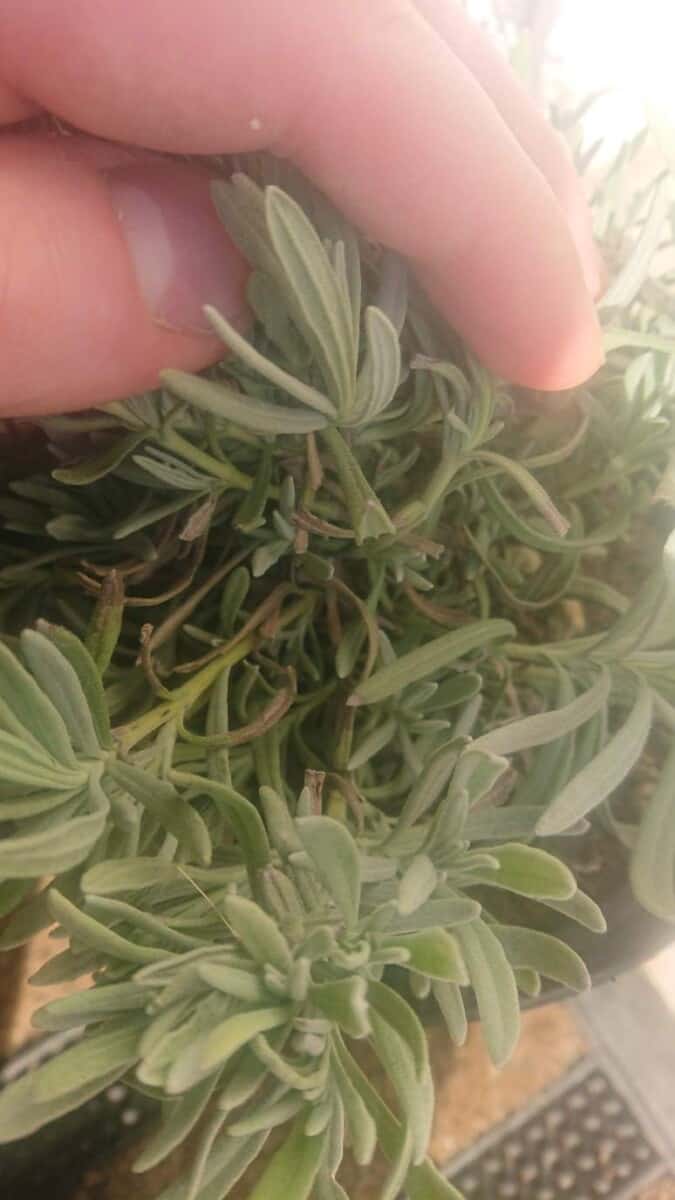 Lavender can turn gray because of frost damage or as a result of a fungal disease, caused by over watering or slow draining soils. Usually the fungus botrytis spp is responsible for lavender leaves turning gray although there are a few pathogens that may cause lavenders to turn gray.

Fortunately, the treatments and the best practices for preventing the various fungal diseases that may cause lavender to turn gray are the same.

It is worth noting that there are many different lavender varieties, and lavender leaves range from a dark green to a silvery, almost gray colour, so your lavender may well be okay.

The fungal disease botrytis spp is the most common cause of lavender leaves turning gray and this typically happens to foliage near the base of the plant.

Lavenders of all species originate in the dry and breezy coastal conditions of the Mediterranean in Europe where they are accustomed to well draining, sandy soils, with low to medium soil nutrients.

It is in these conditions that lavender grows its best and remains disease free. So to grow lavender successfully, gardeners should try to recreate these soil conditions to prevent fungal disease that turn lavender gray.

Fungal diseases are promoted in the following conditions:

How to Treat Lavender with Gray Foliage

The treatment for lavender with fungus is generally the same. If you treat the lavender in time there is a good chance that it will recover from the fungal disease that caused the gray foliage and the lavender should grow normally next year.

Lavender does often recover from botrytis spp and other diseases that cause it to turn gray when treated so don’t be alarmed.

It is still necessary to snip away any diseased parts of the plant to give the lavender the best chance of recovery.

Do not use any moisture retaining mulch (such as leaf mould) around the lavender and clear away any dead leaves or organic matter from around the plant so that the soil has a chance to dry out and the roots stay healthy.

Avoid overly nutrient rich soils, soil amendments such as manure or the use of fertilizer. Lavender prefer low to medium nutrient soil. If there is too much nitrogen in the soil the lavender will grow leggy with lots of foliage that is more susceptible to fungal disease.

Always amend the soil with sand or grit before planting lavender to allow for good drainage and to create the soil conditions that lavenders prefer. Lavender thrive on neglect and remain their healthiest, strongest smelling and display most flowers in harsh, dry conditions.

Water lavenders at the base of the plant rather then overhead to reduce the amount of time foliage is damp which would promote the conditions for fungal disease.

(For more information, read my article, how often to water lavender).

Always plant lavender in full sun for a healthy, disease resistant plant with a strong fragrance and good display of flowers.

(To check the moisture of your soil around the roots of your lavender plant to ensure the soil is not too damp, try using an inexpensive soil gauge which also measures the soil pH and intensity of sunlight. This soil gauge is easy to use and available for a great price on Amazon!)

It is possible that lavender foliage looks gray or brown due to frost damage or it may be just last years growth that require pruning. English lavenders are cold hardy and will survive cold winters with snow, frost, ice and freezing temperatures.

Avoid Spanish, French and Portuguese lavenders as they are not cold hardy and often suffer in climates with cold Winters.

Here is a useful YouTube video which shows what last years grey foliage looks like in the Spring and how to prune it back effectively:

(For all the best care practices, read my article, how to grow lavenders in pots).