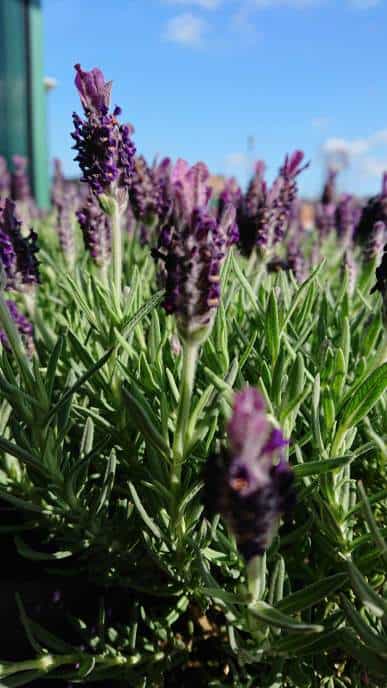 To increase the amount lavender blooms, plant lavender in full sun, with sandy soil and prune in the Spring to stimulate more growth to support more blooms.

Watering lavender too frequently and adding fertilizer can stress the plant which causes fewer blooms.

Deadhead any brown flowers to redirect the plants energy to producing more flowers rather then seeds. A white, stone mulch provides a reflective surface to increase the brightness around your lavender which will result in an increase in blooms.

The most significant factor that contributes to how well lavender blooms in the Summer is the amount of sunlight the lavender receives.

Lavenders are adapted to a life of full sun, in dry conditions, growing naturally in countries such as Spain, Italy and Portugal in breezy coastal areas and produce the best yields in terms of blooms, oils and the strength of the fragrance when in with full view of the sun all summer.

The less sun the lavender receives, the fewer blooms will be on display and there will be poor, leggy growth that is more susceptible to disease.

If possible move your lavender to the sunniest location in your garden (at least 6 hours of sun) in an area with good airflow which helps to reduce the risk of fungal disease and keep the plant healthy.

Consider transferring your lavenders to pots or containers so you can move them into the sun, if you have fewer options for planting areas in the garden boarders.

Commercial lavender growers always have their best years in terms of flowers, oil production and aroma of the foliage on the years with the driest, sunniest summers.

2. Prune in the Spring to Stimulate Blooms

Lavenders can be successfully pruned in the Spring or Fall, depending on preference. However, I have spoken to commercial lavender growers in Washington USA that insist pruning in the Spring is best for increasing a lavenders bloom.

This is because lavenders only produce flowers on new seasons growth.

When a gardener prunes lavender it helps to stimulate new growth with a greater number of stems and foliage. The blooms of this year will only be displayed on the new growth and with more new stems there is more opportunity for flowers.

Prune lavender in March or April and the new stems will grow with abundance in time for flowering.

The old growth of lavender is unproductive (particularly the woody base) which is one of the reasons why it is so important to prune annually.

For a visual guide to Spring pruning from a lavender farmer, watch this YouTube video:

Lavenders are plants that thrive on neglect with low watering requirements and a preference for low to medium fertility soils.

These characteristics are due to the lavenders adaptions to the harsh conditions in their native Mediterranean range, with little rainfall and sandy soils that are low in nutrients.

Lavender thrive in these conditions and produce the most blooms and strongest aromas when gardeners recreate some of their natural conditions.

Do not add fertilizer or plant lavenders in rich soil as this will promote leggy foliage growth at the expense of flowers.

Instead you should try to replicate their preferred soil type by amending the soil with a good amount of horticultural sand or grit to ensure good blooms.

When plant or transplanting, add roughly a third by volume of sand or grit with two thirds compost or potting soil as this mimics the soil conditions in which lavender thrive.

Sand and grit help to balance the levels of nutrients of the compost so that the soils are low to medium fertility and create the optimal conditions for lavenders to bloom.

Sand will also help to increase the drainage of the soil which is vital for maintaining the appropriate soil moisture so that the lavender roots can remain healthy (lavenders prefer dry soil, between bouts of watering).

(To learn more about this read my article on the optimal soil mix for lavenders).

One of the key factors that influence the number of blooms for a lavender is the frequency of watering.

Lavenders are drought resistant plants thanks to their Southern Europe origins and actually prefer dry conditions.

Water lavenders too frequently will be to the lavenders detriment and as a sign of stress the lavender will droop or wilt in appearance and produce fewer blooms in the summer.

Established lavenders (that have been planted for more then three months) often do not require any additional watering at all and will attain all the moisture they require from rainfall even if it is relatively infrequent.

Only water lavenders if there has been no rainfall and blazing sunshine for two or three weeks. Lavenders in pots occasionally require more watering and to avoid problems it is important to choose the right pot for lavenders.

Remember that lavenders actually prefer, almost drought like conditions so gardeners often cause more problems because of over watering then they do under watering.

Keep the watering frequency low and your lavender will be nice and healthy so it can produce an impressive bloom.

(For a more detailed explanation of watering lavenders in different conditions, read my article how often to water lavender).

6. Use a White Mulch

This is one of the more unconventional tips I have picked up over the years that I learned from a commercial grower in California.

Lavender always blooms more when the summer has been particularly sunny.

Sun is such and important factor for increasing blooms, that using a white, reflective mulch such as lime stone or just any decorative white gravel can reflect sunlight back on to the lavender plant and increase the overall brightness of an area and therefore increase the number of blooms for your lavenders.

The growers I have spoken to insist this is the best way to increase blooms and also that the foliage smells particularly strong.

The mulch will also help to keep weeds at bay and the increase brightness will drive evaporation around the foliage which is beneficial for reducing the risk of fungal diseases.

Deadhead the the flowers of your lavender as regularly as possible to increase blooms.

As soon as the flowers turn brown snip them off and this will stimulate the plant to produce more blooms rather then direct its energy into producing seeds.

The lavender produces seeds in the brown flower heads so you can leave the flowers if you intend to collect seeds. However growing lavenders from seeds is more tricky and detailed then propagating lavender from cuttings.

By deadheading regularly the lavender will look healthy and the blooms can increase significantly particularly for the lavender species that flower the longest (French and Spanish lavender can start flowering in the Spring/Summer and carry on flowering until the Fall, the hotter and sunnier your climate, the longer the flowering season for most lavenders).