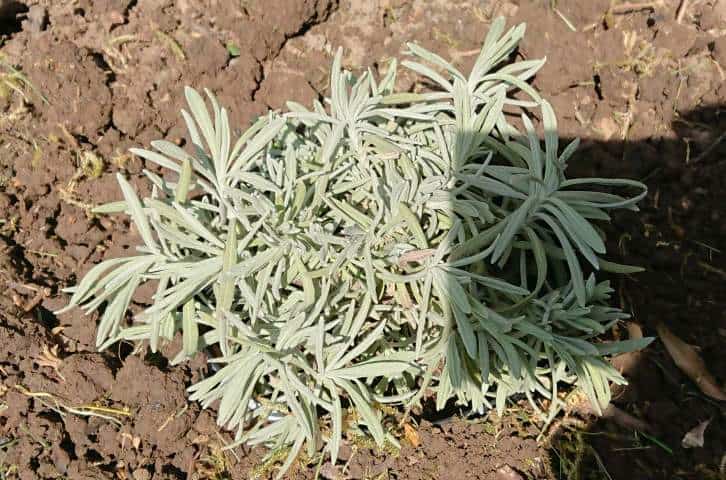 Lavenders are drought resistant plants when established after several months, but require a key balance of watering after planting to help the roots establish.

The key is to strike a balance between watering the new lavender sufficiently to mitigate transplant shock and to not water it to the point where the soil is saturated or consistently moist.

Watering newly planted lavender is all about watering consistently enough so that the roots establish without the soil being consistently moist. Lavenders thrive in hot and dry conditions after they have adjusted to their new surroundings but this will take a few weeks.

Watering too frequently will cause the soil to be moist and the plant will wilt as a sign of stress.

To ensure that your lavenders establish properly without wilting you need to know exactly how much to water them according to the conditions.

Note that you should always give lavender a generous soak when watering. Think ‘soak and dry’ rather then ‘little and often’ when watering lavender to ensure that the roots grow well and establish in the soil.

There is far more risk of over watering lavender then under watering due to there drought resistant nature.

Once you have scaled back the watering and the soil has a chance to dry out then the lavender should return to a more normal appearance.

2. Plant with the Appropriate Soil

Lavenders love well draining soil as this mimics the soil conditions of their native Mediterranean range, therefore the soil should be:

If the lavender is planted in heavy soil such as clay (which is slow draining) or near boggy ground the the soil could be too moist for the lavender which could be why its wilting and potentially cause root rot.

Dig a hole that is significantly wider then the lavender’s root ball and back fill the hole with around 1/3 horticultural sand or grit and 2/3’s compost.

(For more on this read my article the optimal soil mix for lavenders.

This will ensure that the lavenders soil structure mimics that of the coastal Mediterranean (which is their natural habitat) and drains the appropriate amount.

If your garden soil is heavy clay then I always recommend planting lavender in pots as you have control over the soil profile and can add sand or grit to easily create the right conditions.

It sometimes comes as a surprise to gardeners that lavender actually prefer low to medium fertility soil.

If the soil is too nutrient dense then the high nitrogen concentration will promote excessive stem and foliage growth with fewer flowers which can cause a wilting appearance often with yellow leaves.

Horticultural Sand or grit are the perfect soil amendments to provide the optimal balance of soil nutrients to counteract overly fertile soils or compost, to help recreate the low to medium fertility soils that lavender require to thrive and produce strong aromas and a display of flowers.

Avoid using enriched compost when planting lavenders and add some sand into the mix to avoid high nitrogen levels which leads to a wilting plant.

3. Do not Fertilize Your Newly Planted Lavender

Avoid adding fertilizer of any kind of new lavenders as fertile soil is contrary to their preferred soil conditions.

Lavenders will attain all the nutrients they require from some compost mixed in with the sand or grit as you are planting.

Added fertilizer will cause your lavender to grow leggy and wilt for the same reasons as nutrient dense soil.

Lavenders grow their healthiest, smell there best and produce the strongest blooms in medium to low fertility soils, which is in contrast to many plants but these are the conditions that lavender have adapted to.

If you have added fertilizer and your lavender is wilting I recommend transplanting your lavender to another pot or area of the garden with new soil as a matter of urgency.

Lavenders that are stressed because of fertilizer are often more susceptible to fungal disease.

Once transferred to new soil the lavender should make a full recovery.

This will push all the air out of the soil which will reduce soil respiration and soil drainage, both of which can cause lavender to wilt.

Amending the soil with horticultural sand or grit rather then fine sand will ensure that the lavender soil has a more porous and open structure that allows for exchange of oxygen and carbon dioxide for root respiration and ensures water can infiltrate the soil.

The only time I see newly planted lavenders wilting because of a lack of moisture in the soil tends to be when they are planted in pots that are very small.

Plant lavenders in a pot that is around 12-16 inches across even if it is a smaller variety such as lavender Hidcote Superior.

If the pot is too small and made of plastic or metal then the pot can quickly heat up and drive soil evaporation to a level where the new lavenders roots does not have sufficient time to absorb the water it requires and cause the plant to wilt even with the appropriate amount of watering.

Planting lavender in a pot with that is 12-16 inches across ensures that the pot has the capacity for enough soil, so that the lavenders roots have enough space to properly establish and absorb enough water and access enough nutrients.

Transplant your new lavender in to a bigger pot and give the soil a good soak so that water trickles out the bottom and the wilted lavender should recover.

To learn about which pots and containers are best more read my article on choosing the right pot for lavenders.

5. Pots Without Drainage Holes Cause Wilt

Another problem for new lavenders in pots is ensuring they are well drained.

A common mistake when planting lavenders is to plant them in pots either without a drainage hole in the base or to use a drip tray to catch water as it flows out the bottom.

Pots with inadequate drainage will just collect water which causes the soil to be consistently moist. Wilting is on of the first signs of stress from soil that is too moist because the water cannot drain away.

Lavenders grow particularly well in pots as they often have more favourable drainage conditions then garden soil, but the pot must have a drainage hole in the base in order for it to grow healthy.

Transplanting the lavender to a suitable pot or container and allow the soil to dry out between watering. The wilted lavender should recover in a few days.

Fore more information on how to care for lavenders check out my articles on lavender ‘Hidcote’, lavender ‘Munstead’, lavender ‘Grosso’, French lavender and lavender in pots.