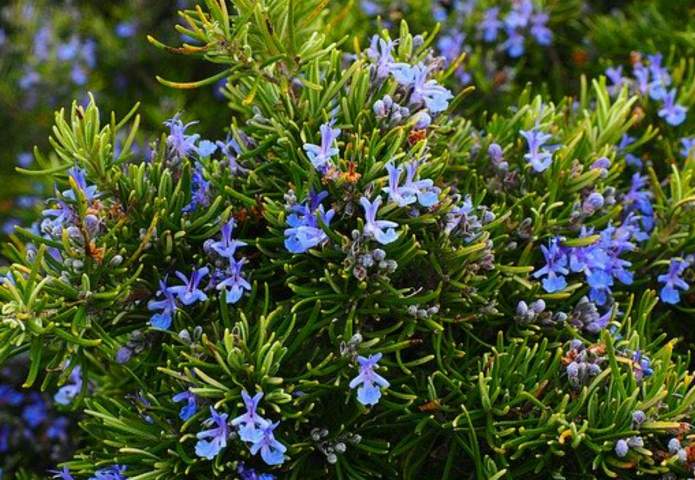 The reason for rosemary not flowering is often because of excessive nitrogen fertilizer which promotes foliage growth at the expense of flowers. Rosemary usually flowers best the year after planting and requires full sun and well draining soils to flower as it will not bloom in the shade.

A harsh prune of a rosemary plant can also cut off the developing flower buds which prevent the rosemary from flowering.

Rosemary is a Mediterranean herb that thrives in nutrient poor sandy soils in the South of Europe, often growing wild on hillsides and by the coast where it can flower almost all year round.

Rosemary has specifically adapted to the sandy soils in their environment which tend to be low in nutrients, porous and well draining, therefore rosemary is not a heavy feeder in terms of nutrients.

To grow rosemary so that it displays flowers in the growing season it is important to replicate the soil conditions of the rosemarys native environment which increases the chance of rosemary flowering.

If you do not add any more fertilizer to rosemary it should be able to recover and increase the chance of flowering by the next season.

If the soil is rich then I recommend amending the soil with sand or perlite.

This is obviously quite difficult if the rosemary is large and established, but if you are transplanting the rosemary or the rosemary requires re-potting then this is a good opportunity to add horticultural sand or grit to the soil mix.

Add roughly 20% sand or grit to 80% compost or potting soil to a pot or planting area improve the drainage which increases the health of the plant and balances the nutrient profile so that it replicates the rosemarys preferred Mediterranean soil (in climates of high rainfall I recommend 1/3 sand to 2/3 compost).

With the improved drainage (which decreases water stress) and a lower concentration of nitrogen in the soil, the rosemary should have a better chance of flowering.

Not Enough Sun Light for Flowering

Rosemary grows best in full sun in open areas where there is no shade cast by other plants. Sunlight is directly correlated with the display of flowers and the strength of the aroma and taste from the leaves.

If rosemary is planted in a shady location it will be to the detriment of the plants healthy and the rosemary will not be able to grow well or flower.

Rosemary does not last very long in the shade so I recommend that you transplant it or move the pot to a location of full sun (more the 6 hours) and an area with good airflow which reduces the risk of fungal disease.

Do bear in mind that whilst rosemary grows very well in cooler climates with a more northerly latitudes (with the right care) then the Mediterranean region, there will be a shorter growing season and less heat which can limit growth and flowering compared to the optimal warmer sunnier conditions of Southern Europe but as long as it is planted in full sun there is a good chance of flowers.

Rosemary With Poor Health may not Flower

Another reason why rosemary may not flower is due to the plant being in bad health. The most common reasons for rosemary not growing and flowering its best are:

Rosemary does not like to be root bound as this can limit access to nutrients, water and stress the plant. Plant rosemary in a pot that is around 16 inches across.

This will ensure that the pot has the capacity for enough soil to insulate the roots during winter and that the root system has enough space to establish.

One of the most significant factors for the health of rosemary is that the roots should not be in soil that is consistently damp.

Rosemary is adapted to blazing sunshine, infrequent rainfall and well draining sandy soils that do not hold moisture.

If the roots are in damp soil, then there is a significant risk of root rot and fungal disease that can stress the plant and cause it to turn brown, black or yellow (depending on the fungal pathogen).

For more information read my article on how to revive dying rosemary plants.

Other symptoms of a water stressed rosemary are drooping appearance and fewer flowers in the Spring and Summer.

A rosemary that is stressed due to over watering will not be able to flower properly and not live very long.

In climates with high rainfall it is even more important to amend the soil before planting or transplanting rosemary with sand and grit to increase the drainage so that the roots can dry out to prevent root rot.

With the right balance of watering, rosemary will be more healthy which increases the chance of flowering rather then suffering from water stress.

Rosemary responds well to pruning as it stimulates more growth in terms of stems and leaves for cooking.

However pruning at the wrong time or pruning too harsh can limit the number of flowers as you may be cutting away flower buds.

Rosemary can flower at several times through the growing season, especially when it is in a warm dry climate with lots of sun and can even bloom during mild Winters.

Early Spring is the best time to prune if you want the rosemary to flower. An early Spring prune stimulate new growth which can display more flowers, whereas pruning later in the season can cut back the forming flower buds.

Rosemary can still form new flower buds if it is cut back a bit later but this will likely delay or perhaps prevent the plant from flowering depending on the conditions.

You can of course selectively prune some stems for cooking purposes and leave other stems for flowers later in the season.

Pruning will also prevent the rosemary from becoming leggy or too woody which is important as the woody growth is far less productive in terms of growth new shoots and displaying flowers hence the importance of annual pruning.

Watch this YouTube video for how to prune rosemary in Spring so that it promotes growth of stems and displays flowers.

Time For Rosemary to establish Properly in the Soil

It is very common with mediterreanean plants to take at least a year to not just establish in the soil but to adjust to the specific conditions of the garden before it can flower.

This may be due to a contrast between the growing conditions of the garden center and the conditions of your garden which can take time for the rosemary to establish in its new environment with different soil, temperature, watering airflow etc.

Once the rosemary has had one or more years to grow and mature it is far more likely to flower as it does not have to contend with the affects of transplant shock.

This may take some time and patience but the sight of blue flowers on rosemary and the aroma and taste of the leaves are all spectacular when the rosemary is healthy and thriving!