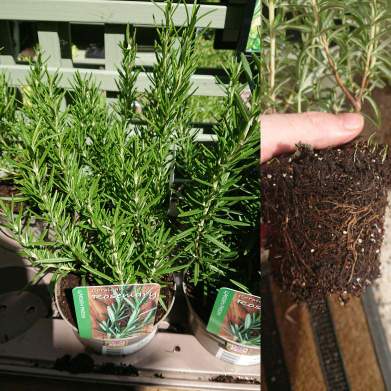 The reason rosemary turns brown is because of root rot and fungal disease. Rosemary is Mediterranean plant that prefers dry conditions. Persistently damp soils because of over watering, slow drainage or humidity, increase the risk of root rot which causes rosemary leaves and roots to turn brown.

Rosemary is a drought resistant plant that does not require much water. Rosemary turns brown (often with a wilting appearance) because of too much moisture around the roots rather then not enough.

The biggest risk factors for rosemary turning brown are:

Over Watering Causes Root Rot (Water Once Every two Weeks)

The most prevalent reason that rosemary leaves, roots and stems turn brown is because of over watering which results in root rot.

Consider that rosemary is a herb that is native to the Mediterranean region of Europe.

In this environment rosemary is commonly seen growing wild on rocky or sandy hill sides that drain very quickly after rainfall. Also, the climate has a dry heat with low humidity in full sun with infrequent rainfall.

Rosemary has specifically adapted to these conditions and thrive in a harsh, dry landscape. Therefore the roots do not like to be in damp soil for long periods of time.

It is often the case that gardeners over water rosemary which promotes the conditions that result in root rot and other fungal diseases.

If your rosemary plant is:

Then the plant is suffering from root rot due to over watering and possible slow draining soils. Root rot is likely to kill the rosemary if left untreated.

The solution is to scale back the watering as soon as there are any signs of the rosemary turning brown.

When you do water rosemary, always water with a generous soak to encourage the roots to establish which ensures its resistance to drought. Light watering encourages shallow root growth and results in an unhealthy plant.

If the rosemary has turned brown extensively then it can be difficult to save. However if there is only a few of the lower leaves turning brown then reducing watering can help the plant recover.

If the rosemary is in a pot or container I recommend transferring the plant to a new pot with a potting mix that is amended with sand or grit to improve drainage and allow the diseased roots a chance at recovery.

(Read my article how to water rosemary for how to establish the optimal watering schedule for your garden).

It is just as import to ensure that the soil drains quickly as it is to water rosemary appropriately in order to resolve rosemary that is turning brown.

Rosemary thrives in well draining sandy or rocky soils on hill sides that do not retain water very effectively.

The porous structure of sandy or stony soil allows for exceptional drainage which helps keeps the roots relatively dry and therefore prevents the root rot that causes rosemary to turn brown.

To grow rosemary successfully, it is important to recreate the soil conditions of its native environment in our gardens.

This is very easy to achieve, all it requires is either…

…both of which are available from garden centres and online. The horticultural sand has a bigger particle size then other types sand which increases the pore size in the soil to allow oxygen into the soil for root respiration and to allow rainfall or water to drain away quickly.

Efficient drainage will allow the roots to stay dry and free from disease which can turn the leaves brown.

If the rosemary is planted in clay soils, boggy or low lying areas of the garden or in rich compost that retains water then it is a good idea to transplant the rosemary to a pot with around 20% sand or grit and 80% potting soil or compost.

Pots have more favourable drainage conditions compared to most garden soils and can be a great way to grow rosemary if your soil is heavy clay.

Amending the soil with sand or grit will create the optimal growing conditions for rosemary and allow to roots to dry out and recover.

Whilst amending the soil and transferring the plant it is a good idea to take a look at the roots.

If any of the roots look unhealthy (dark coloured roots that are perhaps slimy as opposed healthier lighter coloured roots) it is a good idea to snip off the diseased roots, stems and leaves with a pair of sterilised pruners.

(To learn more about the causes of dying rosemary and for the solutions, read my article why is my rosemary dying?)

High rainfall can be problematic as it essentially mimics the same problems caused by over watering.

Rosemary is native to climates with lower rainfall but it can still be grown in temperate climates that have far more rainfall then the Mediterreanean.

The key with growing rosemary in climates with high rainfall is to amend the soil with lots of sand or grit when planting to ensure good drainage which will help to keep the roots dry.

In areas of high rainfall, pots and containers are more suitable for growing rosemary then planting in garden soil due to the improved drainage of pots.

If the rosemary is turning brown after significant spells of rain I recommend moving the pot under shelter for a few days until there is more sunny weather to allow the soil to dry out so the rosemary can recover.

If the rosemary is planted in garden soil then it may be necessary to transfer the rosemary to a pot with potting mix that is amended with sand or grit as fast drainage will help to mitigate the affects of persistent rain.

Humidity can be another reason why your rosemary plant turns brown.

Rosemary thrives in open spaces and tolerates a good breeze through the foliage which helps to keep the plant dry and reduce the chance of fungal disease which can turn the leaves brown.

If your rosemary is planted in a pot or container, consider the micro climate. Pots that are located in the corner of a patio or perhaps surrounded by other plants that are too close can create a more humid environment that the rosemary.

Keep pots and containers around 2-3 feet apart for larger rosemary plants. This space allows a greater chance for airflow around the leaves for a dryer environment.

I would also recommend to plant them at roughly 2-3 feet away from any other plants if you are growing rosemary in garden boarders.

This will also ensure that each rosemary has enough room for the roots to establish so that they do not have to compete with other plant for water, space or nutrients so that the rosemary can stay healthy and free from disease.

Rosemary is native to the Mediterranean with hot summers and mild winters. It is not a particularly cold hardy plant (hardy to USDA zones 9) and the newer growth in particular is vulnerable to frost damage.

For plants that have suffered frost damage, cut off any brown leaves with a pair of pruners which stimulates new growth and the plant should recover. However if there are any more cold snaps due, then I would recommend that you protect the rosemary plant.

If the rosemary is in a pot all you need to do is take the plant indoors for the evening, in perhaps the garage if there is space.

Alternatively if the rosemary is planted in garden soil, then sheltering the plant with fleece or a cloche is the best option to protect it from frost, which is surprisingly effective.

link to Why is My Rose Bush Drooping? (How to Save it)

Roses require the soil to be consistently moist, so the reason your rose is drooping is a likely a sign of drought stress due to underwatering, high temperatures or sandy soils that drain too...

Continue Reading
link to Why are My Herbs Turning Yellow? (How to Save Them)

Herb leaves turn yellow because of overwatering or underwatering which prevents the herbs roots transporting nutrients and water properly to the leaves which causes them to turn yellow and drop off....