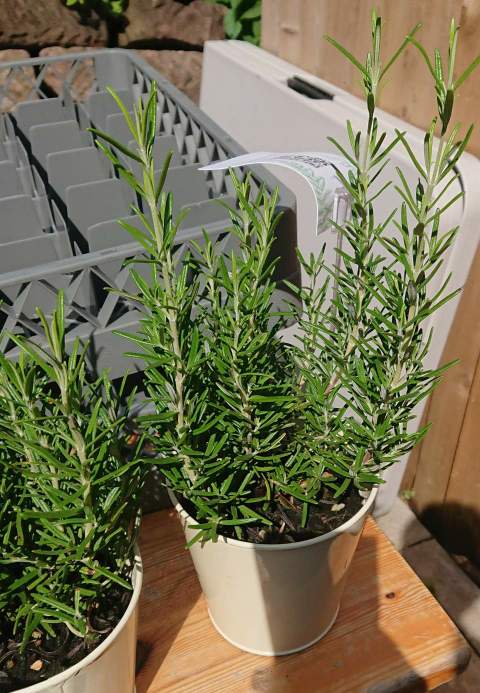 Whilst overwatering is the most common reason for potted rosemary plants dying, the correct potting soil is as important as an optimal water schedule, because if the rosemary’s roots are sat in potting soil that retains lots of moisture, then causes root rot even if you are watering your rosemary the appropriate amount…

Rosemary need potting soil that drains quickly, does not hold lots of moisture and has relatively low fertility to grow well and produce the best aroma. Aim for two-thirds compost and one-third horticultural sand to create the best potting mix for rosemary.

Keep reading to learn how to create the best potting mix, why you should avoid peat moss and how to avoid common mistakes when potting rosemary…

Rosemary is a herb that originates in the Mediterranean region of Southern Europe where it grows naturally on hillsides in Spain, Portugal and France.

On its hillside habitat, rosemary thrives in sandy or gritty soils that are relatively low in nutrients and drain very quickly, holding little moisture.

Hillsides naturally offer good drainage and the gritty, aerated, porous soils ensures that excess moisture does not sit in the soil around the roots as this promotes the conditions for root rot which is one of the most common problems that affects rosemary growers.

Soils that retain lots of moisture such as amended compost with wetting agents or clay soils increase the chance of fungal disease affecting your rosemary which can turn the leaves yellow, brown or black causing it to die back.

If rosemary is planted in soil that is rich in nutrients such as loam soil, compost with added fertilizers or soil that has been amended with manure (which is very high in nitrogen), then these soil conditions are contrary to the low fertility, gritty, sandy soil conditions that the rosemary has specifically adapted.

Nutrient rich soil causes rosemary to grow droopy, and more nitrogen in the soil reduces the concentration of essential oils in the leaves which are responsible for rosemary’s distinctive aroma and flavor. Therefore if you plant rosemary in fertile soil it will not taste or smell anywhere near as good nor display as many flowers.

Rosemary actually grows very well in pots and containers as pots have favorable drainage conditions which mimics the well draining conditions that naturally occur on hillsides.

How to Create the Perfect Potting Soil for Rosemary

Whilst you do not need a Mediterranean climate to grow rosemary, you can easily recreate the soil conditions.

To create the best soil for rosemary in pots it is important to emulate the sandy, gritty, medium to low fertility soil conditions in its native Mediterranean environment.

This can be achieved by amending ordinary multipurpose compost with coarse horticultural sand or grit.

The horticultural sand and grit effectively mimics the inorganic portion of rosemary’s natural soil which is very sandy and stony ensuring excellent drainage and a porous structure creating space for oxygen in the soil which is important for root respiration and preventing any soil compaction which can slow drainage.

Too much sand or grit is always better then not enough as the sand very effectively mitigates the risk of root rot which is the more common reason for a dying rosemary plant.

If you live in a climate of higher rainfall (such as the Pacific North West or Northern Europe) then I recommend adding a higher portion of sand or grit to the soil.

Rosemary has specifically adapted to tolerate drought conditions and dry soils, so it is important to emphasize how much rosemary requires the soil to be well draining.

Adding more sand or grit to the mix helps to counter the affect of high rainfall climates and your rosemary should grow very well once it is growing in its preferred well draining conditions.

I have spoken to commercial lavender, rosemary and Mediterranean herb growers in Washington and Oregon who recommend amending their potting soil with as much as 50% horticultural sand or grit to 50% multipurpose compost to provide the optimal balance of drainage to grow rosemary successfully despite a rainy climate and conditions.

The sand and grit also play another important role in that they help to create the right level of soil fertility for rosemary.

As surprising as it may sound rosemary thrives with lower fertility soils and produces the best aroma and flavor from the leaves as well as the most flowers.

Sand and grit do not contribute much nutrients to the soil which helps to balance out the fertility of the compost for your potting soil to mimic the same of level of soil fertility as their Mediterranean range to ensure your rosemary has the best aroma and flavor.

The rosemary can attain all the nutrients they require from the gritty, compost mix.

It is important to note that you cannot substitute horticultural sand with ordinary beach sand in your rosemary potting mix.

Horticultural sand is coarse and has a larger particle size then ordinary beach sand which the grains is much more fine.

Beach sand particles can be very small and actually create a soil mix that drains too slowly as well as exclude oxygen with a less porous structure.

Horticultural sand, grit or perlite is usually available for a good price in garden centers or on amazon.

The reason to avoid peat moss is because peat bakes hard in full sun (rosemary requires full sun) and becomes hydrophobic when it dries which means it repels water from the surface of the potting soil. This can then cause water to run off the surface of the soil and down the side of the pot without actually infiltrating and reaching the roots.

Rosemary is a drought resistant plant but if water is being deflected off the surface of the soil then the roots cannot draw up any moisture and the rosemary can die back.

Always prioritize a peat free compost or potting soil when creating your potting mix for rosemary which should be labelled clearly on the packaging.

Aside from peat content you should also not pot rosemary in any compost that has wetting agents or added fertilizer as both of these characteristics are in contrast to rosemary’s preferred soil conditions.

Ordinary multi-purpose compost amended with sand or grit is the optimal potting mix for rosemary.

(It is important to know when to water potted rosemary to compliment well draining soil to maintain the optimal balance for moisture for potted rosemary so read my article, how to water rosemary for all the best practices of watering).

Rosemary is native to regions with calcareous soils which are typically alkaline in pH and the preferred pH range for rosemary is pH 6-7.5 (which is slightly acidic, neutral and slightly alkaline) but some rosemary varieties are capable of tolerating pH 4.3-8.3.

All standard commercially available potting soils and compost fall within the ideal pH 6-7.5 range with only soils that are labelled as ericaceous should be avoid as this means it is has been formulated for plants such as camellias which prefer higher levels of acidity.

There is not need to amend the soil with lime or any other material that raises the pH to alkaline. Whilst it may not hurt the rosemary it could potentially harm it if you add too much.