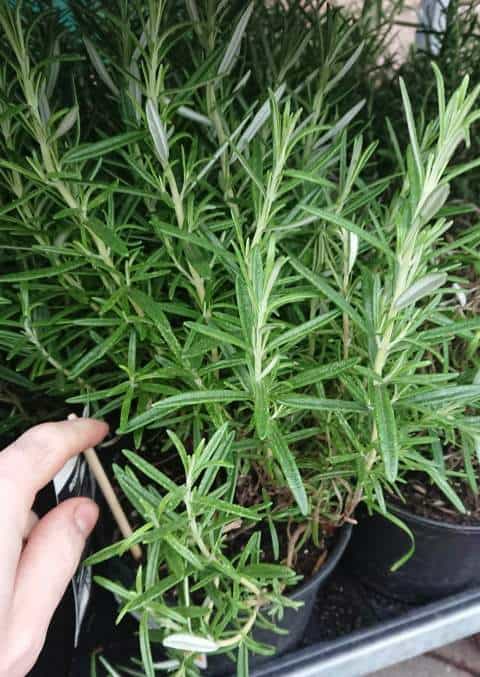 The reason rosemary leaves turn black is because of fungal disease which is caused by damp soil around the roots or high humidity. Root rot, Botrytis, black spot and other fungal pathogens can all cause rosemary to turn black.

Rosemary is native to the Mediterranean where it grows in sandy or stoney soils that drain quickly and thrive in full sun with infrequent rainfall or watering.

The conditions that turn your rosemary black are often caused by over watering,slow draining soils, high rainfall, high humidity and overhead watering as this will promote the conditions for the fungal pathogens that cause rosemary to turn black to thrive.

Rosemary prefers the roots to dry out between bouts of watering and arid conditions. to prevent and treat rosemary leaves and stems turning black it is important to replicate some of the conditions of the rosemary native environment.

Keep reading for why your rosemary is turning black, the best practices for preventing the problems and how to solve it…

The fungal disease pathogens that affect rosemary are encouraged by damp soils.

The aroma and flavour of rosemary is at its strongest in the years with infrequent rainfall, blazing sun and growing soils that are relatively poor in nutrients.

Therefore rosemary does not require much water to thrive. Most gardeners over water rosemary which promotes the conditions for fungal diseases that can cause root rot or turn the foliage of the rosemary black.

In most climates, established rosemary does not require any additional water, particularly in temperate climates with significant rainfall

By scaling back the water the roots will have a chance to dry out which will help to combat the fungal diseases and root rot.

Always water rosemary at the base of the plant rather then overhead, onto the foliage. Persistently damp foliage can mimic humid conditions which will encourage mildew (mildew is usually gray) and leaf spot, both of which can turn the foliage back.

The spores of fungus are spread by water so it is always best practice to water at the base of the plant rather then sprinkle water over the leaves.

Rosemary can cope with damp foliage after rainfall if it is in a hot climate, in full sun where the rate of evaporation is increased.

In cooler more temperate climates the water can remain on the leaves for longer, (particularly on overcast or cooler days) which exacerbates the risk of fungus.

Water the rosemary at the base so that the water reaches the roots where it is required rather then sits on the foliage creating a favorable atmosphere for fungus that can turn the foliage black.

(Read my article how to water rosemary to establish the optimal watering schedule for your garden).

Rosemary has adapted to growing in well draining sandy or stony soils, often on hillsides in Mediterranean countries such as France and Italy, therefore the roots are accustomed to dry, well draining soils.

When rosemary is planted in the garden a common mistake is to plant it in moisture retentive soils such as rich compost or in clay soils which drain slowly.

Moisture around the roots due to slow draining soils are the optimal conditions for the fungal pathogens to thrive which causes rosemary to turn black.

In order to grow rosemary successfully and prevent or treat rosemary with black foliage, it is important to replicate the well draining soil conditions of the Mediterranean.

Whenever your planting rosemary whether it is in a pot or in a garden boarder, amend the soil with horticultural sand or grit before planting.

This will help to improve the drainage drastically by increase the porosity of the soil and balance the soils characteristics so that it does not hold moisture that can harm the roots and contribute to the conditions for the fungus that turns rosemary black.

When digging a hole for your rosemary or preparing pots and containers, add approximately 20% sand or grit to the area and 80% multi purpose compost.

In climates of high rainfall I would recommend adding an even higher proportion of sand or grit to ensure that the soil is able to drain quickly so that the roots can stay on the dry side and remain healthy.

If your garden soil is boggy or has a higher content of clay then I recommend growing or transplanting rosemary to a pot or container.

Pots and containers are a great way to grow rosemary as pots have far more favourable drainage and you can have control over the soil profile rather then trying to amend soil that is not suitable.

Growing rosemary in pots also means that you can move the pot to shelter if there is a time of high rainfall if the rosemary shows signs of turning black.

Watch this YouTube video for how to transplant rosemary so you can move the plant safely from an area of slow draining soil.

Humidity Encourages the Spread of Fungus that Cause Black Spot

Like a lot of Mediterreanean herbs, rosemary prefers to grow in full sun in a dry area with low humidity.

Planting rosemary too close together, surrounded by other plants or in an area with little airflow (in the corner of a patio for example) then a micro climate can occur which increases the relative humidity of the area.

If the conditions are too humid without any airflow then this can particularly increase the risk of:

Humidity can also indirectly contribute to an increase in the risk of root rot all of which can turn the rosemary leaves, and stems black.

How to Treat Fungus and Black Spot on Rosemary Leaves

Rosemary is generally a robust plant that is resistant to disease so if the problem is black spot or mildew the plant can usually recover with the right care.

Spray the rosemary with an organic fungicide to ensure the fungal spores have not spread around the foliage.

Here is a great YouTube video for how to mix your own organic fungicide:

If the rosemary is turning black in a pot or container then ensure then pot has suitable drainage holes and that you do not catch the excess water in a drip tray as this causes the soil to become water logged and results in the root rot that can cause the rosemary to turn black.

Add some grit to the bottom of the pot to ensure that the drainage holes are not blocked by compacted soil.

Choose a pot that is 16 inches across to ensure the pot has the capacity for enough soil so that the roots are insulated in Winter and the rosemary does not become pot bound which can turn the rosemary leaves yellow and cause rosemary to die back.

If the rosemary is increasingly turning black then the only way to save it is by snipping the infected roots and foliage growth in an attempt to stop the spread, however rosemary does often die once root rot or Botrytis blight has infected the plant.

By cutting away the diseased parts of the plant you will give the rosemary a chance at recovery, although it is often easier to just buy a new rosemary and throw out the potting soil and plant as it can contain the fungus.