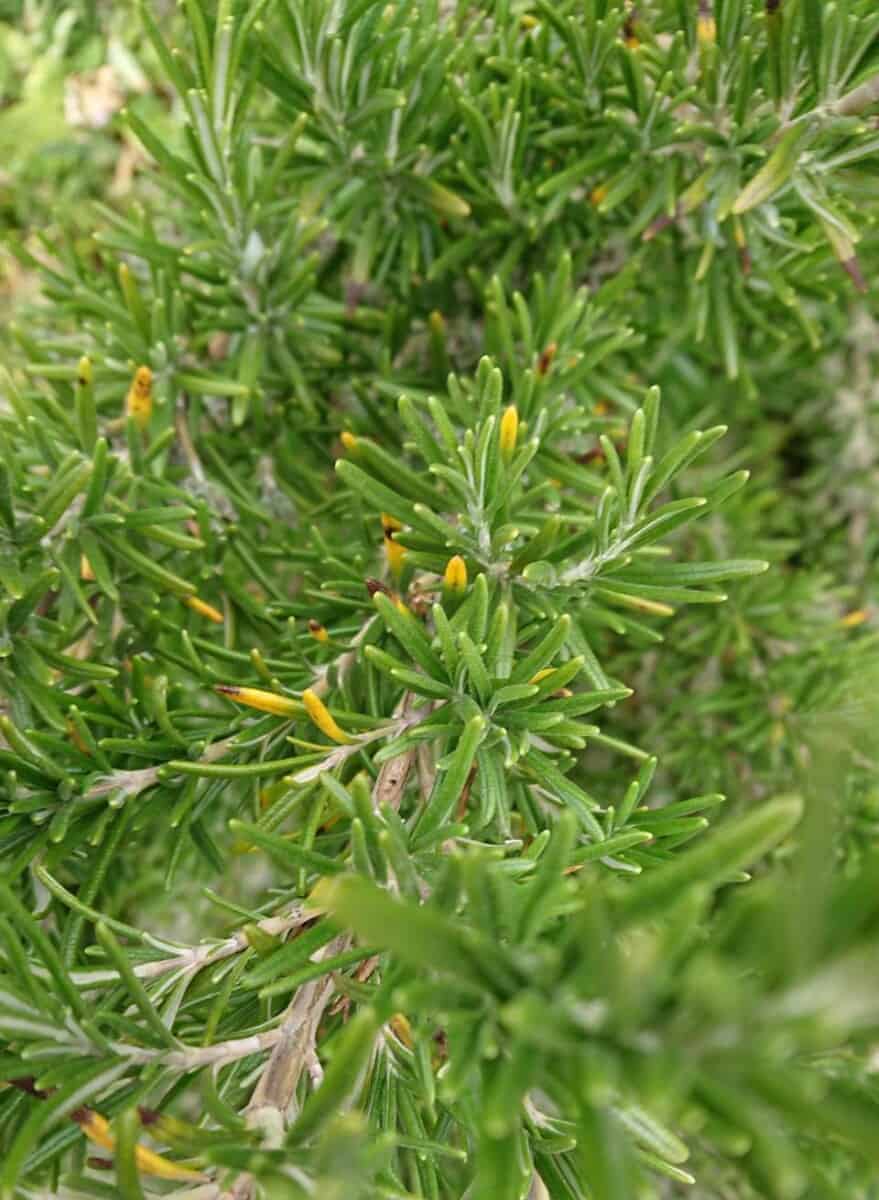 Rosemary is a drought resistant plant that thrives in poor, well draining soils and full sun, so the reason rosemary leaves are turning yellow is because of excess nitrogen in the soil or as a sign of stress, due to damp soils as a result of over watering or slow draining soils.

The leaves of potted rosemary plants can also turn yellow if the pot is too small or the root are pot bound.

Rosemary grows in the Mediterranean region of Europe in soils that range from acidic to alkaline with an optimal pH of between 6 – 7.5, therefore chlorosis due to alkaline soils is not likely to be the cause of rosemary leaves turning yellow which is often the case for plants that only tolerate acidic or neutral soil conditions such as roses.

One of the common reasons for rosemary leaves to turn yellow is because they are planted in rich soil that may have been amended with manure (which is high in Nitrogen) or because of the use of too much fertilizer.

Rosemary plants are native to the Mediterranean region of Europe where they thrive in relatively nutrient poor, sandy or stony soils.

Rosemary has specifically adapted to this soil type and it is under these conditions, that rosemary produces the strongest aromas and the most flavourful leaves for culinary purposes.

Therefore more problems that result in the leaves turning yellow tend to occur because of excess nitrogen rather then a deficit.

Rosemary is a versatile plant that can live in several soil types as long as they are well draining (loam, sandy, chalky soils) but if the soil is too rich in nitrogen or you have used a high nitrogen fertilizer then the rosemary leaves can turn yellow as a sign of stress.

Other signs of nitrogen stress include:

In fact studies show that rosemary planted with more sand, stone or perlite with lower rates of fertilizer produced more oils in the leaves (then those planted in richer soil with more fertilizer) which increases the flavour and aroma of the plant.

The key to healthy rosemary is to replicate the natural growing conditions in your garden to which they are adapted.

This means planting them in a sandy soil mix which does not hold as much or water or retain as much nutrients (around 20% sand or grit to 80% potting soil or compost) will recreate their native soil type and allow for good drainage whilst creating the low to medium nutrient environment in which rosemary thrives.

If you have planted Rosemary in a large enough pot (smaller pots have less capacity for soil and therefore the roots have less access to nutrients), it will likely attain all the nutrients it requires without additional fertilizer.

A well balanced weak fertilizer applied once per year in the Spring is all a rosemary would require but even then it is unlikely to be necessary in the same way it is for growing plants such as Roses or Hostas which are heavy feeders and require consistent feeding.

Rosemary is a drought resistant plant once established and tends to suffer when it is watered too frequently, in areas of high humidity or if the roots are in soils that drain slowly, all of which can contribute to the leaves turning yellow…

One of the most common causes of Rosemary plants turns yellow is because of over watering.

Rosemary originates in the Mediterranean region of Europe where it is adapted to full sun, well draining, often sandy or stony soils with infrequent rainfall.

The thin, almost needle like leaves of rosemary are shaped in a way to keep transpiration (water loss) from the leaves to a minimum.

Rosemary is suited to dry soils in arid climates, therefore when it is cultivated by gardeners it is often over watered and the leaves can turn yellow as a sign of stress.

Rosemary prefers the soil dry out around the roots between each bout of watering.

If the soil or compost in a pot is consistently damp then this is contrary to their preferred dryer conditions and the leaves can turn yellow or perhaps brown.

It is possible that the rosemary is infrequently watered and yet the leaves still turn yellow because the soil is slow draining or boggy which has the same affect as over watering.

The rosemary that grows natively in France is often in sandy soil or on hill sides where the soil drains quickly and does not hold onto moisture efficiently.

If your rosemary is planted in:

…then the Rosemary can suffer from water sensitivity that turns the leaves yellow.

Another concern is if your Rosemary is planted in a pot or container that does not have drainage holes in the base, so the excess water does not escape and the soil remain damp, which risks yellow leaves and root rot.

A humid environment is another potential problem that can contribute to rosemary leaves turning yellow due to moisture stress.

Rosemary occurs naturally by the coastal regions of Southern Europe where there is a consistent breeze through the foliage. If the air is still and perhaps humid then the rosemary leaves may turn yellow or brown as a sign of stress.

This is also another risk factor for root rot and fungal disease. Rosemary prefers open areas with an occasional breeze, so if the pot is stuck in the corner of a patio or in a more humid micro climate amongst other vegetation it may suffer as as result.

How to Resolve Yellow Rosemary due to Water Sensitivity

The key to treating Rosemary that is turning yellow because of too much moisture is to:

Once Rosemary is established in an area of your garden, it is drought resistant (thanks to its Mediterranean heritage) and it only requires watering once every 2 weeks with a generous soak.

Always water Rosemary with a generous soak as this encourages the roots to establish properly and ensures the plants resilience to drought conditions.

Let the Rosemary dry out for 2 weeks and then water consistently once every 2 weeks from Spring to the late Fall, and if over watering is the problem the roots and leaves should have a chance to recover and turn a healthier green rather then yellow.

If the soil is slow draining then I would recommend that you amend the soil with horticultural sand or grit. This will increase the drainage of the soil so that the roots do not sit in consistently damp soil.

For potted rosemary I recommend that you plant, in a soil mix that is roughly 20% sand or grit to 80% compost as this replicates the soil conditions of the Mediterranean where rosemary thrives.

If the rosemary is planted in heavy clay soil or a boggy area then you should transplant the rosemary to a dryer area and amend the soil with sand or grit for improved drainage or perhaps a transfer the Rosemary to a pot.

Here is a helpful YouTube video for how to dig up and transplant a rosemary plant whilst mitigating any transplant shock:

Pots and containers are another great way to improve airflow around the foliage as pots tend to have more favorable drainage conditions and allow air to circulate more efficiently around the rosemary when compared to planting in garden soil.

Yellow Leaves Due to Lack of Sun

Rosemary is a plant that lives naturally in blazing sunshine (in the South of Europe) for most of the year with few overcast days and mild Winters.

If your Rosemary is not in full sun then it can grow sparse and perhaps leggy growth with fewer flowers. The leaves can also turn yellow as symptom of poor plant health.

This is of course very easy to fix, by simply either moving the potted rosemary in to a location with full sun or transplanting the rosemary to a more sunny area if it is planted in the garden soil.

Within a few weeks the plant should begin to recover with better growth, stronger fragrance and potentially more flowers, not to mention the leaves turning from yellow to a healthier green.

Pot size is very important when it comes to growing healthy rosemary. If the pot is too small then the roots will have limited space to access the nutrients and water it requires which can turn the leaves yellow.

Plant rosemary in a pot that is roughly 12-16 inches across (or more) to ensure that the pot has enough capacity for soil so the roots can establish properly without becoming pot bound and unhealthy.

If the pot is too small then the soil can dry out very quickly in full sun before the roots have a chance to uptake the water, too quickly, even for rosemary which prefers dyer soil conditions.

For a lot of plants that thrive in acidic soils (roses, azaleas, rhododendrons etc.) the reason their leaves turn yellow is because of chlorosis which is ultimately caused by the soil being too alkaline and therefore the plant has trouble absorbing the nutrients it requires.

In these cases the leaves turn yellow but the veins of the leaves remain green.

This is not the case for Rosemary!!

I have seen gardeners jump to the conclusion that the soil is too alkline or low in iron so they add iron chelates and amend the soil so that it is more acidic.

Rosemary grows naturally in calcareous soils in the Mediterranean countries and is suited to growing in alkaline soils (as well as mildly acidic soils) therefore the leaves are unlikely to turn yellow due to chlorosis as rosemary can tolerate a pH range of 4.5 to 8.3 but the optimal range for growing healthy rosemary is pH 6 (mildly acidic) to pH 7.5 (slightly alkaline).

Most garden soil is around pH 6-7 as this is the pH of most organic matter once it is fully decomposed so soil pH is very unlikely to be causing your rosemary leaves to turn yellow unless the soil is excessively acidic or alkaline in which case there would be very few healthy plants that would be able to grow in your garden and it is far more likely that the leaves are yellow due to water stress or an excess of nitrogen.