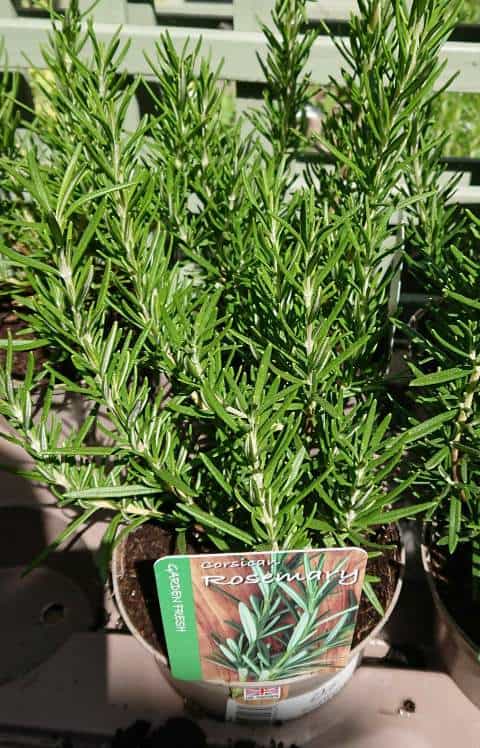 Rosemary is a Mediterranean herb that grows naturally in well draining soils, in full sun and with infrequent rainfall. To grow rosemary successfully in pots and containers, it is important to try and emulate these conditions.

Plant rosemary in pots with a well draining potting mix of 30% grit and 70% compost. Grow rosemary in clay or terracotta pots 12 inches across in full sun and water rosemary every 2 weeks with a thorough watering, so excess water trickles out the base of the pot.

Reference table for how to grow and care for rosemary:

Keep reading to learn how to grow and care for rosemary in pots and containers, so that they produce leaves with the strongest fragrance and best taste, and to ensure the best practices of care so that the potted rosemary survives Winter…

Best Pots and Containers for Rosemary

Rosemary plants are Mediterranean herbs and grow in well draining gritty soil that does not hold moisture around the roots.

Whilst you do not need to be in Mediterranean climate to grow rosemary it is important to emulate some of the conditions by ensuring the soil can dry out evenly.

Choose a clay or terracotta pot for growing rosemary as the material is porous which allows the soil to dry evenly rather then plastic pots which can retain too much moisture and risk root rot.

The most important characteristic of any rosemary pot or container is that it has drainage holes in the base to allow excess water to escape after watering to allow the soil to dry between bouts of watering which mimics the conditions of the rosemary’s native environment.

It is best practice to prop your rosemary pot on feet or stones to elevate the pot off the ground to ensure water can drain freely from the bottom of the pot after watering.

Planting Rosemary in Pots and Containers

Rosemary is a Mediterranean herb that has adapted to growing in gritty well draining soils on mountainsides in countries such as Spain.

Therefore to grow rosemary in pots and containers, it is important to emulate these seemingly harsh Mediterranean soil conditions for the rosemary to produce leaves with the strongest flavor and aroma.

Rosemary can grow in a wide range of soils but pH 6.5-7 is optimal which is well within the typical range of most multipurpose compost and potting soils.

The most important soil characteristic for rosemary is good drainage, so add approximately 30% horticultural sand or grit (by volume of the pot) and 70% multipurpose compost to emulate the soil drainage of the rosemary’s native Mediterranean hillside environment and ensure that moisture drains efficient away from the roots after watering to avoid root rot.

If you live in a climate of high rainfall, then I recommend being more generous with the sand and grit to counter the affects of all the rainfall and ensure the optimal balance of moisture for rosemary to thrive.

Too much grit is always better then not enough to ensure as good drainage is essential.

The most common reason for rosemary dying is because of root rot which is easily avoided by planting rosemary in pots with good drainage and watering the with the right frequency.

Before planting your rosemary in the pot, I recommend adding a 1 inch layer of gravel to the bottom of the pot or container which prevents the drainage holes becoming blocked by compacted soil and ensures good drainage.

Water rosemary in pots and containers with a generous soak, so that excess water trickles out the base of the pot. Overwatering is the most common reason rosemary plants die so wait until the top 4 inches of the soil dry before watering again.

Watering rosemary thoroughly encourages the roots to grow deeper and properly establish in the potting mix which further increases the rosemary’s resistance to drought.

If you water too lightly, then only the top inch or so of the soil becomes moist which causes the roots to grow near the surface of the potting soil and reduces the growth and resilience of the rosemary.

It is best practice to place your potted and container rosemary on feet to elevate the pot an inch off the ground.

This ensures that water can drain freely from the drainage hole in the base of the pot without pooling underneath the pot which would promote the conditions for root rot.

How Often to Water Rosemary in Pots

Rosemary is a drought resistant herb that thrives in well draining potting soils and requires watering less frequently then most plants.

Water potted and container rosemary once a week in the hottest and driest weeks of Summer if there has been no rainfall. In cooler climates with overcast weather water rosemary every 2 weeks. Always wait until the soil feels somewhat dry before watering again.

In climates with mild Winters in which you can keep potted rosemary outdoors then the rosemary does not require any additionally watering in the Fall and Winter as it is in dormant state and can attain the require moisture from the environment.

Rosemary requires watering significantly less frequently as the plant is in a dormant state and their is a higher risk of root rot in the Winter.

Watering once every 4-6 weeks strikes the balance of ensuring the rosemary has enough moisture to survive but does not risk root rot.

(Read my article, how often to water rosemary).

Rosemary is not cold hardy so bring pots indoors in climates with freezing Winter temperatures or use horticultural fleece to protect rosemary against frost. Locate potted rosemary in as much sun as possible and water every 4-6 weeks to prevent the rosemary from drying out completely.

Rosemary is a Mediterranean herb that has adapted to living in climates with mild Winters that do not experience frost and is cold hardy to USDA zone 6.

Some rosemary varieties can tolerate light frost but if you want to ensure their survival over Winter, either use horticultural fleece to insulate the rosemary at night or bring the pot indoors a place it in a sunny window.

In colder climates the importance of well draining soil and larger pots increases. A larger pot has the capacity for more soil which acts as insulation for the cold sensitive roots.

Rosemary is at greatest risk of root rot in Winter as cold temperatures typically means damp spoils that stay moist for a long time (which promote the conditions for root rot and fungal diseases to thrive).

If you live in a colder climate with more rainfall then it is imperative to use lots of grit in the potting mix to increase aeration of the soil and to improve the drainage.

Grit does not hold onto moisture in the same way that organic material does so it is the perfect soil amendment for growing rosemary and countering damp conditions in Winter.

Where to Grow Rosemary in Pots and Containers

Rosemary grows most often on hillsides in its native Mediterranean environment and enjoys full sun.

Locate your potted rosemary in an area of your garden with full sun (at least 6 hours) with some air flow around the foliage. The more sunlight the higher the concentration of essential oils in the rosemary’s leaves increasing its aroma and flavor.

Rosemary is grown commercially in hot and dry countries around the Mediterranean in blazing sunshine with warm temperatures and an occasional breeze and it is in these conditions in which rosemary thrives.

Rosemary tends to grow leggy in the shade and the leaves do not smell as strong, flower or have the same culinary value without several hours of direct sunlight.

Try to avoid placing your potted rosemary in a a corner or anywhere without an occasional breeze as some airflow helps to dry the foliage after rainfall, overhead watering and reduces humidity which prevents fungal disease.

(Read my articles, why is my rosemary turning brown, yellow or black).

How and When to Prune Rosemary– Pots and Container Care

Prune rosemary anytime in Spring after the threat of frost has passed and anytime in Summer. Avoid pruning in the Fall as this stimulates new growth which is more vulnerable to frost damage.

Pruning your rosemary is a good idea to stimulate new growth and encourage a bushier more productive rounded plant.

Pruning is very simple, all you have to do is cut off the top third or the top 3 or 4 inches of growth with a sharp pair of pruners, and this encourages the newer growth which hosts the leaves with the higher concentration of essentials that are responsible for the aroma and taste of the rosemary.

You can prune your rosemary as and when you require it for cooking as long as you prune in the Spring or Summer. If you want to enjoy the taste of rosemary all year round, try cutting it in Summer and freezing it as rosemary retains is flavor when defrosted for cooking.