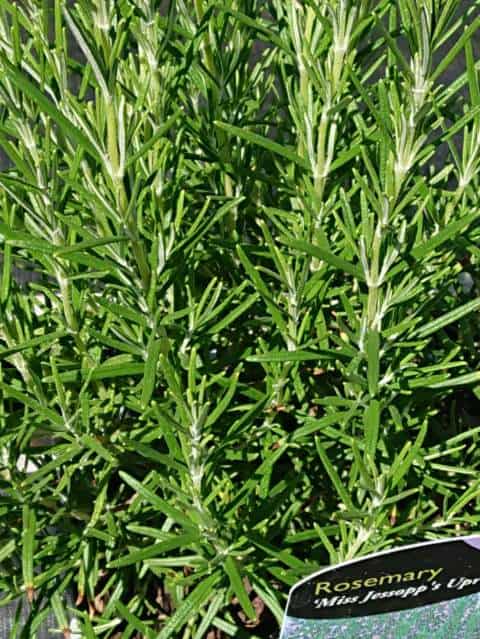 Rosemary is a Mediterranean plant that has specifically adapted to certain climate and soil conditions of its native environment.

So the reason your rosemary is not growing is usually as sign the rosemary is stressed as it is planted in conditions that are contrary to their growing preferences such as, not enough sun, too much moisture around the roots or pot bound roots that are restricting nutrient uptake.

It is important to note that rosemary grows natively on hillsides in Southern France by the coast, where the soil is sand or stony with low to medium nutrients.

It is under these conditions that rosemary actually grows best so applying additional fertilizer is often not the solution for rosemary that is not growing and there several factors that can cause rosemary not to grow as much as it should.

One of the most common reasons for potted or container rosemary to not grow despite the Spring and Summer weather is due to the roots becoming pot pound as the container is too small.

Rosemary does not like to be pot bound for a number of reasons:

Always plant rosemary in a relatively large pot (around 16 inches across) and protect it from Winter (bring the pot indoors overnight if the temperatures are below freezing or use fleece or a cloche to provide outdoor protection).

Planting rosemary in a larger pot will solve the majority of problems and allow the plant to grow again, with stronger smelling foliage and more flavourful leaves.

The increased pot size allows for more soil to insulate the roots so the rosemary is less vulnerable to unexpected cold snaps. With more soil, the rosemary can access more nutrients and water which will restore the plants health so that it grows more and remains healthy.

When is fertilizer appropriate for encouraging a rosemary to grow?

Rosemary grows in sandy or stony soils in its native Mediterranean range which are relatively low in nutrients. Rosemary has adapted specifically to these low nutrient soils and actually thrives in this environment, so long as the roots have enough space to establish.

As rosemary prefers low to medium nutrient soil, often a fertilizer is not necessary but it can be useful if:

In these two situations a small application of a balanced NPK (Nitrogen, Phosphorous and Potassium) liquid fertilizer at half strength can be useful to help stimulate growth after a period of low nutrients.

Any general fertilizer is suitable but I must emphasise the need to apply at half strength as too much fertilizer can do more harm then good for rosemary.

One of the most common reasons for rosemary not growing as well as it should is because the plant is not located in full sun.

Rosemary is native to countries in Southern Europe and it is particularly prevalent in the South of France. In its native environment rosemary is located in full sun with high temperatures and mild Winters in an open area where it is not shaded by other plants.

It is in these climate conditions that rosemary grows best, with the strongest aroma, flavours and it can even flower practically all year round.

Rosemary is an adaptable, hardy plant that can thrive in a variety of different climates (apart for consistently cold climates) and can grow well with at least 6 hours of sun per day, but with preferable more.

The less sunny the location, the less the rosemary can grow, so if you have planted rosemary or located the pot in an area with less then 6 hours of sunlight then you should either transplant the rosemary of move the pot to a sunnier location.

This will encourage better growth and increase the aroma and flavour of the leaves.

Watch this YouTube video for how to transplant rosemary:

Rosemary is a drought resistant plant that thrives in harsh, dry conditions. Rosemary is adapted to living in sandy or stony soils that do not retain much water so the roots are often relatively dry which is their preferred state.

A common mistake for gardeners growing rosemary is to care for it too much! Rosemary actually thrives on rather neglectful treatment and grows much better with less care and attention.

Rosemary can show signs of stress due to:

Rosemary can grow very well in rainy areas (such as the pacific north west or the UK) if the soil has been amended so that it is well draining.

Stress because of moisture sensitivity can prevent rosemary from growing so it is important to replicate the soil conditions of the rosemary native environment.

(Persistently damp soils can also cause the rosemary to turn yellow, brown or black depending on the fungal pathogen. Read my article on how to revive a dying rosemary plant).

First and foremost it is important to restrict watering to periods of hot weather and skip watering if there has been many rainy or overcast days.

Rosemary generally only requires watering once every 2 weeks in the Summer if they are planted in the appropriate pots and once every 2 or 3 weeks if planted in garden boarders.

To ensure that the soil does not stay moist around the roots persistently it is a good idea to amend the soil before planting, whether the rosemary is potted or planted in garden soil.

Once you have dug the hole or chosen a pot, add roughly 20% horticultural sand or grit to 80% multi purpose compost or potting soil.

This replicates the soil conditions of the rosemarys native environment and ensures that there is good drainage so the roots are not in damp soil which can stress the plant and prevent it from growing properly.

Persistently damp soil can limit the growth of rosemary and potentially cause root rot and promote the conditions in which fungal diseases thrive hence the importance of well prepared soil.

Rosemary really responds well to pruning throughout the growing season which stimulates growth of new stems and leaves which means you can prune rosemary for cooking as and when it is required to keep the flavour at its strongest.

If the rosemary is not pruned regularly then there can be significant woody growth from the base. The woody stems and branches are slower growing and tend to be less productive then the newer stems in terms of growth of new stems and leaves.

Avoid hedging rosemary to encourage more leaves and do not cutback into the woody growth as this will not grow back so well.

Pruning rosemary in the Spring is a great time to tidy up the appearance of the plant and stimulate growth. Do not prune too late in the Fall as this can stimulate new tender growth that is more vulnerable to damage from frost.

Watch this YouTube video for how to prune rosemary to encourage more growth and more leaves: