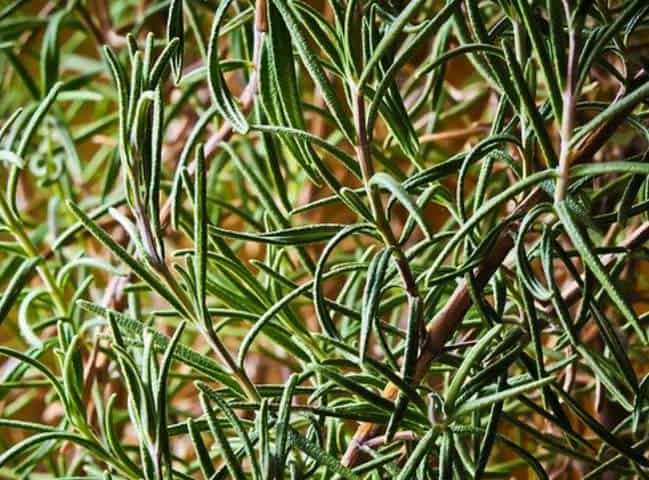 Rosemary is a drought tolerant plant so the reason your rosemary is drooping is likely a sign of stress due to over watering or slow draining soils rather then under watering. Rosemary can also have a drooping appearance because of transplant shock or high nitrogen soils.

Potted rosemary can droop due to lack of water if it is planted in pots or containers that are too small and therefore do not have the capacity for enough soil so that the roots can not draw up moisture before the soil dries out.

One of the most common reasons for rosemary to droop after planting is because of transplant shock.

This can be due to the contrast in humidity, watering, heat, sun, soil conditions or other factors which may cause rosemary to droop as a sign of stress due to a change of environment.

The best way to deal with drooping rosemary caused by transplant shock is to provide the optimal conditions for rosemary to grow which means emulating the growing conditions of the rosemarys native environment in the Mediterranean region of Europe.

This means that you should plant rosemary in:

Rosemary is a drought resistant plant once the roots have established but it is more vulnerable after planting which is why it requires more care and attention to avoid drooping.

Ideally you should plant the rosemary in the Spring as this will give the rosemarys roots a chance to establish in the new soil conditions and access water before it has to contend with blazing sunshine in the Summer.

If you have planted rosemary in summer then careful watering is required whilst the root system establishes to the new environment to avoid the plant from drooping.

Water newly planted rosemary around twice per week for the first month after planting. This will help to strike the balance between watering enough so the plant has enough moisture but not watering too much which can also cause the rosemary to droop due to moisture sensitivity.

Potted rosemary requires more watering then rosemary planted in the ground to mitigate transplant shock and prevent a drooping appearance due to the pots more favourable drainage conditions, so water as frequently as 3 times per week for the first month after planting if the weather is hot and dry.

After a month you can scale back the watering to once every week with a good soak each time which encourages the roots to establish and increases the plants tolerance to drought.

If you successfully replicate some of the growing conditions of the rosemarys native Mediterranean environment then the rosemary will have the best chance of recovering from any transplant shock that may cause it to droop.

Watch this video for how to transplant rosemary:

Too much Nitrogen Causes Rosemary to Droop

Rosemary with a drooping appearance is often as a result of strong concentration of nitrogen in the soil.

All plants require nitrogen for growth however too much nitrogen can cause more harm then good when growing rosemary.

Rosemary thrives in its natural environment on hill sides with well draining sandy or stony soil (which do not retain much water or nutrients) and it has specifically adapted to growing in these low to medium nutrient soils.

So when rosemary is planted in very rich compost (particularly if the planting area has been amended with manure which is high in nitrogen) it can droop as a sign of stress.

Rosemary drooping is particularly common if you have applied a fertilizer to the plant which has a strong concentration of nitrogen.

The symtoms of a rosemary that is growing in nitrogen rich soil (or with additional fertilizer) are:

Rosemary rarely requires a fertilizer due to its preference for low to medium nutrients soils, however a half strength general NPK fertilizer applied in Spring can help stimulate growth for rosemary that is planted in a pot for years and has exhausted the nutrients of the soil.

The best way to deal with a rosemary with a drooping appearance is to stop applications of fertilizer. The rosemary will eventually recover as it thrives on neglectful treatment rather then too much care.

However it is a good idea to ensure the rosemary is in full sun and has good airflow around the foliage as well as good soil drainage. This will help mitigate the risk of disease, which it is more susceptible to when there is an excess of nitrogen in the soil.

In terms of rich soil, I would recommend to stop amending the area around your rosemary with manure or any other mulch as this retains too much water and can add too much nitrogen to the soil.

Rosemary is a hardy plant when established so it should recover from a drooping appearance and return to normal if the growing conditions are suitable.

If you plan to transplant the rosemary then this would be an good time to amend the soil of the new planting area with sand or grit to help replicate the growing conditions of the rosemarys natural environment.

Sand and grit do not retain much water or contribute much nutrients to the soil which will help balance overly rich soils so they are more appropriate for growing rosemary.

Damp Soils Cause Rosemary to Droop

Another reason for rosemary to droop is because of over watering, slow draining soils or persistent rainfall, all of which result in too much water around the roots which causes the rosemary to be stressed and droop.

Rosemary grows naturally on hill sides in well draining sandy soils. In Southern France (where rosemary is most prevalent), the climate is hot and sunny with a dry heat and infrequent rainfall with mild winters all of which results in the rosemary growing in soils which allow the roots to be dry between bouts of watering or rainfall.

Too much water around the roots of rosemary causes the plant to droop in appearance as a sign of stress. Damp soils not only cause a drooping rosemary but also encourage the prevalence of fungal diseases and root rot.

If your rosemary foliage is also turning brown, black or yellow then this may be because of fungal disease. (Read my article on how to revive a dying rosemary plant).

In terms of high rainfall, rosemary can grow in rainy climates such as the pacific northwest or the UK as long as the soil has been amended with sand or grit before planting to improve the drainage.

If you are just planting or transplanting rosemary then I recommend amending the soil so that the pot or hole in the soil is at least 20% sand or grit to 80% compost or potting soil.

Too much sand or grit is always better then not enough as slow draining soils will cause the rosemary to droop whereas well draining soils are the optimal conditions for rosemary. In the Mediterranean some rosemary plants grow and thrive in soil seems almost entirely sand.

If you are planting rosemary in pots I recommend terracotta pots as they allow for drainage more so then plastic or ceramic pots which retain water even with drainage holes in the base.

With the right balance of watering and well draining soils, rosemary can recover from a drooping appearance and thrive for many years (as long as it is protected from the cold).

Rosemary Drooping due to lack of water (in pots)

Occasionally rosemary will droop because of under watering rather then over watering. This is not as common because rosemary thrives in drought conditions, however it can happen in pots, particularly if the pot is relatively small.

If the pot is too small it can dry out too quickly which can cause the rosemary to droop.

Plant rosemary in a pot that is around 16 inches across. A pot or container this size will ensure that there is enough capacity for soil which can retain some moisture after watering so that the roots can draw up water.

In hot weather it may be necessary to water potted or container rosemary once a week to ensure the plant has enough water.

Terracotta pots are a great choice of material for rosemary care as terracotta allows for some drainage and does not heat up as quickly as plastic or metal containers when in full sun which exacerbate drying and increase the chance of the rosemary drooping.