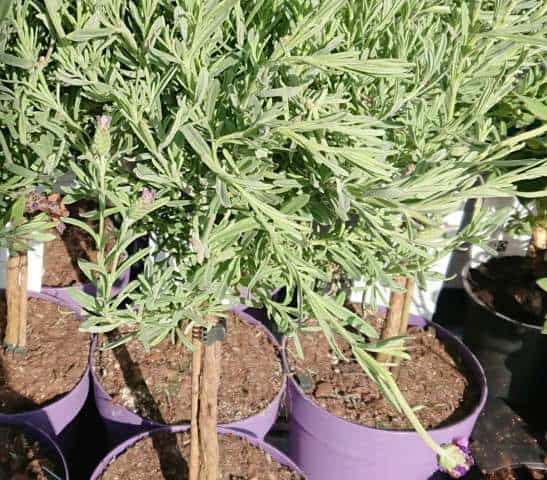 Lavenders require an annual prune and prefer poor soils, so the reason your lavender is not growing straight is because the lavender requires a hard prune to prevent a leggy appearance or the soil is too rich in nitrogen which causes lavender stems to flop over rather then grow straight.

Lavenders grown in rich soil are characterised by floppy growth, with fewer blooms in the summer and potentially leaves that are turning yellow whereas lavenders that require pruning often have woody growth, that lacks a uniform shape and can grow sideways rather then straight.

Other possible causes of lavender not growing straight are over watering, poor soil drainage, not enough sun and pots without drainage holes in the base.

One of the most common reasons for lavender not growing straight is because the lavender has not been regularly pruned. Lavenders require an annual prune in order to:

Lavender turns progressively woody over the course of its life. The leggy growth is less productive for displaying new flowers and often grows at different angles and sideways rather then growing straight.

A good annual pruning significantly slows down the formation of wood and keeps the new growth growing straight.

The longer the lavender has not been pruned, the more liable it is to not grow straight and the more difficult it is to prune effectively so that it looks tidy and so the new growth grows straight rather then a leggy appearance.

If the lavender is significantly woody they I would recommend that you replace it, or take cuttings for propagation. However if the lavender hasn’t been pruned for a year or two it can likely be saved and grow as normal.

Watch this YouTube video of how to prune woody lavender.

Another reason for lavender to not grow straight is because of an excess of nitrogen in the soil (or the use of a fertilizer) which causes lavender to grow sappy stems which flop over rather then grow straight.

Lavenders are accustomed to the sandy or stony soils of the Mediterranean. Sand, grit and stone do not tend to retain moisture or nutrients very well which results in a low to medium fertility soil.

Lavenders have specifically adapted to growing in these relatively harsh conditions and actually grow their best, display the most flowers and exude the strongest aroma in poor soils.

If you plant lavender in rich soils which retain a lot of nutrients and water or perhaps you have added manure to the soil mixture before planting then there will be too much nitrogen in the soil for lavenders to thrive.

The nitrogen stimulates lots of stem and foliage growth, but the growth tends to be structurally weak and flops over causing your lavender to not grow straight as it should.

The excess nitrogen also reduces the number of flowers on display in the Summer and the aroma from the foliage is not as strong. This growth is also more susceptible to fungal diseases then the lavender would otherwise be.

The solution… In order for lavender to grow straight and healthy you will have to either amend the garden soil, where it is currently planted or transfer the lavender to a pot, which is a great option as you have control over the soil profile.

The lavender requires a sand or grit as an amendment to balance the nutrients and emulate the sandy soil conditions of the South of Europe where lavender is grown commercially.

If you are planting lavender in pots, mix in around 1 third horticultural sand or grit and 2 thirds potting soil or compost.

(To learn more, read my article for the optimal soil mix for lavenders).

This will ensure the lavender’s soil is well draining (lavenders prefer dry soils) with the right structure and low enough in nutrients for the lavender to grow to their best.

The lavender won’t recover immediately if it has been in nutrient rich soil or has had fertilizer for a long time but it will gradually recuperate over the weeks and months and begin to grow straight.

If there is a significant amount of soft sappy growth then I would wait till the Fall or the next Spring to give it a good prune so it resembles more of a mound shape then a straggly plant that grows sideways!

Lavenders do not require additional fertilizer as they prefer low to medium soil fertility and grow to their best in the conditions.

Even commercial require who seek to maximise their yield plant lavender in sandy soil conditions as this ensures a greater concentration of lavender oil.

Other possible causes for lavender not growing straight are:

Lavenders are adapted to living in full sun and the more sun the more blooms, oils, fragrance and healthy foliage growth there will be.

Lavenders that are situated in a pot in the corner of a patio for example may be somewhat deprived of light and therefore lean towards the sun during the day rather then growing straight.

Turn the lavender round occasionally so the growth is not on one side or even better, move the potted lavender to a more open location with more light and the stems should grow straight.

Lavenders are adapted to arid climates with low levels of rainfall in countries such as Italy, France and Spain. Therefore they do not require much water even in hot weather and actually prefer the soil to be somewhat dry.

If the lavender is over watered or planted in slow draining soils (such as clay) then the soil will be too damp for the lavender to thrive. Lavenders in damp soil often droop down as a sign of stress.

If the lavender is specifically drooping rather then just not growing straight then you should scale back watering to once every 2 weeks to give the soil and chance to dry out and for the lavenders roots to recover.

Ensure the lavender is planted in well draining soil and only water if necessary and the lavender can recover.

Lavenders should be planted in a pot that is around 12- 16 inches across and has drainage holes in the base to allow excess water to escape.

Pots with good drainage or the use of drip trays underneath the pot has a similar affect as over watering as the soil will likely be too damp and the lavender growth can droop downwards.

(Read my article on choosing the best pot for lavenders).

Lavenders planted in the correct pots with good drainage should recover within a few weeks with the right care and appropriate conditions for lavender.