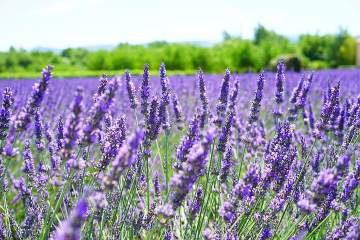 Assuming Lavenders are receiving the right care, then all species of lavender flower at some point during the Spring and Summer.

If a Lavender has not produced little or no flowers during the growing season then this is a sign that the plant is stressed. The healthier the lavender is the better it will bloom so there are a variety of reasons why lavender can be too stressed to flower:

The most common reason for lavender not flowering is that the lavender is planted into rich fertile soil.

This may sound counter intuitive as most popular cultivated plants thrive in healthy fertile soil.

Lavender plants however are adapted to low fertility, sandy or gravelly soils in their native home range of the Mediterranean in Southern Europe.

Sand and gravel contribute very little nutrients to the soil, but the provide the ideal soil structure that lavenders require.

For lavenders it is far more important to have soil that drains quickly and holds little moisture as they like their roots to be kept somewhat dry between periods of watering.

It is in these nutrient poor soils that lavenders produce their best oils, fragrance and flower display.

High fertility soils promote lots of foliage growth but that comes at the expense of flowers and will be to the detriment of healthy lavenders.

Lavenders in soils with a high nitrogen content will grow leggy with yellow foliage and most likely will produce little or no flowers.

To remedy this you have to amend the soil in order to replicate some of the lavenders preferred natural conditions. This is fortunately very simple to do.

Gently fork out the lavender plant out of the ground and dig in plenty of sand or gravel so that the soil is approximately 30% sand to 70% soil, but it is better to have too much sand then not enough so be generous.

For more information on amending the soil to balance out fertility, follow the steps in my article: How to transplant lavender successfully.

The best time to do this is the spring but if your lavender is turning yellow (a sign of excess nitrogen) then this will need to be done more urgently, but avoid transplanting in winter as lavender roots struggle to establish when planted into cold winter soils.

If you have amended the soil and other conditions (such as full sun and well drained soil) are in place then the lavender should make a recovery and produce flowers for the next year.

This point is very much related to the previous problem of soils that are too fertile.

Like all plants lavender does require the nutrients Nitrogen (N), Phosphorous (P) and Potassium (K). The difference is that Lavenders are not heavy feeders and an excess of these nutrients in the form of fertilizer will cause you lavender not to flower.

This is again because lavenders actually thrive on relatively neglectful conditions such as watering once every two weeks, blazing sunshine and low nutrient soil as this is the environment they are accustomed to living in, with sandy, alkaline soils of Southern Europe in countries like France, Spain and Italy.

Adding fertilizer to lavenders will stimulate lots of leggy foliage growth and deter flowering, which is contrary to the goals of any lavender gardener.

The most influential factors that encourage lavenders to produce flowers are sunlight, the right watering schedule, and soil that somewhat resembles that of the lavender natural habitat (which is easy to achieve) and twice yearly pruning, so skip the fertilizer in favor of consistent good care.

If you have added fertilizer to your lavender then I would encourage you to remove it from the soil and replant it in a different location as this ground will too fertile for the lavender to flower to its full potential.

3. Not Enough Sunlight to Flower

Lavenders need full sun to flower, produce oil and exude its best aroma. The less sun that a lavender receives, the less flowers that will be on display.

Lavenders are habituated to the sunny conditions of the Mediterranean where they grow best in full sunshine.

Whilst some species of lavender (English Lavenders, Lavandula angustifolia) do not need to the hot conditions of the Mediterranean to grow or display plentiful flowers, they all need as much sun as possible.

Lavenders will flower if they receive 6 hours of light per day during the spring and summer (preferably morning sunshine) but the more sun the better for flowering.

Lavenders need to be planted into soil that has a pH of 6.5-7.5. Lavenders can tolerate some mild acidity but prefer to be in slightly alkaline soils. Most garden soils are between pH 6-7 with 6 being acidic and 7 being neutral.

So it is possible that your garden soil is a little too much on the acidic side for lavenders to be healthy and produce flowers.

Therefore you may have to test the pH and amend the soil with agricultural lime or wood ash (which are alkaline) in order to raise the pH of the soil so that it is suitable for lavender growing.

(To measure soil pH easily in your garden, I recommend buying a soil gauge which is easy to sue, does not require technical knowledge and is available for a great price on Amazon!)

5. Over watered Lavenders May not Flower

Over watered lavenders will not be able to flower and will likely suffer from the fungal disease root rot. Lavenders only need watering sparingly (once every two weeks during the growing season) and established lavenders will likely attain all the moisture they need from rainfall without additional watering. (For more information, read my article on how often lavender should be watered).

Lavenders that are planted in soil that drains too slowly will have the same sort of problems as over watered lavender. If the soil is consistently wet then lavender will either be too stressed to flower and potentially die from the fungal disease root rot.

It is essential that lavender is planted into soil that allows excess water to drain away from the roots. Soils that have a high clay content tend to retain water which is unsuitable for lavender growing. If you have clay soil in your garden, read my guide on how to amend and change its structure to grow lavenders.

Lavenders are acclimatized to bright sunlight, low humidity and can tolerate breezy, coastal weather. Lavender does not grow or flower well in humid climates. High humidity can cause fungal disease, turning the foliage brown. This will stress the lavender so that it cannot produce flowers.

Transplant shock from planting or transplanting lavender at the wrong time of year or into less then optimal conditions can also stress the plant. Lavenders are best planted or transplanted in the early spring when the ground has warmed up.

Lavenders do not like to be moved or planted in Winter as their roots will struggle to establish in colder, moist soil and may suffer from root rot as a result. Read my article on how to transplant lavender whilst mitigating transplant shock.

9. Not all Lavender Varieties Produce Flowers at the Same Time

Assuming the plant is healthy, all lavenders should flower at some point during the spring and summer growing season.

English Lavenders (Lavandula angustifolia) are one of the most commonly cultivated garden lavenders and they tend to bloom in the Late Spring to early summer for around four weeks. Typically this is in the last two weeks of June and the first two weeks of July, but this can obviously vary due to inconsistent weather.

French (Lavandula dentata) and Spanish (Lavandula stoechas) lavender typically produce flowers for a lot longer, however they are not cold hardy so should be grown in climates with a mild Winter that does experience frost.

In the right conditions French and Spanish lavender can flower from Spring to late Summer and into the Fall, particularly if they are deadhead regularly to encourage more flowering.

So it may be the case that your particular lavender cultivar is yet to flower or you have missed the window of flowering depending on when you bought the plant.