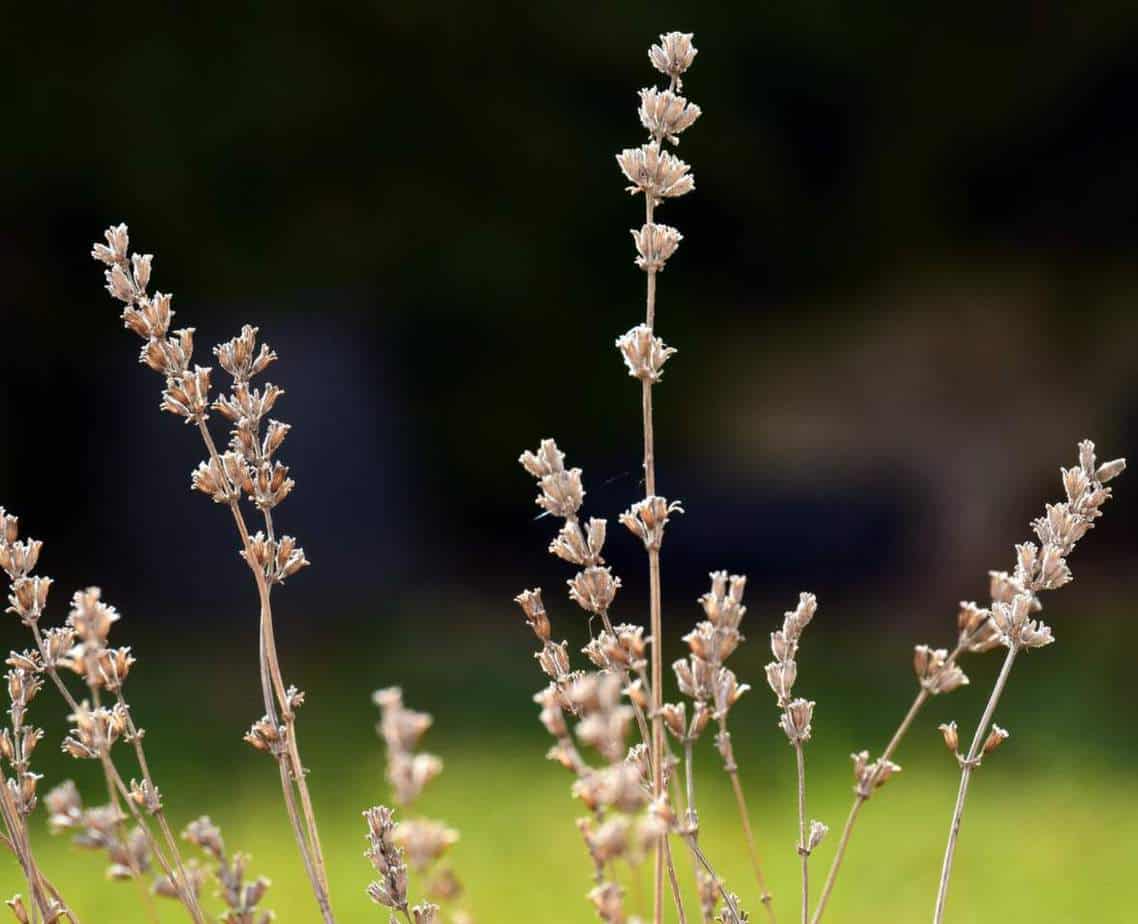 Lavender flowers can turn brown because of fungal disease (due to damp soil), frost damage or naturally turn brown as the flowers turn into seed heads.

Keep reading to learn why your lavender flowers have turned brown, whether it requires any attention and how to solve it…

1. Brown Lavender Flowers Due to Over Watering or Poor Drainage

Lavender flowers (and foliage) can turn brown as a sign of stress due to over watering, poor soil drainage or perhaps because of a pot without proper drainage holes in the base.

Whilst some lavender species tolerate cold climates (such as English lavenders and Intermedia lavenders), they are all adapted to living in dry, sandy or stony soils with low to medium nutrients.

If the lavender is planted in water retaining soil (such as clay) or perhaps compost that holds lots of moisture then the lavender is at increased risk of fungal disease and root rot.

If the lavender is drooping in appearance this is another symptom of fungal disease.

Lavenders grow to their best in terms of blooms and aromas in well draining soil and their roots like to be kept dry between bouts of watering.

Lavenders are drought resistant and heat tolerant so they thrive in dry conditions and do not require watering anywhere near as much as most plants in a typical garden.

The fungal disease pathogens that attack lavender, thrive in damp soils hence the important to keep the soil well draining (with lots of sand or grit) and water infrequently if at all when the lavender is established.

(To learn more read my article, how often to water lavender).

Often lavenders attain more then enough water from rainfall and do not require any additional watering. This is particularly the case in temperate climates with spells of rain and overcast days.

Lavenders that have a significant amount brown foliage and flowers may not survive as it depends on the extent of the damage.

However lavenders with brown flowers can often recover once they are planted in a more suitable soil profile with better drainage and the watering is significantly reduced.

(Read my article for more information on how to tackle lavender with fungal disease).

Its also important to plant lavender in a pot with drainage holes in the base to allow excess water to escape, other wise the soil will remain damp and increase the risk of fungal disease. Read my article for choosing the best pots for lavenders.

It is important to note that whilst the lavender requires some of the growing conditions of its native Mediterranean to grow healthy and produce healthy flowers, they do not necessarily have to have the high Mediterranean temperatures and mild Winters as long as they are in full sun and you choose a cold hardy species such as English lavender (Lavandula angustifolia) or (Lavandula x intermedia) lavender for your garden.

(Read my article to learn about how to create the optimal soil mix for lavenders).

2. Late frost in the Spring

A late frost is often the culprit when it comes to lavender flowers turning brown. The emerging flowers are often more tender then the foliage of the lavender which can result in frost damage.

This is particularly true of the early flowering varieties such as French and Spanish lavender which are more vulnerable to frost and flower earlier in the season compared to the English and intermedia varieties.

If you are in a climate with cold winters I recommend that you plant English (Lavandula angustifolia) and (Lavandula x intermedia) lavenders as they are far more cold hardy (hardy to USDA 5) and will survive Winter tolerating snow and freezing temperatures whereas Spanish and French lavenders generally only last one season without a mild Winter climate.

Snip off the frost damaged flowers if they have turned brown as this will increase the likely hood of more flowers later in the Summer and there should be no serious damage to the lavender.

3. Flowers Turn Brown up to Three Times per Year

The different species of lavenders tend to bloom at different times of the Spring and Summer and individual lavender lavenders flowers generally only last one month before turning brown, at which point they require deadheading which stimulates new flowers to emerge.

The French, Spanish and Lavandula x intermedia varties all tend to bloom up to three times throughout the Spring, Summer and even in the Fall if you are in a warmer climate with mild temperatures.

Each time it flowers, it will last approximately one month or so before the flowers naturally turn brown and require deadheading which stimulates more blooms.

This is a naturally process and so do not be alarmed if some of the flowers are turning brown whilst others are still purple and healthy looking.

Simply deadhead the lavenders with a pair of pruners and you will see more flowers throughout the growing season.

If the brown flowers are left, without being pruned they will turn into the seed heads that you can hear rattle when you shake the lavender. This is obviously a good way to collect the seeds, if you want to grow new lavenders, although I recommend that you propagate lavender cuttings rather then grow from seed as it is much easier.

(For all the best care practices, read my article, how to grow lavenders in pots and containers).