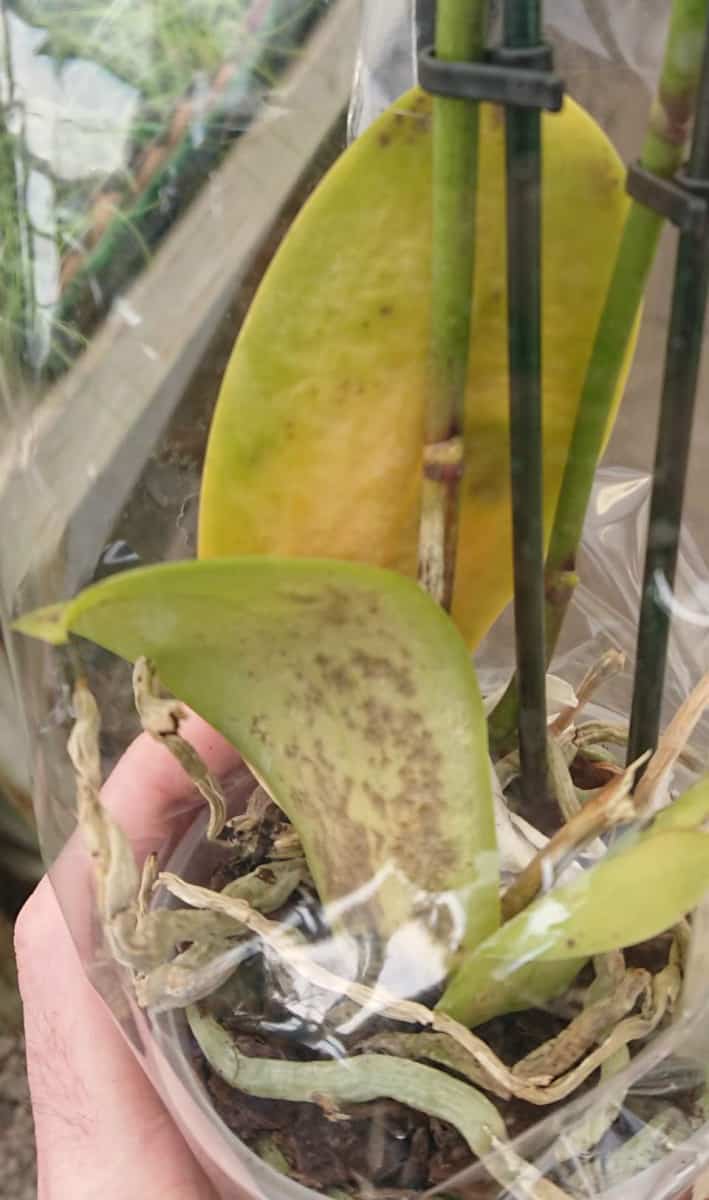 The reason for orchid stems turning yellow and dying is because the stem (or flower spike) naturally turns yellow and brown and dies back after it has displayed flowers. A yellowing stem does not necessarily indicate the orchid is unwell, as it is a natural part of the orchid’s life cycle.

It should be noted that what is commonly called an ‘orchid stem’ is actually called the flower spike, I am referring to it as the stem throughout the article.

Orchid stems typically only support one set of blooms per year (there can be exceptions to this) and then turn yellow and dried out.

Typically once the flowers have dropped off, the orchid turns yellow from the top and dries out.

As long as the leaves are green and the roots look healthy (green and plump after watering, with a slightly gray appearance, indicates healthy roots) then you do not have to do anything necessarily as the orchid is healthy.

Some orchid experts are of the opinion that you should let the stem turn yellow and dry out as the orchid is reclaiming the nutrients that it invested from the stem. This can take a long time, which means that your orchid may not display flowers for a long period.

However other (myself included) think it is best practice to cut the yellowing orchid stem back to the base, with a sharp pair of pruners, after it has begun to turn yellow as this stimulates the growth of a new stem (or flower spike).

Pruning helps promote the growth of a new healthy stem that can display more flowers, therefore you do not have to wait as long for new blooms, particularly if you take good care of the orchid by placing it in bright indirect light and use a specific orchid fertilizer.

You can also cut the yellowing flower stem just above a node, that hasn’t produced flowers, if part of the stem is still green. A new stem can actually grow from the node, which then of course displays flowers in the following weeks, if the conditions are favorable.

It should be noted that any flowers that grow from a node tend to be smaller then the initial bloom that is produced from a new flowers spike, which is why I recommend trimming the stem back to the base as this stimulates the growth a a much stronger stem with a greater display of flowers.

(To learn more tips and solutions for flowering orchids, read my article, why is my orchid not blooming?)

Orchid stems turn yellow if they are in too much sunlight. Orchid stems and leaves are adapted to growing in the shade of a forest canopy and need either, indirect light or filtered light. If they are in an direct sunlight the leaves and stem scorches yellow.

Most houseplant orchids are phalaenopsis orchids (moth orchids) which grow in tropical forests as epiphytes (grows on other trees) in their natural environment, where they receive either bright, indirect light or some scattered light among the leaves.

Therefore the orchid leaves and stems are very sensitive to blazing sunshine and quickly turn a scorched yellow as a result.

Move the orchid to an area of bright indirect light to prevent the plant from being scorched.

If the stem has been badly scorched from green to yellow, then it does not recover its appearance and becomes too damaged to support flowers.

I personally recommend just cutting the stem right back to the base with a sharp pair of pruners, if it has been damaged by sunlight. Cutting the damaged stem back to the base allows the orchid to concentrate its energy and resources on growing a new, healthy stem that can support a stronger bloom when the conditions are favorable.

It is worth noting that orchids can grow a new stem and flower at any time of year, but they tend to bloom for in the Spring and Summer due to the brighter light and longer day lengths.

To ensure the orchid has the necessary nutrients to grow, I recommend using a specific orchid fertilizer, which provides the orchids with the right nutrients an the optimal concentration, so that the orchid can invest its energy to growing a new flower stem and display flowers.

Yellow orchid stems and leaves can indicate the orchid roots are dying because of root rot. Orchids need porous, potting medium that dries slightly between each bout of watering. If the potting medium stays too damp or the soil is too compacted the roots die back which causes the stem and leaves to turn yellow.

Orchids are epiphytes that grow in trees (as opposed to terrestrial plants which grow in soil) in their native tropical environment.

Therefore orchid orchids need to grow in a potting medium that replicates their natural conditions, allowing for good drainage and for air to circulate around the roots, with ideally, humid conditions.

Orchids grow best in based potting mediums. If the orchid is in normal potting soil or compact moss then these potting mediums retain too much moisture around the roots and they are too compacted for the orchid to tolerate which results in rotting dying roots.

If too many roots die back then the remaining roots cannot draw up enough moisture or nutrients to support the leaves and stems which causes the flowers to drop, and for the stem and leaves to turn yellow.

To save the orchid is it important to reduce watering, so that the potting medium dries out slightly between each bout of watering. (Read my article, how often to water orchids).

Misting the leaves to increase the humidity can also reduce stress on the orchid.

Take the orchid out of the potting medium and inspect the roots. Healthy roots should appear green straight after watering and turn slightly gray in between each watering, whilst heaving a firm, plump texture.

Unhealthy roots turn gray, shrivel up and turn papery if they are dying back due to overwatering and soil compaction. (If you are unsure what an overwatered orchid looks like, read my article, is my orchid over or under watered?)

Snip off the unhealthy dying roots with a sharp pair of pruners, either back to healthy growth or back to the base.

Replace the potting soil with pine bark based orchid potting soil which emulates the orchids native conditions, allowing for good drainage and for air to circulate around the roots.

Repot the orchid in a pot with drainage holes in the base, ideally a transparent plastic pot, so that you can see the conditions of the roots and more easily tell when your orchid needs watering.

Orchid roots can also photosynthesize which helps the orchid regenerate so a clear pot also allows for the sunlight to reach the roots. (Read my article, best pots for orchids).

It is best practice to wait for any yellow leaves to drop off of their own accord, as pulling or cutting them off can cause unnecessary wounds which can become infected.

Cut back the orchids yellow stem (flower spike) if it has turned yellow and completely died back as this can help to stimulate new growth.

Keep the orchid watered once a week, mist the leaves and roots to increase humidity and locate the orchid in bright indirect sunlight and the orchid can recover.

(To learn more, read my article, how to save an orchid with yellow leaves).