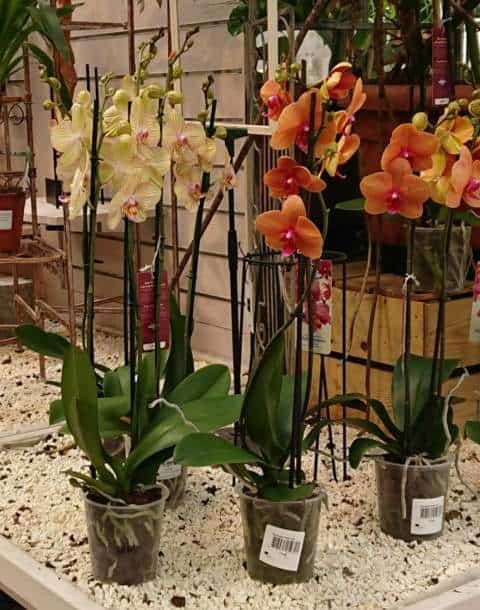 It should be noted orchids naturally drop their flowers after 6-10 weeks as part of a natural cycle.

The most popular houseplant orchids (Phalaenopsis , also known as ‘moth’ orchids) typically flower once per year (although they can flower more often in the optimal conditions) and the blooms usually last for 6-10 weeks as long as the conditions are favorable.

Moth orchids can flower at any time of the year but typically form new flower spikes in the cooler Winter months and the flowers are display in the Spring.

When the temperature cools at night this signals to orchids it is the right time to flower in their natural environment in time to display flowers for Spring and Summer.

Orchid flowers can drop 6-10 weeks or so as the orchid reacts to the changing seasons with differing levels of light and temperature. This is part of the orchid’s natural cycle and does not necessarily indicate a sign of stress.

Prune back the flower spike to about half an inch above an emerging node as orchids do not flower again from the same stem.

This helps to stimulate the orchid to grow a new flower spike from which to display more flowers. For exactly how to do this, watch this helpful YouTube video below:

(If your orchid is not flowering then read my article, why is my orchid not blooming? for how to help stimulate more flowers).

Once the flowers have dropped from the stem (also known as a flower spike) it can turn yellow and dry, in which case, prune the stem back to the base of the orchid. Read my article, orchid stem turning yellow?

One of the most common reasons for orchid flowers and flower buds dropping is because of a sudden fluctuation in temperature that is outside of the orchid’s usual temperature range. This happens most often due to indoor heating in Winter which sudden increases the temperature, causing the flowers to drop.

Orchids are able to live in a range of 66°F to 86°F which is suitable for most indoor environments. However orchids tend to get accustomed to the specific environmental conditions.

A sudden change in temperature (whether it is hot or cold) outside of the orchid’s usual temperature range can cause enough stress for the orchid to sudden drop all its flowers or drop the flower buds before they have opened.

Sudden increases or decreases in temperature that affect orchids are most often caused by:

Orchids also prefer a cooler temperature in the evening then during the day as this mimics the natural temperature cycle in their native environment.

Typically in houses the temperature increases at night (particularity in Winter when indoor heating is on) which is contrary to the orchid’s preferred conditions.

The preferred temperature range at night for moth orchids (Phalaenopsis) is between 16-19°C (61-66°F). So it is important to find an area of the house that is out of the way of draughts, and away from direct sources of heat.

Place your orchid slightly back from a cold window sill as if the leaves or flowers are in contact with the window at night the cold temperature can cause the flowers to drop.

In consistent temperatures the orchids flowers should last 6-8 weeks before falling off.

Orchids are tropical plants that are native to forests in Asia where the humidity tends to be in the range of 50% to 80%. The humidity in houses tends to be much lower at around 10%. The difference in humidity causes the orchid to lose water too quickly and the orchid drops flowers as a sign of stress.

Whilst orchids are tropical plants, the popular Phalaenopsis (‘Moth’) orchid’s have been cultivated so they can tolerate somewhat lower levels of humidity of around 30% which is lower then its natural environment but the orchid still requires more humidity then the air in most houses.

The humidity in houses can fluctuate fair drastically for reasons such as:

Flowers dropping is one of the first signs that the orchid is stressed from low humidity, but low humidity also saps moisture from the leaves, aerial roots and flowers stressing the orchid, so that the leaves can also wilt or turn brown as a sign of drought stress.

How to Solve it:

To prevent orchid flowers from dropping it is important to replicate the orchid’s preferred natural higher levels of humidity in the house by creating a humid micro-climate which reduces drought stress and creates favorably conditions for orchid flowers last longer.

Keep the orchid away from draughts, air currents and away from sources of heat as this is contrary to the natural conditions.

There are three effective ways to create a humid micro-climate in your home:

For most houses I recommend a combination of misting the leaves or placing the orchid on a tray of water filled with pebbles (the water evaporates around the orchid which increases the humidity).

However if you live in a particularly arid climate then the best option is a plant humidifier (available at garden centers and on Amazon) as they are particularly effective at recreating the optimal conditions for orchids.

Once the orchid is in a more preferably humid environment then it can hold its flowers for longer and any developing flower buds can emerge without the increased risk of dropping off.

Orchids require at least 40% humidity and should be watered at least once a week when in flower or whilst the flower buds are developing.

The leaves of an orchid suffering from drought stress turn leaves yellow, with a wilting appearance.

The flowers drop off quite suddenly after a period of drought stress as the orchid cannot sustain them and drops the flowers to conserve its resources, so it can increase the chance of immediate survival.

Always water orchids with a generous soak so that excess water runs from the drainage holes in the base and all of the potting medium is evenly moist.

You can also place the orchid’s pot in a basin of water from a few minutes as a different method of watering as this is an effective way of ensuring the potting medium is evenly moist.

If the orchid is watered too lightly then only the top inch or so of the potting medium becomes moist and the water does not reach the roots properly where it is required.

This is assuming that the orchid is planted in a pine bark based potting medium, formulated specifically for orchids as this has an areaeted stricture and emulates the growing conditions of the orchids native environment.

Orchid roots are sensitive to overwatering as too much water excludes oxygen from the potting medium which can interfere with the orchids ability to draw up moisture and nutrients. This causes dying roots and results in the flowers and flower buds falling off.

If the orchid’s roots are dying then orchids drop the flowers and flower buds to conserve its resources as it tries to survive and maintain the essential plant tissue such as the remaining roots, leaves, pseudo-bulbs which often turn yellow as a reaction to overwatering.

If you are watering more often then once a week, then you are overwatering and this is likely the cause of the orchid losing its flowers.

In addition to watering, the right potting medium is essential to create the optimal balance of moisture for your orchid.

Pine based potting mediums are best for orchids as the recreate the aerated, well draining conditions in which orchids grow in their natural environment.

Orchids are epiphytic (grow in trees, rather then in the ground) and quickly die back if they are planted in potting soil as this excludes oxygen from around the roots and retains too much water causing a dying orchid with flowers falling off.

(Read my article, how to revive a dying orchid).

Repot your orchid every 2-3 years as the pine bark or moss decomposes, causing it to retain too much moisture and less oxygen.

Orchids should be repotted every 2-3 years as the potting medium decomposes overtime (which retains too much moisture and reduces oxygen around the orchids roots) but repotting should be avoided if the orchid is in bloom or the flower buds are developing.

If the orchid experiences any kind of stress whilst it is flower or the flower buds are developing then the orchid prioritizes survival and drops any flower buds as flowers and flower buds require considerable energy and resources from the plant.

Stress from repotting usually is because the roots are disturbed from their established potting mix and the roots cannot draw up water efficiently when they are repotted.

It is also best to repot orchids in pine bark based potting mediums as they have the optimal structure to create the balance of moisture for orchids to thrive.

If the orchids is repotted into a moss based potting medium then the contrast between the well draining pine bark and the comparatively higher moisture retaining moss often causes the flowers to fall off and dying roots.