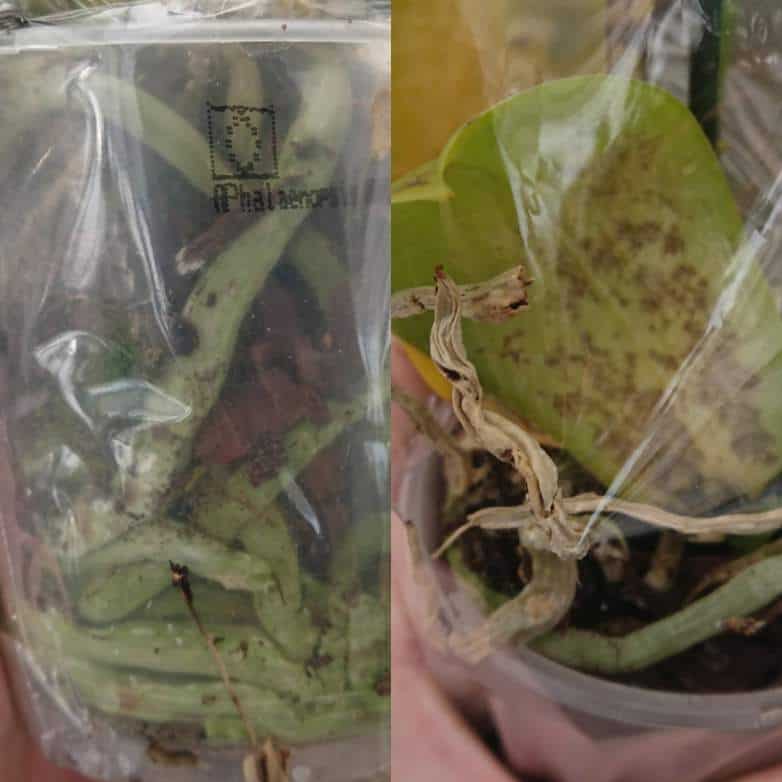 Moth ‘phalaenopsis‘ orchids (the most common species of houseplant orchid) store moisture in their leaves and roots, so when the orchid is underwatered, the orchid draw upon these moisture reserves causing the roots to shrivel and the leaves to wrinkle.

Here is a reference table for the key differences between over and underwatered orchids:

Note that growth slows down considerably if the orchid is underwatered, whereas growth tends to stop and the orchid deteriorate more quickly due to root rot, caused by overwatering.

How to Tell if an Orchid is Overwatered

Symptoms of an over watered orchid are: The roots are brown soft and mushy with a bad smell, the leaves turn yellow and brown with a wilting appearance. With consistent overwatering the roots turn from brown and mushy to shriveled and papery white, which indicates the roots have died back. The buds and flowers may also fall off.

There is a lot of overlap between the symptoms of overwatered and under watered orchids, so the key way to tell whether your orchid is overwatered rather then underwatered is to look at the roots and feel the potting medium.

Moth orchids (the most common houseplant orchid) are epiphytes that grow in trees in their native tropical environment and therefore require very well draining, humid conditions.

Healthy orchid roots appear green or light grey and feel firm and do not have a notable smell.

When orchid roots are in overwatered or boggy soil, they develop root rot and fungal diseases, which turns the roots brown and soft with a rotting appearance and a bad smell.

As the roots rot and die back they turn shriveled and to a papery, gray white color, which indicates the root is dead.

If the orchids roots are dying then they can no longer uptake water or nutrients to transport around the plant to the flowers, stems and leaves which causes the leaves to turn yellow and wilt with a dying appearance.

The leaves often turn yellow with brown spots, which usually indicates fungal disease, as a result of overwatering.

The flowers are also very likely to fall off if a significant number of the roots are dying.

It is important to highlight that overwatering alone may not be the only cause of the orchid dying.

A good watering schedule needs to be in conjunction with good drainage. It is imperative that moth orchids are planted in a special orchid potting mix, composed of pine bark.

This recreates the typical drainage conditions of the orchids native environment, allowing water to drain easily after watering and allowing air to circulate around the roots.

The problem is organic potting mediums decompose over the years which turns the pine bark pieces into compost, which retains too much moisture and restricts airflow around the orchid’s roots, resulting in an over watered, dying orchid.

It is also important to plant orchids in pots with lots of drainage holes in the base and to empty any saucers and trays, underneath the pot regularly to avoid the symptoms of overwatering.

How to Fix Overwatered Orchids

To fix overwatered orchids, reduce the frequency of watering, cut away any dying brown roots with a sharp pair of pruners, repot the orchid into a new pot with a orchid based potting medium to improve drainage and mist the leaves.

Do not remove any yellow leaves as they are likely to die back and fall off on their own. Removing them when the leaf is still attached can causes additional stress to the already overwatered orchid.

Transparent plastic pots also have an additional benefit for saving the overwatered orchid. Moth orchids are very unusual in that their roots can also photosynthesize (provide energy for the plant through sunlight) which is usually the function of leaves. (Read my article, choosing the best pots for orchids).

As overwatering can cause leaves to turn yellow and die back, they can no longer photosynthesize.

The roots of the orchid in their clear plastic pot can attain enough light and therefore energy which allows for new green leaves to emerge so that the overwatered orchid can be saved.

(Read my article, how to water orchids).

How to Tell if an Orchid is Underwatered

Symptoms of an underwatered orchid are: The growth is stunted, leaves start to wrinkle with a wilting appearance. The flowers and flower buds drop off or do not develop at all. The orchids roots shrink, and turn white and papery.

There is a lot of overlap between the symptoms of an overwatered and underwatered as both can cause the orchids leaves to turn yellow and wilt, as well as the buds and flowers falling off.

Brown, rotting roots is exclusively as a result of overwatering and poor drainage.

Therefore if the orchids roots have turned from a plump, firm appearance to a shriveled appearance, but do not show any signs of rotting, turning brown or smelling foul, then your orchid is underwatered.

Orchids store moisture in their roots, which is why they should feel firm if properly watered.

Orchid may also be watered with the right frequency (around every 7 days) but still suffer from underwatering, if it is watered too lightly.

Orchids should be watered with a generous soak, so that the potting medium is evenly moist.

If the orchid is watered too lightly, then only the top inch or so of the orchid’s potting medium becomes moist and the orchid’s roots cannot access the moisture they require which results in a underwatered orchid with shriveled roots.

Under watering can also be compounded by other factors such as:

How to Fix and Underwatered Orchid

To revive an underwatered orchid, give the orchid a good soak so that the potting medium is evenly moist. Mist the leaves and aerial roots to increase the humidity and snip back any roots that have turned white and died back.

The leaves can often revive once a good watering schedule has been established and misted regularly, turning plump again from a wrinkled appearance.

Sometimes some individual leaves turn yellow and drop off which isn’t necessarily an indication that the orchid is dying as new leaves can emerge during active growth once the orchid has more favorable conditions.

Avoid using any orchid fertilizer whilst the orchid is underwatered as this can promote growth, when the orchid is already stressed.

(Read my article, how to revive a dying orchid).