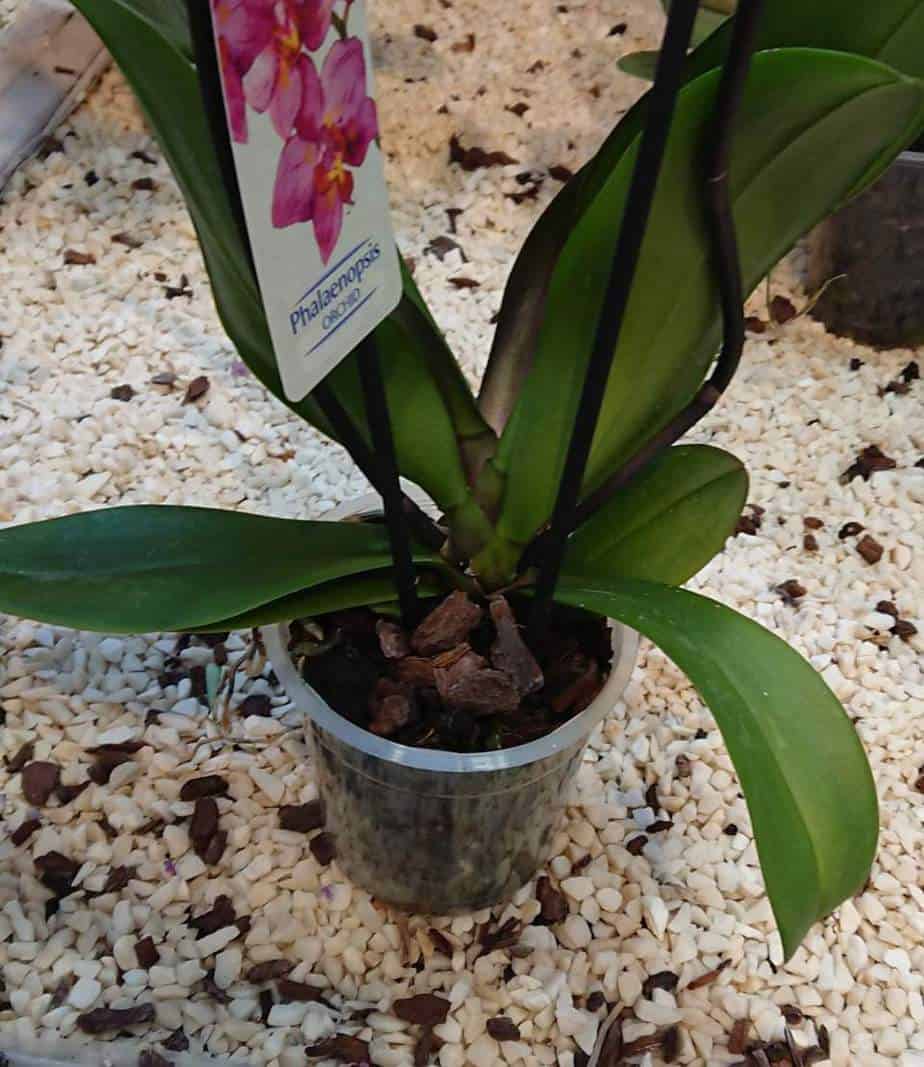 Most often, the reason for orchids wilting is because of overwatering or the potting medium is too compacted and retains too much moisture. Orchids require good drainage and need air to circulate around the roots. If the potting soil is saturated this causes roots to die and results in orchid leaves and flowers wilting.

It should be noted that orchids are sensitive to environmental change and wilting is a sign of stress and there are several reasons for orchids to wilt.

To revive wilting it is important to create the conditions of their optimal environment with higher levels of humidity, indirect sunlight, watering around once per week and planting orchids a pine based potting medium to allow for good drainage and air to circulate around the roots.

Here are the most common reasons for orchids wilting:

The reasons for orchid leaves wilting are because of low humidity, excessively hot or cold temperatures, drought stress or overwatering. Wilting and yellowing orchid leaves indicates the orchid is overwatered or the potting medium retains too much moisture.

Whilst orchids can tolerate occasional temperatures that fall outside of this range, a prolonged period of hot or cold temperatures, results in the leaves and flowers wilting due to stress.

The most common reason for orchid flowers wilting is because of temperature fluctuations and low humidity. Orchids flowers are very sensitive to sudden changes in temperature, particularly cold snaps and the flowers can wilt and drop off as a result.

If your orchid is on a window sill, and perhaps the leaves are even in contact with the window, then the window frame can be a much cooler temperature then the rest of the room and the cold shock can cause the orchid leaves and flowers to wilt.

The most common types of houseplant orchids (moth orchids ‘phalaenopsis‘) are native to tropical climates where they grow in climates with humidity of 65% or more.

It is often the case that the air houses are much lower then 65% humidity and air currents such as air conditioning, draughty areas or convention currents from sources of heat can all create an environment that is too low in humidity for orchids which can causes the leaves and flowers to wilt.

Low humidity as well as cold temperature is also often the cause of flowers and buds wilting and dropping off.

Orchids require a really generous soak every time you water them or the leaves can wilt and shrivel. Typically watering once a week is enough to meet the watering requirements of the orchid and not risk root rot.

If you water orchids too lightly then only the top inch of the potting medium becomes moist and the water does not reach the roots where it is required and causes the leaves and flowers to wilt.

Orchids Wilting Due to Overwatering

Moth orchids (the most common type of houseplant orchid) are epipthyes which means they grow on other trees or in loose gravelly soil in their native forest environment.

This means that orchid roots grow conditions in which air can circulate around the roots and water drains away very quickly, rather then the roots sat in consistently damp, compacted soil.

This is why pine bark based potting mediums are best for growing orchids as they replicate the areaeted, well draining conditions to which the orchids roots are adapted.

Orchids are very sensitive to overwatering and their roots being in soil that retains too much moisture and restricts the flow of oxygen around the roots which results in the roots rotting and dying and they can no longer transport water and nutrients to the leaves which causes them to wilt and turn yellow.

Orchids can also wilt and suffer the symptoms of overwatering if they are planted in pots without drainage holes in the base or because the saucers or trays underneath the pot is retaining water which causes the potting medium to stay consistently damp and causes root rot.

(Read my article, why is my orchid dying for how to save orchids with root rot).

Orchid leaves can wilt if they have been in the same potting medium for too long. Orchids require a loose, open structure to the potting medium to allow air to circulate around the roots and for good drainage. Potting mixes decompose over time and retain too much moisture and exclude oxygen.

Even if the orchid is planted in the ideal wood bark based potting medium this can become a problem.

Organic matter breaks down over time (just like a compost heap) even if it is protected indoors. Therefore the pine bark, moss or any other orchid potting medium that exists, breaks down to the point it no longer has the same open, well draining structure that orchids require.

Once the potting medium has decomposed it can retain much more water and suffocate the roots which need more air and even light then most plants.

If the roots are deprived of oxygen because the potting medium has decomposed or they are surrounding by material that retains too much water, then the orchid roots can die back which results in the leaves and flowers wilting.

Therefore it is best practice to repot your orchid in new potting pine bark based mix every 2 years to ensure the orchid roots stay healthy and prevent the leaves from wilting.

How to Revive a Orchids with Wilting Leaves and Flowers

To revive a wilting orchid it is important to recreate the conditions of their natural environment with high humidity, warm temperatures, bright indirect sunlight ensure the orchid is planted in a pine bark potted medium and water orchids with a good soak once every 7-10 days.

Wilting leaves and flowers are a sign of stress due to the environment not being to the orchid’s liking, so saving your wilting orchid is usually about determining what environmental stress is causing the wilting and correcting any conditions to create the optimal environment in your home for your orchid.

Once the orchid flowers have wilted or dropped off it can takes some time before they revive.

Orchid Leaves tend to revive more quickly once you have amended the conditions to be more favorable for the orchid.

The reason for orchids wilting after repotting is because of transplant shock, planting the orchid in the wrong potting medium or overwatering. Orchids are sensitive to environmental changes and require time to adjust to a new set of conditions, often wilting temporarily as a sign of stress.

The most common reason orchids wilt after repotting is that they are replanted in the wrong type of potting medium that is too compacted, retains too much moisture and excludes air from around the roots.

Orchids are epiphytes which means they grow on other trees in a forest canopy.

Therefore they are adapted to a growing medium that drains quickly and allows air to circulate around the roots.

Regular potting soil retains too much moisture and does not have an areaeted structure, that allows oxygen to reach the roots as easily which can prevent effective root respiration (and causes wilting orchid leaves).

Moss is also often used as a potting medium for orchids, however it can retain too much moisture for the orchids roots to tolerate, particularly when it decomposes, causing the roots to die back which results in orchid leaves wilting and turning yellow.

Whilst the exact set up of a forest canopy is too difficult and impractical to replicate indoors, planting orchids in pine bark is the best way to mimic the orchids natural conditions as size of each pine bark piece is large enough to create enough space throughout the potting medium, so that air can freely circulate around the roots and water can drain efficiently to prevent root rot.

Also consider that when repotting your orchid, ensure your new pot has drainage holes in the base and that any saucers or trays underneath the pot are emptied of excess water regularly.

Orchids Leaves and Flower Wilting Due to Transplant Shock After Repotting

Often when people repot their orchids they may move the orchid to a different location, which is a common reason why they wilt.

Orchids become adapted to their current surroundings and if their growing conditions suddenly change they often react by wilting temporarily depending on the contrast in conditions.

Orchids prefer a consistent watering schedule (which should be adjusted according to the time of year) sunlight and like to be kept away from any draughts or significant temperature fluctuations.

If you have repotted your orchid and move it, then the orchid has to contend with a different environmental conditions and suffer an interference with the root system which can cause the roots to not uptake water as efficiently temporarily whilst the plant adjust to the conditions in its new pot and potting medium.

If the roots cannot uptake moisture as efficiently and you have moved the orchid to room with a higher average temperature or a location with more sun then the orchid wilts due to dehydration.

How to Revive Orchids Wilting After Repotting

To revive wilting orchids after repotting it is important to grow orchids in the optimal conditions and water with a good soak after repotting to help the roots draw up water and adjust to the new potting medium. Locate the orchid is in partial shade and in cool conditions to help it recover from wilting.

(Read my article choosing the best pots for orchids).