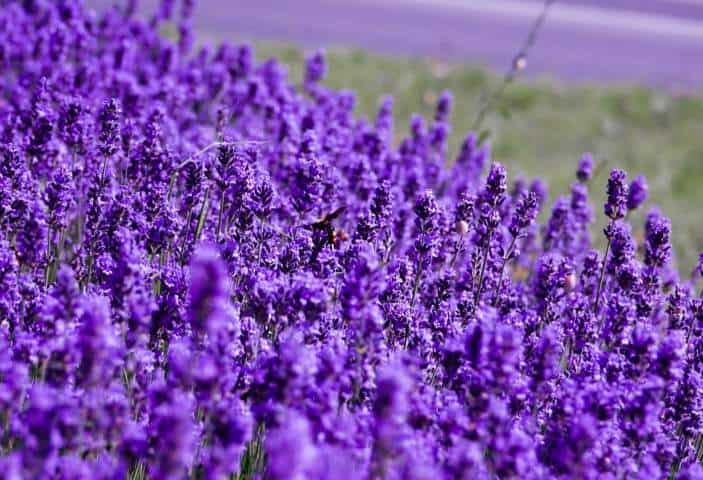 Lavender ‘Phenomenal’ (Lavandula x Intermedia) is a perennial, evergreen, sub shrub that is one of the most versatile lavenders, capable of thriving in dry, hot and cold climates and is notable for tolerating some humidity.

Where will Lavender Phenomenal Grow?

Lavender ‘Phenomenal’ is one of the most versatile lavender varieties in terms of where it can grow.

Lavender Phenomenal is a hybrid lavender that retains the cold hardy characteristics of the English lavenders but also has the longer flowering season of the Portuguese lavenders.

Not only can it thrive in both hot, arid regions (such as Southern Europe and California) as well as colder climates (such as Oregon, Washington and Northern Europe) but it is the only lavender variety that has some tolerance to humidity.

There is even a commercial lavender farm that grow lavender x intermedia in the humid climate of South Carolina which has one of the highest average levels of humidity in the United States (with some special adjustments to the growing conditions).

When does ‘Phenomenal’ Bloom?

Lavender ‘Phenomenal’ blooms for several weeks in the mid-summer (usually in June) and can carry on blooming in to the Fall with the optimal climates and growing conditions.

Regular deadheading of the flowers throughout the summer, redirects the plants energy from developing seeds to displaying more blooms which extends the flowering time of lavender ‘Phenomenal’

Lavender ‘Phenomenal’ fragrance is strongest and the flowering is most spectacular in the hottest and driest summers and when the lavender is planted in nutrient poor soils.

How to Care for Lavender ‘Phenomenal‘

Lavender ‘Phenomenal’ is a hardy lavender variety that thrives on neglect.

Whilst it can thrive in a variety of climates there are some care requirements and best practices that you need to know to grow ‘Phenomenal’ so that it stays healthy, displays flowers and exudes its strong aroma…

One of the most important aspects of caring for ‘Phenomenal’ is to prepare the soil properly before planting.

Lavenders as a species originate from the Mediterranean coast where the soil is sandy, low in nutrients, well draining and somewhat alkaline.

To grow lavender ‘Phenomenal’ successfully in your garden it is important to recreate these soil conditions.

Well draining soil is imperative as lavender roots do not like to be in damp soil as this encourages fungal disease and root rot, therefore ‘Phenomenal’ does not grow well in clay soils, slow draining or boggy soils or soils that are rich in compost and retain moisture.

Plant the lavender in soil that has been amended with horticultural sand or grit with some ordinary multi purpose compost. Ensure that the compost is not enrich with fertilizer or moisture retaining agents.

This will help to mimic the well draining soil characteristics of the lavenders native environment and allow water to drain away from the roots quickly so that the plant stays healthy and there is less risk of root rot or fungal disease.

For more information of preparing soil for lavender read my article for the optimal soil mix for lavenders.

Lavenders are plants that thrive in harsh conditions with sandy soils that do not retain much nutrients. Lavender ‘Phenomenal’ as with all lavenders is specifically adapated to growing to their best in terms of blooms and aromas in nutrient poor soils.

Therefore you should not add any fertilizer or add high nitrogen soil amendments such as manure. An excess of nitrogen will stimulate foliage growth with fewer flowers and the leaves may even turn yellow as a sign of stress.

When planting ‘Phenomenal’ add around 1 third sand to 2 thirds compost as this will balance the nutrient profile and create the lower fertility conditions that lavender require to grow and be healthy.

Another characteristic of the lavenders native environment is that the soil is often slightly alkaline, although lavender ‘Phenomenal’ can tolerate mildly acidic soils of pH 6.5 (7 is pH neutral) to pH 8 (which is alkaline).

If your garden has plants that are thriving such as azaleas, rhodedndrums, camalias and roses then the soil is likely acidic which is not suitible for lavenders.

You can amend the soil by adding horticultural lime (used to amend acidic soils to an alkaline pH and is available from garden centers) to the planting area before planting or plant lavender in pots which is a great option as you have control over the soil profile and you don’t have to amend the garden soil.

Lavenders of all species are native to climates with blazing sunshine, hot weather arid conditions, with well draining soils and infrequent rainfall.

Therefore lavender ‘Phenomenal’ is a easy plant to maintain as it thrives on neglectful watering.

Far more problems are caused by over watering lavenders then under watering as lavender likes the soil to dry around the roots between bouts of watering and rainfall.

Water with a generous soak to encourage the roots to establish in the soil to access the moisture and nutrients they require rather then a light watering which causes the roots to grow shallow.

Over watered lavender tend to droop and the foliage may turn brown. If the is the case the plant is suffering with root root or another fungal disease.

Read my article for the solutions for lavenders with fungal disease.

If you water ‘Phenomenal’ infrequently and plant in well draing soil amended with sand, then the diseases that result from over watering should not be a significant problem and the plant should remain healthy.

Lavender ‘Phenomenal’ is a hardy variety of lavender that can be planted at any time during the Spring, Summer or Fall although the best time is the Spring (around April or May).

Spring is often the best time to plant lavender ‘Phenomenal’ because the weather is heating up which favours the lavender, yet it does not have to contend with intense heat and sunshine if plant in Summer whilst the roots are establishing in the soil.

If you plant ‘Phenomenal’ in the early Spring then the plant has enough time to establish to the soil before flowering in the mid summer and the plant will be hardy and resilient by the time the cold weather and freezing temperatures of Winter.

Planting in the Fall is a good option too as the soil is still warm from Summer so the roots can establish relatively quickly and the plant does not have transplant shock in the Summer when temperatures are high.

Summer planting is also possible but there is a risk of drought in the intense heat before the lavender roots establish. Once the lavender has esbtalished the ‘Phenomenal’ is drought resistant and heat tolerant.

Read my article for how to plant or transplant lavender without transplant shock.

Lavender Phenomenal is a fairly large lavender with a height of 32 inches and a width or 30 inches once fully grown.

However it often depends on the climate and growing conditions how big the lavender will grow to, with ‘Phenomenal’ growing to a larger size in climates that have conditions like the Mediterranean climate and slightly smaller in colder climates due to a shorter growing season.

It takes approximately 2 years for ‘Phenomenal’ to grow to full size.

Therefore you have to space the lavender according to the size when fully grown.

For the healthiest lavender with the most blooms I recommend planting ‘Phenomenal’ 3 feet away from each other and other plants.

This will allow airflow around the lavenders foliage which reduces the risk of fungal disease. Also this will give the lavenders root system enough space in the soil to access nutrients and water without having to compete with other lavenders.

Lavender ‘Phenomenal’ requires full sun for the most blooms and strongest aromas, so plant the lavender where it is not shaded by any other plants in the garden.

Lavender ‘Phenomenal’ is unusual in that it can tolerate some humidity. Therefore it can make a great decorative hedge as it will cope with the micro-climate of being planted slightly closer together more so then other lavenders.

For hedging, plant ‘Phenomenal’ around 2 feet away from each other for a hedge that forms a continuous block without any gaps.

Although 2 feet may seem quite far apart when first planting new plants, remember that ‘Phenomenal’ is a fairly large lavender and it will grow to its full size in around 2 years, so some patience is necessary but they do look spectacular when in bloom in the Summer.

Lavender ‘Phenomenal’ also lives a long time (up to 15 years) with the right care, compared to some other lavender varieties and it is cold hardy so it will tolerate frost, ice and snow in the Winter so you do not have to replace plants that suffer damage as often in the Winter.

(To learn more read my article on spacing lavender for hedges).

When and How to Prune

It is possible to successfully prune lavender ‘Phenomenal’ in the Spring or Fall but I recommend Spring pruning.

It is necessary to prune lavenders annually to promote more flowers and to increase the life span of the lavender.

Lavender only flowers on the stems of new seasons growth. Lavender ‘Phenomenal’ blooms in the mid Summer so by pruning in Spring, it stimulates new growth of stems that will support many flowers.

(Read my article how to increase lavender blooms).

Also If you are growing ‘Phenomenal’ in a colder climate, the lavender has all season for the new growth to mature and prepare for Winter, whereas if you prune too late in the Fall the wounds from the pruning can be more vulnerable to Winter damage.

Always prune at least the top third of lavender growth and try to create a mound shape as this resists damage from Winter weather such as snow.

The most important rule of pruning all lavender is to not cut back into the woody base of the plant as this older wood is not productive and does not support the new stems that display the flowers.

For a great visual guide to pruning, take a look at this YouTube video:

Growing in Pots and Containers

Lavender ‘Phenomenal’ grows very well in pots an containers as pots have more favourable drainage conditions then garden soil and they can also provide improved airflow.

Planting in pots is also very useful if your garden soil is not very good for growing lavenders (too acidic or slow draining) as you can control the soil profile and amend it much easier then with garden boarders.

The care for ‘Phenomenal’ in a pot is practically the same as the care in any other circumstance, but it is important that you plant lavender in a large enough pot or container.

It is important the the pot is around 12-16 inches across as a pot this size has the capacity to contain enough soil for the lavender to establish its roots and access nutrients.

(Read my guide to the best pots for lavenders).

Pots that are too small can result in a lavender that is root bound and as lavender requires full sun, a smaller pot can heat up and dry out too quickly even for the drought resistant lavender.

I would also recommend to water ‘Phenomenal’ once every 2 weeks in Summer, when planted in pots and containers even if there has been some rainfall.