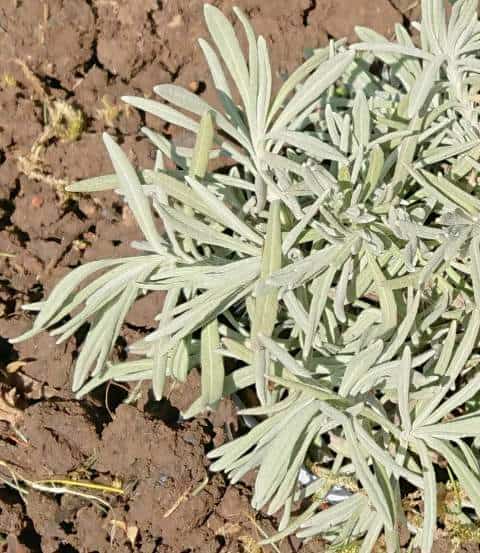 Lavenders leaves often curl up because they are planted in too much shade. Lavenders require 6 hours of sun per day (preferably full sun). If a lavender’s leaves curling up, this usually is a sign of stress due to a lack of light or fungal disease.

Other possible causes of leaves curling up are:

Do not resort to watering more frequently if lavender leaves curl up because of intense heat as leaf curl is an adaptation to living in arid regions and the lavender could be perfectly healthy.

The most common cause of lavender leaves curling downwards is as a result of the lavender located in an area without enough light.

Lavenders are native to countries in Southern Europe, such as Spain, Italy, France and Portugal where they grow in sandy soils with full sun and infrequent rainfall.

It is in these conditions that lavenders grow best, in terms of their foliage exuding the strongest aroma and displaying the most flowers. (Read my article for 7 methods of how to increase a lavenders blooms)

If lavenders are planted in the shade (less then 6 hours of sun per day) then the first sign of stress is their leaves curling up. Other signs that lavender do not recieve enough light are:

If your lavender is showing these signs of stress then you should either transplant the lavender to a sunnier location in your garden.

If this is not practical as you have limited space in your garden boarders then consider transferring the lavender to a pot which will give you more options for where to move the lavender for the most amount of sun.

According to commercial lavender growers, they see their best seasons harvest (oils for fragrance, flowers and potpourri etc.) on the hottest, driest, sunniest years with a good breeze.

The more shaded the lavender is, the leaves curl up and less flowers will be on display.

Place your lavender in full sun and the leaves should return to normal after a few sunny days.

Lavenders That are Indoors

Leaf curl on lavenders that are indoors is very common as it can be difficult to find a window sill in your house that sees full sun. The solution is to either move the lavender to the sunniest window or simply plant it outside.

Lavender ‘Anouk’ can adapt to indoor conditions better then most lavenders but in general lavender prefer to be outdoors, with full sun and an occasional breeze to reduce the risk of fungal disease.

The air in the house is often too still for lavenders and lots of people have a tendency to over water indoor lavenders which can also cause leaves to curl up or perhaps droop and turn brown (which is a sign of fungal infection).

(Read my article to learn how often to water lavenders).

Lavender leaves curling up due to under watering is rarely a problem although it can happen.

Lavenders are drought resistant and thrive in sandy soils growing in hot countries with blazing sunshine for many hours of the day and thrive even with infrequent rainfall.

Therefore there are more problems with over watering lavender rather then under watering (established lavenders rarely require watering in temperate climates).

However under watering lavenders can be a problem if there has been no rainfall or watering for more then two weeks, very hot weather and the lavender is planted in a pot or container that is too small or made of a material that heats quickly such as metal.

Plant lavender in pots or containers that are 12-16 inches across so that the pot has enough soil capacity for the roots to establish properly so they can access water and nutrients.

Avoid using pots such as metal or plastic as they are conductors of heat which on sunny days, heats up the soil and increases evaporation which dries out the pot much quicker.

The best material pots for growing lavender are clay, terracotta and ceramic pots with drainage holes in the base.

(Read my article choosing the best pot for lavenders).

Lavenders are drought resistant plants that thrive in hot and dry conditions.

However if it is an especially hot day with blazing sunshine and high temperatures then lavenders can appear to somewhat wilt with their leaves curled up.

This is not necessarily a sign of stress as lavender grow to their best in hot and dry weather but it is an adaptation for when it is the hottest days of the year and it is perfectly normal for this to happen.

If you look back at the lavender later in the day or perhaps in the cool evening, the leaves will no longer be curled and the plant will look as normal.

Do not be tempted to water the lavender more frequently as a result of leaves curling up due to hot weather as lavender only require watering infrequently, if at all in temperate climates.

In arid climates such as southern California or Southern Eruope water lavender every two weeks during the growing season.

(Read my article for how to water lavender in hot weather).

Lavender require the soil to dry out between bouts of watering, therefore watering too frequently will harm your lavender.

Lavender Leaves Curling due to Disease

It is possible that the lavender leaves curl up due to fungal disease. If lavenders are well cared for then the risk of disease is low.

However lavenders that are over watered, planted in slow draining soils or in humid climates can curl up as a sign of stress due to fungal disease.

Usually this will be in conjuction with other signs such as:

If this is the case then the lavender is suffering from a fungal disease because of the soil being consistently damp.

Lavender require well draining, sandy soils that does no retain water which are the conditions they have adapted to in their native environment.

Rich or clay soils, or watering too frequently will cause damp soil and promote the conditions for fungal diseases that affect lavender.

It is far more likely that your lavender leaves are curling due to over watering then under watering due to lavenders drought resistance and intolerance of damp soils.

Plant lavender in well draining sandy soil. If your garden soil has significant amounts of clay then consider planting lavenders in pots so you can control the soil profile to ensure it is well draining (it is very difficult to amend clay soils for lavender growing).

Amend the soil with around one third sand and two thirds potting soil or compost to recreate the optimal soil conditions for lavender and reduce watering to a minimum (only water if there has been hot weather and no significant rainfall for two weeks).

To revive a lavender that is suffering from fungal disease, it is important to lift the lavender out of the ground to inspect the roots for signs of infection (soft, rotten looking roots).

Snip away any infected, roots, leaves and stems with a pair of sterilised pruners to prevent the spread of infection and replant the lavender in new, well draining soil, in a pot or container and treat the soil with an organic fungicide.

To learn more read articles with more detail, and step by step, exactly how to save lavenders that are suffering from fungal disease.

Lavender can recover from disease if you treat the disease as soon as possible.

(Read my article to learn how to create the ideal soil mix for lavenders).