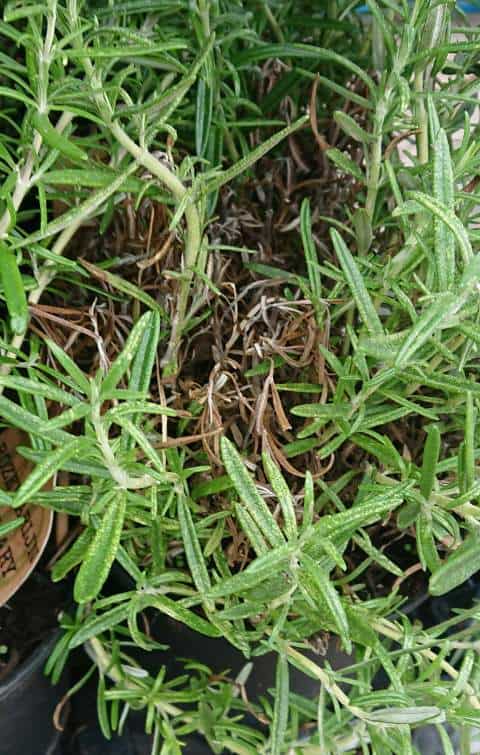 Rosemary can grow very well in pots due to the favourable drainage conditions. However if your potted rosemary is drying out, then this is often as a result of too much much moisture around the roots rather then not enough watering.

The reason for potted rosemary drying out is usually because of root rot or fungal disease due to soil being too damp rather then under watering (rosemary requires well draining soil) which causes the rosemary to wilt and have a dried out appearance.

Causes of Potted Rosemary Drying Out

Rosemary is a herb native to Southern France, where it thrives in the Mediterranean environment of blazing sunshine, sandy, well draining soils and infrequent rainfall.

For potted rosemary to thrive, the soil around the roots must be allowed dry out somewhat between bouts of watering, replicating the growing conditions of the Mediterranean.

If the soil around the roots is persistently damp then rosemary can quickly develop root rot or the fungal disease ‘Botrytis‘.

The symptoms of root rot and fungal disease are:

It may sound counter intuitive that a potted rosemary appears to be drying out, because of too much water but rosemary is sensitive to over watering and prefers soils well draining soils that do not retain water.

It should be noted that over watering is not the only factor which can cause excessive moisture around the roots that leads to root rot. Other risk factors are:

It is easy to mistake a potted rosemary that looks as though it is drying out, for a plant that requires more water. Gardeners then might increase watering which compounds the problem and exacerbates the conditions that result in root rot.

Rosemary is a drought resistant plant (when established) so it does not often suffer from stress due to a lack of watering.

However if the rosemary pot is too small then the pot can heat up in full sun and dry put before the roots of the rosemary have a chance to uptake water.

A dehydrated rosemary, however tends not to look dried out but rather droops somewhat in appearance and will respond well to watering.

Plant rosemary in a relatively large pot, around 12-16 inches across to ensure that there is enough space for the roots to establish and draw up moisture when required.

Pots Without Drainage and Drip Trays

Rosemary roots prefer the soil to be somewhat dry between bouts of watering, so if the rosemary is planted in a decorative pot without proper drainage, the pot will collect water and the soil will be saturated.

This will quickly lead to root rot which turns the rosemary leaves and stems brown with a drooping appearance and the plant looks as though it is drying out.

If you are growing rosemary indoors and you are using a drip tray to catch the excess water that can trickle out of the base of the pot after watering, this has the same effect as planting the rosemary in a pot without drainage holes.

Even with just a little bit of water in the bottom of the drip tray can prevent the soil drying out properly which can lead to damp soil and increase the risk of root rot or fungal disease which turns the rosemary brown and gives it the dried up, brittle appearance.

To prevent this from happening:

Over Watering Rosemary in Pots

Thanks it its Mediterranean heritage, rosemary plants are drought resistant when established and only require watering once every 2 weeks and perhaps once a week in hot weather.

If you water rosemary too frequently (whether its in a pot or in garden soil) the soil will be consistently damp around the roots which causes the root rot or fungal disease that causes the rosemary to have the dried out appearance.

Due to its tolerance of drought and water sensitivity, more problems are caused because of over watering rosemary then under watering.

However it is important to plant rosemary in a pot that is roughly 12-16 inches across as smaller pots heat up too quickly in the blazing sunshine and they can dry out too quickly for the roots to uptake the water effectively.

The only time rosemary tends to suffer from under watering is when the pot is too small, and made from metal or plastic (which conducts heat more effectively then materials such as clay or terracotta).

If the newer growth of the rosemary is drooping then this is a sign that it may not have enough water but this only tends to happen to to rosemary in small pots or houseplants that have been completely neglected rather then pots that are outdoors.

Use a Well Draining Potting Mix for Rosemary

One of the best ways to prevent rosemary from the affects of fungal disease which causes the rosemary to have a dried up and brittle appearance is to provide the plant with the optimal soil mix.

Rosemary is a hardy plant that can grow in acidic, neutral and alkaline soils. However it is particularly important that the soil is well draining.

Rosemary thrives on hillsides and by coastal locations in the South of France where it grows in sandy or stony soils which have low to medium nutrients and are well draining.

It is in these soil conditions that rosemary grows its best in terms of the health of the plant, and the aroma and bold flavour of the leaves.

Pots already provide some favourable drainage characteristics (similar to the hillsides of rosemary native environment) but it is imperative that you replicate the sandy soil by adding some horticultural sand, grit or perlite to the potting mix so that the soil is well draining and does not retain too much moisture or nutrients.

Add roughly 20% sand or grit to 80% potting soil or compost to a pot. Ensure that you use a regular multi purpose compost that does not have moisture retaining agents or added fertilizer as this is contrary to the preferred soil conditions.

Adding the sand or grit to the potting mix ensures that the soil drains quickly with a porous texture that allows the roots to establish and for root respiration.

With a well draining potting mix the roots can stay dry between bouts of watering which reduces the chance of root rot that causes the rosemary to have a drying out appearance.