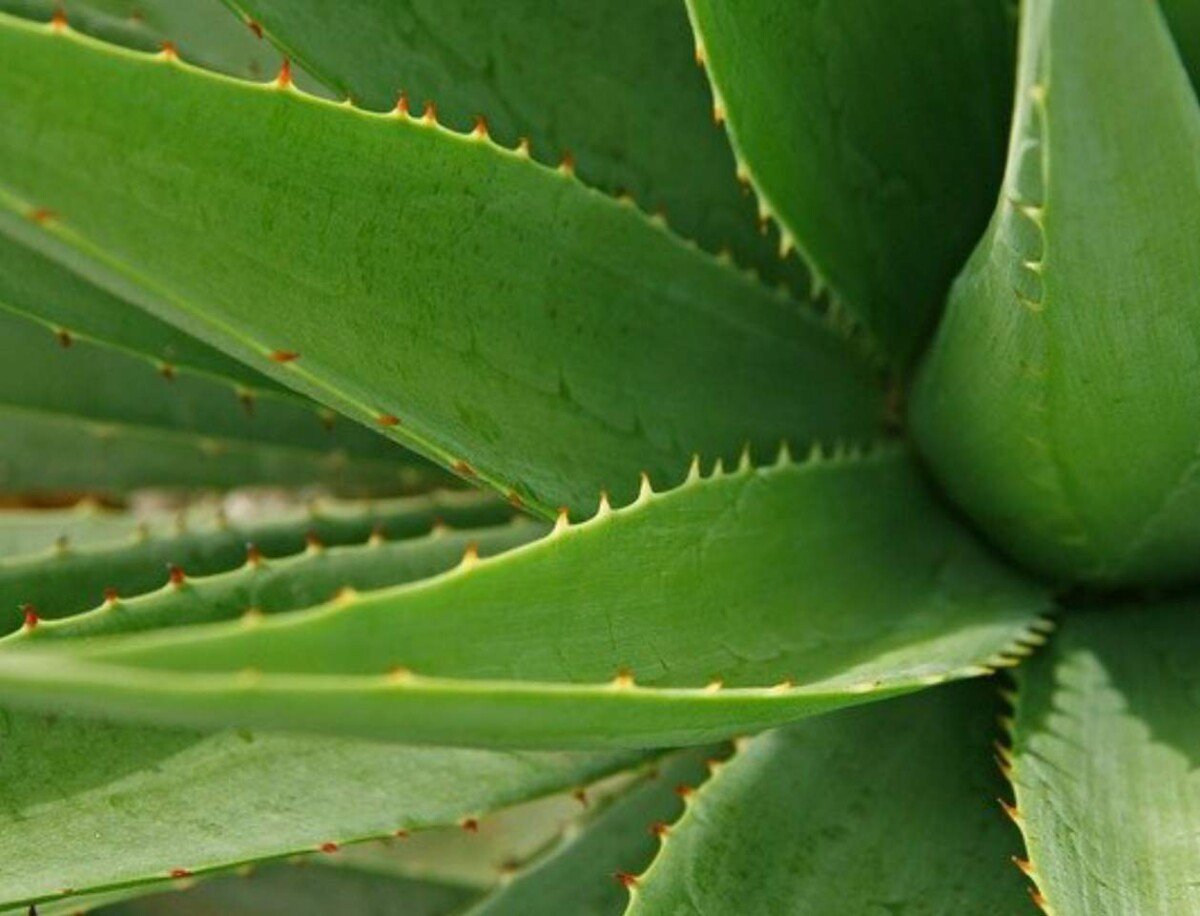 The reason for aloe vera leaves are curling is because of drought stress. Aloe vera stores water in its leaves. If the aloe is not watered often enough or watered too lightly, then aloe vera consumes the moisture stored in its leaves to survive which causes them to curl inwards.

Aloe vera leaves curling is a common problem as people interpret the advice that ‘aloe vera does not need much water‘ to mean that they should be watered with a small quantity of water when actually aloe vera require less frequent watering then most plants but should always be watered with a generous soak.

A generous soak ensures enough water infiltrates the soil to reach the roots, however the aloe prefers the soil to dry out between bouts of watering to replicate the watering cycle of their native desert habitat.

Aloe leaves also curl up due to the soil not absorbing water properly and because of certain environmental factors can cause them to dry out too quickly.

(Note that leaves can droop rather the curl due to over watering and lack of light, in which case read my article how to revive a dying aloe vera for the solutions).

Aloe vera are succulents that store water in their leaves as a survival strategy for growing in climates of infrequent rainfall, gritty well draining soils and high temperatures in their native range of Oman in the Arabian peninsula.

When aloe is suffering from drought stress the leaves start to curl inward, become thinner and concave as they plant depletes its remaining stored water.

This is in contrast to a healthy aloe vera leaf which should look thick, plump and fleshy which indicates the optimal amount of watering.

There are several reasons for drought stress that can cause your aloe vera leaves to curl inwards:

How To Revive Aloe Vera with Curling Leaves

Whilst aloes do not require watering as frequently as other plants it is essential that they are watered with a really generous soak, so that the moisture can infiltrate the soil and reach the roots.

A good soak also encourages the roots to grow and establish in the soil which further increases the aloe vera’s resistance to drought.

If you water too lightly only the top inch or so of the soil becomes moist and the moist does not soak down and reach the roots where it is required causing the leaves to curl inward.

Always water aloe vera with a generous quantity so that water visibly trickles out the base of the pot.

This ensures the water has reached the roots so that they can uptake the moisture they require so that the leaves return to normal after 2 or 3 cycles of watering.

There is no universal instruction for how often to water aloe as it depends on many variables such as climate, sunlight and humidity.

How often you should water your aloe vera is dependent on the rate at which the soil dries out.

To establish how often to water you aloe according to your climate, give the soil a good soak and then monitor the soils moisture.

To test the soil moisture, feel the soil through the drainage hole in the base at the bottom of the pot.

If the soil is moist then delay water for a few days. If they soil feels dry then this is the perfect time for watering.

This cycle of a good soak followed by soil that dries out replicates the conditions of the aloe vera’s native environment, with a down pour of rain followed by a period of drought and keeps the leaves plump and healthy whilst also avoiding root rot.

Typically watering once about every 2 weeks is appropriate for most climates but the demand for water can fluctuate as aloe vera can be dormant at certain times of the year.

(For exactly how often and how much to water your aloe vera in Summer and Winter read my article how to water aloe vera plants).

To remedy the drought stress as effectively as possible place the aloe vera pot into a basin of water for 10 minutes to allow the parched soil to soak up the water so that the roots get a good drink and a head start for the curl leaves to recover.

Sometimes gardeners diligently follow the correct best practices of watering their aloe plants and yet the leaves still curl due to drought stress.

This is usually because the aloe is planted in potting soil that contains peat which turns hydrophobic (repels water) when it dries out.

When the soil dries out between bouts of watering (which it should between watering aloe vera) certain potting soils can bake to a hard texture which prevents water from infiltrating the soil and reaching the roots of your aloe vera.

The water then runs off the surface of the soil and down the side of the pot and tickles out the base of the pot.

This can give the impression that you aloe vera is well watered when in reality the soil around the roots remains dry.

The water repellent soil then causes a period of extended drought, despite watering and causes the leaves of your aloe vera to curl inwards and turn thin rather the thick and plump.

How to Solve it…

If your soil is water repellent and contains peat then you should repot your aloe vera in a well draining soil mix.

Re-pot your aloe in a special succulent and cactus potting mix (available from garden centers and on Amazon) which is specifically formulated to emulate the well draining soil characteristics of the aloe vera’s native environment.

A succulent soil mix contains more grit and sand which improves drainage and importantly, it retains a porous structure that allows water to infiltrate the soil even when its dried out.

Succulent soil mix helps to maintain the optimal balance of moisture so that water reaches the roots yet drains quickly enough to prevent root rot which is a common problem for aloe vera.

This allows the water to reach your aloes root to provide some much needed hydration for the curled in leaves.

The aloe can recover with or 2 or 3 cycles of watering and regain there healthy plump leaves.

Whilst the leaves of aloe vera can curl whether they are indoors or outdoors, there are several factors for aloe vera indoors that can increase the rate at which the plant dries out.

Air con and forced air create air currents in your home and can increase the temperature significantly at night which is usually when temperatures cool in the aloes native habitat.

This can sap water from the leaves of the aloe at a quicker rate then the roots normally uptake water to maintain the optimal balance of moisture and cause the leaves to curl inwards as a result.

Also because of lower humidity indoors, the potting soil dries out at a much quicker rate typically then it does outdoors.

However I must emphasize that generic watering advice is not helpful as the rate at which aloe vera dries out (so that the leaves curl) can depend on so many factors.

Always use the method of monitoring soil moisture by feeling the soil through the drainage holes to establish when the soil has dried out form its last bout of watering before watering your aloe again.

With the optimal watering frequency the aloes leaves can recover for their curled up appearance in the following weeks.

(Read my article, how to tell if your aloe plant is overwatered or underwatered).

If your outdoor aloe vera leaves are curling inwards then this is most likely due to higher levels of sun exposure and perhaps wind that is drying out your aloe vera.

Try to find a more sheltered location for your aloe to prevent excess wind sapping moisture from the leaves.

Aloe prefer around 4-6 hours of morning sun followed by bright indirect light in the afternoon.

If your aloe is in full sun then it can dry out much quicker causing the leaves to curl inwards.

Increase the frequency of your watering to suit your climate and always water with a generous soak and the leaves can recover.

However you should only water when the soil is dry to avoid problems with root rot.

(If your aloe vera is growing slowly read my article why is my aloe vera plant not growing?)