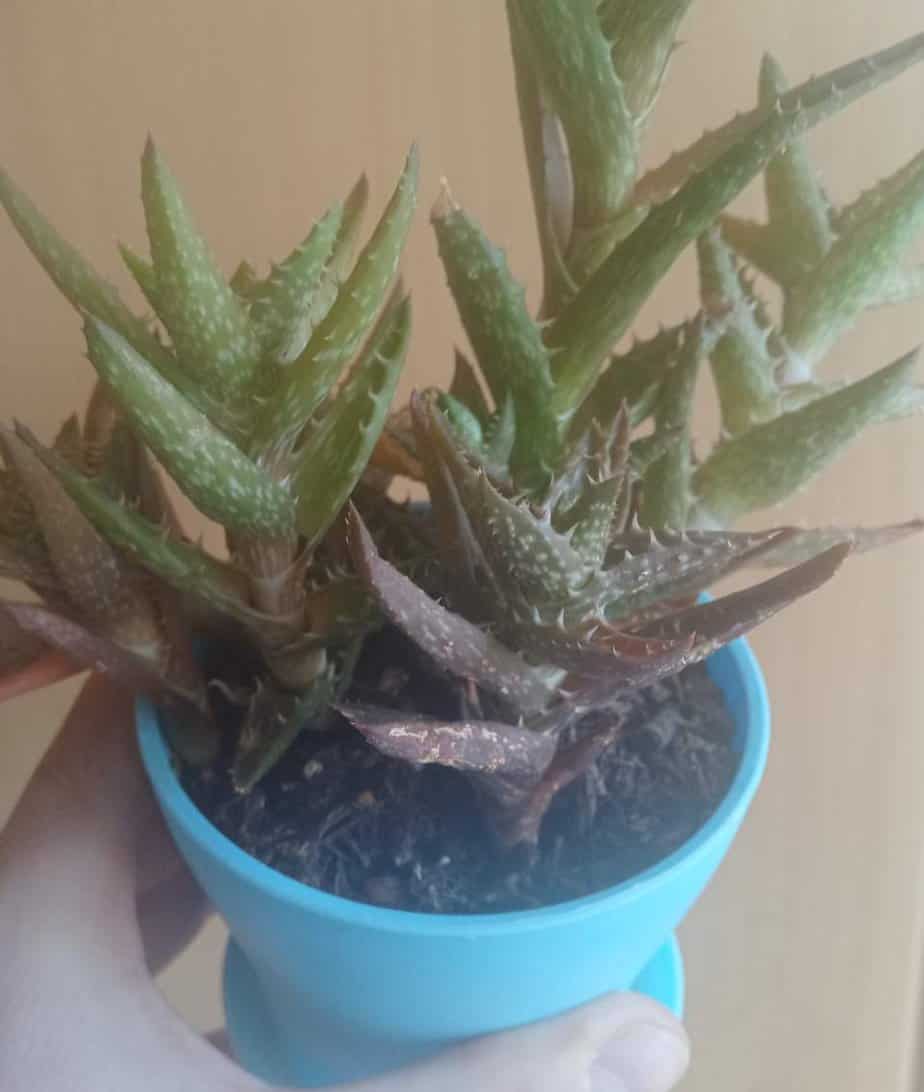 Aloe plants are succulents that store moisture in their leaves which is why the leaves shrink in size if the plant is underwatered.

However aloe plants are adapted to tolerate drought and cope much better with underwatering then overwatering.

How to Tell If the Aloe Plant is Overwatered

If an aloe plant is overwatered, the leaves turn yellow or brown and have a soft mushy texture and a drooping appearance. The roots turn brown and die back with a rotting appearance and an unpleasant smell.

Aloe plants are native to the Arabian peninsula and grow in well draining, gritty soils with infrequent rainfall.

(Aloe plants can turn brown for a few other reasons, such as sun burn. Read my article, why is my aloe turning brown).

Overwatering and plant aloes in slow draining soils is by far the most common mistake when caring for aloe plants.

Aloe plants thrive when they are given a thorough watering followed by a period of dry for about two weeks, as this replicates the -deluge of rain followed by period of drought- cycle of watering they typically experience in their native environment.

Aloe plants draw up moisture from the potting soil after a good soak and then store the moisture in their leaves, which allows them to live in dry climates with well draining soils.

Aloe plants need the soil to dry out completely between bouts of watering, which typically means watering your aloe around every 2 weeks (Read my article, how to water aloe vera for how often to water aloe vera at different times of the year).

If you are watering an aloe plant more often then once a week then you are overwatering your aloe as this does not give the soil enough of a chance to dry out.

However, it is important to acknowledge that the right watering schedule has to be in conjunction with the right, well draining potting soil to avoid the symptoms of overwatering.

Aloe plants do not grow well in ordinary potting soil as it retains moisture for too long around the roots after watering which results in the symptoms of overwatering.

An aloe plant with mushy leaves is a warning of overwatering, but it may not necessarily mean that the plant has developed root rot, if you detect the problem quickly, before root rot can set in.

How to Fix an Overwatered Aloe Plant

To save an overwatered aloe plant, replicate the conditions of its native environment replacing the soil with well draining gritty succulent soil, only water the aloe when the potting soil has dried out and cut off any brown, mushy aloe leaves to prevent the rot from spreading.

Aloe plants can recover from overwatering, but if the root rot is too significant, then the only option is to propagate the aloe from any remaining healthy leaves.

Aloe plants are relatively easy to propagate and it may be the only way to save the overwatered plant. Watch this helpful YouTube video for how to propagate aloe plants from leaves.

How to Tell Whether an Aloe Plant is Underwatered

If an aloe plant is underwatered then the aloe shrinks in size with leaves becoming thinner and curl inwards as the aloe draws upon the moisture reserves in the leaves. The leaves also turn brown if they are severely underwatered.

Whilst aloe plants do not need to be watered as often as most houseplants, they should always be watered with a generous soak.

A common mistake with aloe plants is to misinterpret the advice that ‘succulents and aloe plants do not need much water’ to mean that they should only be watered lightly.

If you water the soil too lightly, then only the surface of the soil becomes moist and the watered does not infiltrate the potting soil and reach the aloe’s roots where it is required.

Aloes need the soil to be evenly moist so that the roots can draw upon the moisture they require, before allowing the soil to dry out. The moisture is then stored in the leaves which is why an healthy aloe plants leaves look full and feel plump.

The first sign of an underwatered aloe plant is that the leaves becomes thinner as the aloe draws upon is moisture resveves.

Fortunately this ability to store water is a part of the aloe’s survival strategy to cope with the hot and dry conditions of its native environment. Therefore the aloe usually copes well with being underwatered and recover fairly quickly.

It is important to note that the aloe’s soil can dry out much quicker if the pot is particularly small, which can lead to the symptoms of underwatering. Also high temperatures, intense sunlight and indoor heat can also cause the soil to dry out too quickly for the aloe’s roots to draw up enough moisture, which can result in an underwatered aloe.

How to Save an Underwatered Aloe Plant

To save an underwatered aloe plant, give the soil a generous soak,

The key to saving an underwatered aloe plant is to find out how quickly the aloe’s soil dries out. The rate at which the soil dries can vary depending on the maturity of the aloe plant, the size of the pot and the temperature of its environment.

The difference between an underwatered orchid and overwatered orchid is that the roots turn brown, with a rotting texture and a bad smell due to root rot, because of overwatering, whereas...