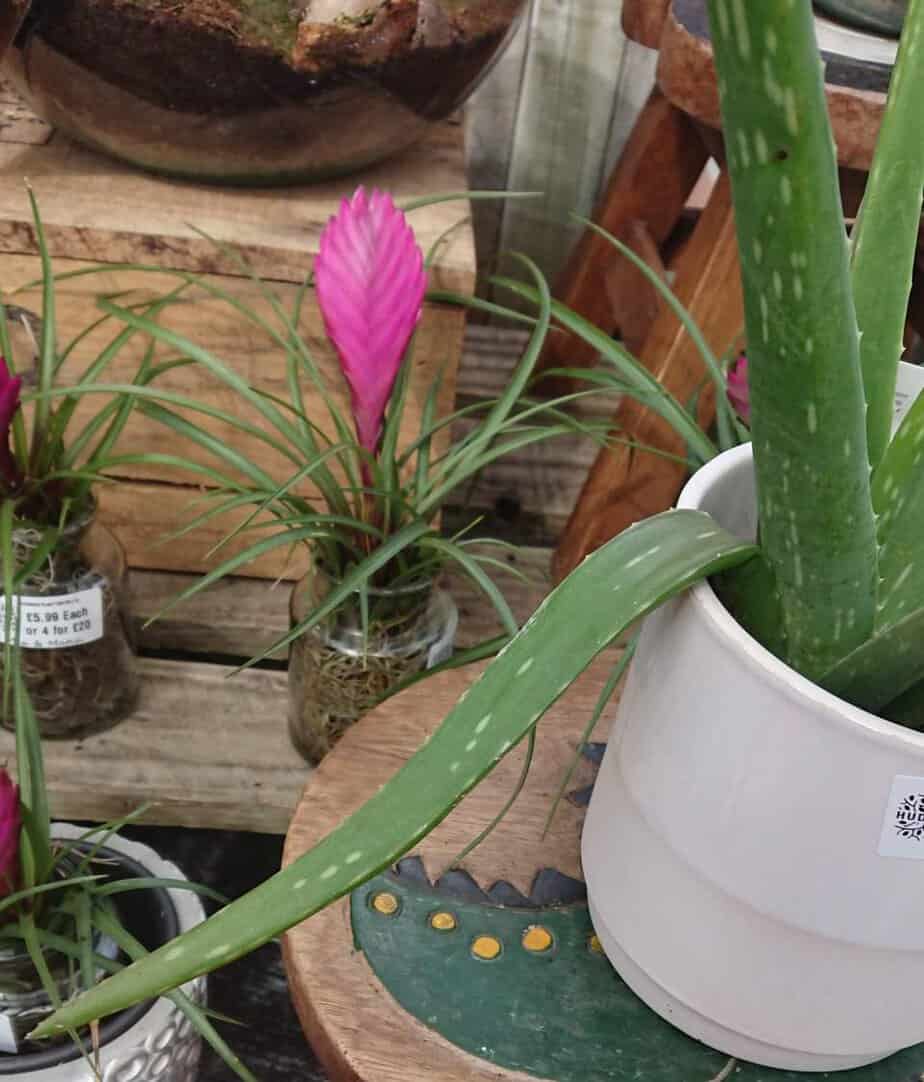 The reason for aloe plants with drooping leaves is usually because the aloe is into too much shade. Aloe plants need bright light with some direct sunlight. Aloe plant leaves turn brown and droop due to root rot as a result of overwatering and slow draining soils.

Aloe plant leaves can droop after repotting, if they repotted into a much larger pot, as larger pots retains more moisture. Aloe plants require the soil to dry out between each watering to avoid drooping leaves.

To save an aloe plant with drooping leaves, move the aloe in an area with more sunlight, repot in a pot that is proportional to the size of the aloe plant, with well draining soil and prune back any drooping leaves that turn brown and mushy.

The most common reason for aloe plant leaves drooping is because of a lack of sunlight. Aloe plants are adapted to grow in bright light with some direct sunlight. If the aloe is in too much shade the leaves grow long and droopy in search of more light which causes the leaves to grow weak and droop, under their own weight.

Aloe plants are native to hot and dry climates in Africa and the Arabian peninsula where they are adapted to growing in bright light with ideally 6 hours direct sunlight and high temperatures with infrequent rainfall and well draining soils.

Therefore aloe plants should always be grown in bright light with some direct sunlight when grown indoors or outdoors to replicate the conditions of the aloe plants native environment.

Aloe plants stay smaller, more compact and healthier with thick, stronger leaves if they are grown in more sunlight.

If your aloe plant is not grown on a window sill with bright sunlight, but instead is grown in relative shade then the aloe prioritizes is energy to growing the leaves towards the strongest sources of light, which results in a leggy appearance with weak drooping leaves, that eventually droop down under their own weight.

Aloe Plants also can droop if they are not turned regularly. Aloe plants grow in the direction of the strongest source of light, which can cause them to grow lopsided and topple or droop to one side.

How to Save a Drooping Aloe Plant

Typically if the aloe is drooping because has been slightly too shaded, then locating the aloe in a bright area can help to revive the plant and it can largely restore is appearance.

However. if the aloe has been in the shade for too long and some of the individual leaves are particularly drooping, then these leaves do not stand up again properly, regardless of how much sunlight they have.

If it has been more then a few weeks during active growth (Spring and Summer) and the leaves are still still drooping, I recommend cutting the individual drooping leaves back with a sharp pair of pruners back the base of the plant.

The point at which the aloe has been cut should callous over in 2 days and the aloe can now prioritize is energy to growing new leaves and supporting the healthy leaves that are not drooping.

If all the leaves are drooping I recommend taking cuttings of the leaves or offshoots for propagation. The drooping leaves can propagate very easily which should give a healthy non drooping plant.

Watch this helpful YouTube video for how to propagate aloe vera plants from off shoots cuttings:

The reason for aloe plants drooping and turning brown is usually because of overwatering and slow draining soils. Aloe plants are adapted to gritty, well draining soils and infrequent rainfall in their native environment. If the potting soil is too damp from overwatering or poor drainage, the aloe leaves droop and turn brown.

Aloe plants are adapted to drought conditions growing naturally in gritty soils that do not retain much moisture and drain relatively quickly, with a -deluge of rainfall followed by a period of drought- cycle of watering.

For this reason, the aloe plants are far more sensitive to overwatering and damp soil then most plants.

To keep aloe plants healthy it is important to recreate these conditions of the aloe natural habitat with well draining potting soil and watering, only when the soil is dry.

A common mistake is to plant aloe plants in ordinary potting soil which retains too much moisture and to water the aloe too often.

Damp conditions around the aloe’s roots causes sections of the aloe plant to turn brown and mushy, whilst drooping.

(If you are unsure, read my article, how to tell whether my aloe plant is over or underwatered).

Consider that damp soil can also be caused by pots without drainage holes in the base or due to not emptying saucers, trays and decorative outer pots of excess water.

Cold temperatures below 50°F are unfavorable for aloe plants can also increase the risk of root rot and contribute to aloe leaves turning mushy and drooping.

How to Save a Droopy Brown Aloe Plant

Aloe plants are a lot more hardy then most people think and can tolerate a big leaf being cut back without a problem, particularly if the aloe leaf is drooping, brown, soft and rotten. You can cut the leaf all the way back to the base of the plant or back to healthy firm growth.

New leaves should emerge during active growth (Spring and Summer).

If significant parts of the aloe plant are drooping and brown and the aloe does not appear to get any better I recommend propagating the aloe leaf from a cutting to save the plant.

(Read my article, why is my aloe plant dying?).

Aloe plants are drought resistant and grow naturally in gritty, well draining, porous soil that does not retain much moisture and allows oxygen around the roots for respiration.

If the potting soil is firmed around the aloe’s roots when it is repotted, then it could be too compacted for the aloe to tolerate, which restricts the amount of oxygen in the soil and slows down the rate at which the soil drains after watering, both of which are unfavorable for the aloe plant and can cause the leaves to droop.

Aloe plants should also only be repotted into pots that are one size up from the previous pot.

Water pooling in the base of the pot due to a lack of drainage holes or saucers, trays and decorative outer pots also causes root rot which causes the aloe’s leaves turn turn brown and droop.

How to Save a Drooping Aloe Plant After Repotting

Once you have repotted the aloe plant to the right pot, with well draining soil, and you have established the optimal watering frequency for the new conditions, then the aloe plant should show signs of recovery in the next few weeks.

If the aloe leaves continue to droop and develop brown, mushy areas, then consider propagating the aloe’s leaves from cuttings or any off setts as brown mushy areas indicate root rot.

(Read my article, how to revive a dying aloe vera plant).

To increase the amount of hibiscus flowers, ensure the hibiscus is planted in full sun and water generously in the Spring whilst the flower buds are developing. Hibiscus displays its flowers on new...

The reason for orchid stems turning yellow and dying is because the stem (or flower spike) naturally turns yellow and brown and dies back after it has displayed flowers. A yellowing stem does not...