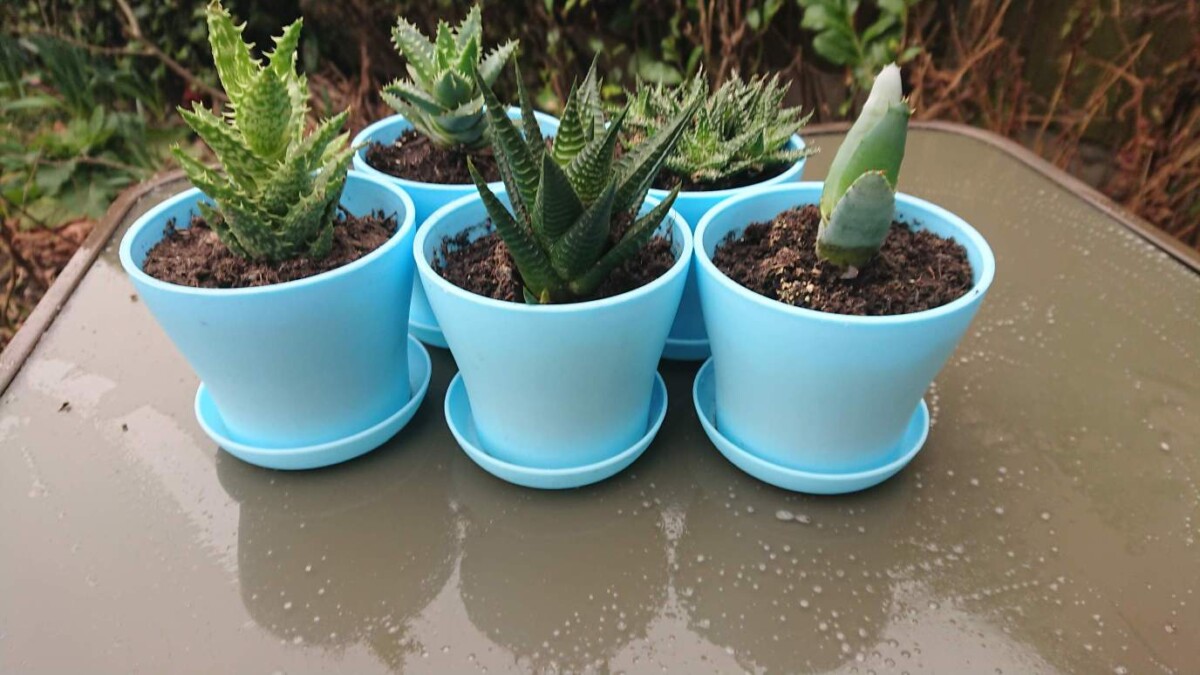 The reason for a dying aloe plant is often over watering or slow draining soil which turns the leaves brown or yellow with a dying appearance. Not enough sun and temperatures colder then 50°F can also be the cause of a dying aloe plant.

The most common reasons for aloe plants dying back:

In this article I have listed the 5 most common reasons aloe plants die or appear to be dying and the solution to each problem.

By far the most common reason for aloe plants dying is due to over watering.

Aloes are drought resistant plants that grow in the sunny, hot and dry climate of Oman in the Arabian peninsula where they grow in relatively gritty or sandy well draining soils with low humidity read my article on the best potting soil for aloe vera).

If aloe plants are watered too often then it shows symptoms such as the leaves turning yellow or brown with the aloe leaves drooping.

Consistently over watered aloe plants can develop root rot if but if you can save aloe with brown and yellow leaves before root rot develops.

As aloe plants are so well adapted to drought conditions over watering is almost always the problem rather then under watering.

If you are watering aloe more then once per week you are over watering your aloe plants.

It is important to scale back the watering of your aloe immediately to let the soil dry out.

To grow aloe plants successfully it is important to recreate the watering conditions of its native habitat. This means watering your aloe plants with a generous soak followed by a period of drought where the soil dries completely.

To establish how often to water aloe plants, give the soil a good soak and then check to see how long it takes for the soil to dry out at the bottom of the pot.

The best way to do this is to feel the soil at the bottom through drainage hole in the base of the pot.

If the soil still feels moist or damp, then delay watering for a few day, if the soil feels dry then this is the perfect time for watering.

Often scaling back the watering and letting the soil dry out (and replacing the soil if it retains too much moisture) and removing the affected leaves is all it takes to save your dying aloe plant.

However if the aloe is getting progressively worse with more yellow leaves with a mushy texture and a drooping appearance then check your aloe for root rot.

Healthy aloe roots should look lighter in color, if your roots look like this, the aloe should not have root rot…

The large white root in the photo is used to store water as a survival strategy for drought. The other roots on this aloe are healthy and without root rot but are somewhat discolored to a light brown because of the potting soil rather then disease.

However if your aloe roots are dark brown such as some of the root in this photo, then the aloe plant could well have root rot.

Any plant with root rot can be very difficult to save but in the case of aloe plants I recommend taking cuttings from any healthy leaves for propagation.

Aloe plants are very easy to propagate from leaf cuttings and this is often the only way to save an over watered dying aloe plant. Watch this YouTube video for how to propagate aloe plants:

2. The Soil Drains Too Slowly

Aloe plants grow in soils that is very gritty, porous and well draining in their native environment.

Conventional potting soil retains moisture around the roots of your aloe plant too long for it to tolerate and the aloe can develop the same symptoms of over watering such as leaves turning yellow or brown with a mushy texture and a drooping appearance.

If the aloe is in slow draining or damp soil, for too long it can develop root rot and die back.

Aloe plants should be planted in specially formulated succulent soil (available from garden centers and amazon) as this replicates the well draining soil soil profile of its native environment.

If your aloe is in conventional potting soil that does not dry out completely in two weeks after watering then you should replace the soil to save your aloe.

Take your aloe plant out of the pot and gently remove the potting soil, avoiding damage to the roots.

Ideally use a new pot or wash the old pot thoroughly using disinfectant which kills any fungal disease pathogens.

Replant your aloe in the new soil in the clean pot.

Remove any brown or yellow leaves to prevent rot from spreading and implement a good watering schedule ensuring that the soil dries out between bouts of watering to mimic the moisture cycle of the aloes native environment.

The aloe can fully recover if you remove the soil damp soil and replace it with specially formulated succulent soil before it develops of root rot.

A common cause of aloe plants dying is because of the use of trays and saucers (or decorative pots) underneath the pot of your aloe plant that causes water to pool around the base of your plant and cause signs of stress such as leaves turning brown or yellow, the same as over watering or slow draining soils.

Saucers and trays are useful for preventing excess water from spilling in the home after a bout of watering.

However they should be emptied regularly or the soil around the roots can be become saturated which is contrary to the preferred conditions of this drought tolerant plant.

Ensure that your aloe plant is in a pot with drainage holes and that the soil can dry out properly by emptying any excess moisture from their saucers or trays to keep the plant healthy.

(Read my article on choosing the best pots for growing aloe vera plants).

If they are in too much shade then the aloe leaves often droops down, turn pale and grow leggy as it searches for more light.

An aloe plant that is sun deprived, redirects its energy to growing the younger leaves towards the direct of strongest light or towards the sun.

This causes the older outer leaves to turn brown, dried out whilst dying back and falling off.

Aloe should be located in an area of direct sun for at least 4 hours to maintain a compact shape rather then a leggy appearance.

How easy it is to save your aloe depends on how long it has been in too much shade.

Once the leaves have drooped down significantly under their own weight, they do not stand up again in response to more sun.

To improve the appearance of your aloe plant, cut these individual drooping leaves back to the base so that only upright leaves remain.

Moving the aloe plant aloe of a sudden to more sun causes the leaves to turn brown due to sun burn so a moving the aloe for more time in direct sun each day allows the plant to acclimate without burning.

If all the leaves are drooping and the outer leaves have died back extensively then the best option is to take cutting of the healthiest looking leaves for propagation as the leaves do not stand back up once they are severely weakened.

Aloe plants are not cold hardy and can die if they are exposed to temperatures lower then 50°F (10°C) for long periods of time.

Temperatures higher or lower then this range and some aloe plants go into a state of dormancy as a survival strategy to cope with low light and cool temperature in Winter or excess heat and drought in Summer.

In most cases there is only certain parts of the leaves of the aloe plant turn soft and mushy.

Move the aloe plant to an area that is between 55°F-80°F (13°C-27°C) consistently and ensure that none of the leaves are in contact with a cold window or in a cold air current.

If the leaves feel mushy then wait for several days if not weeks for the mushy, cold damaged part of the plant to dry out somewhat and it should form a callus.

Once the mushy part of the leaf has dried up cut the leaf back to below the damaged part as most often the specific cold damaged areas do not recover.

Only resume watering the aloe when the callus of the leaf cut has healed over to prevent other potential problems.

It requires some delayed gratification but the aloe plant can eventually grow new leaves and start to recover a normal appearance after cold damage.

link to How to Revive a Dying Hibiscus

Hibiscus are tropical plants that thrive in full sun, moist soil, with consistent warm temperatures. higher humidity and away from wind or draughts. The reason for a hibiscus dying is usually dry...

Continue Reading
link to How to Water Petunias