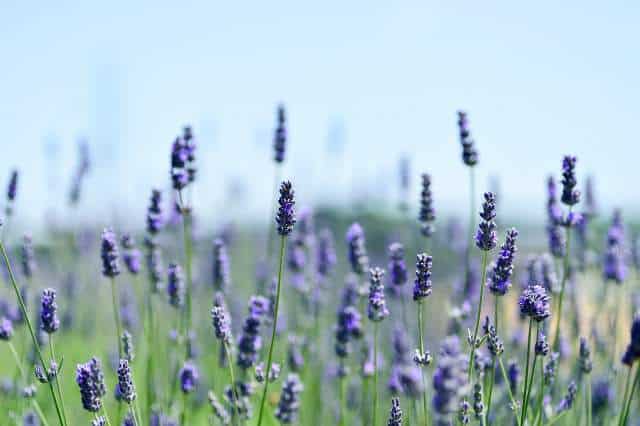 English lavenders are the easiest lavenders to grow, with varieties such as ‘Munstead’ and ‘Hidcote’ regarded as the easiest and most versatile lavender varieties as they require minimal maintenance and can survive in both hot and cold climates.

There is also no compromise in terms of aroma as these lavenders are grown commercially for their oil and fragrant foliage.

English lavenders are the easiest to grow because:

It should be noted that all lavenders require full sun and generally do not grow well in humid climates.

The Easiest Lavender Varieties to Grow

The easiest lavender varities to grow that I would recommend are the English lavenders:

These lavenders varieties are the most widely available and are highly regarded by gardeners and commercial growers for their fragrance and because once you have the right conditions they are exceptionally easy to grow.

This is generally true for most English varieties of lavender which are all far more cold hardy and versatile then the French, Spanish and Portuguese lavender varieties which tend to require a little more maintenance especially in Winter when they may need to be taken indoors for protection from the cold.

Other good alternatives for easy to grow lavender include:

These lavenders have been cultivated to have the best of both worlds in terms of the cold hardiness of the English lavenders (USDA zones 5-9) and the longer flowering seasons of the French and Portuguese lavenders.

For the full care guide read my articles on Lavender ‘Hidcote’ and Lavender ‘Munstead’.

Why English lavenders are The Easiest to Grow

English lavenders (lavandula angustifolia) ‘Hidcote’ and ‘Munstead’ only require pruning once per year which takes less the 5 minutes to do.

Pruning is simply a case of removing the top third of the lavenders flexible growth (whilst not cutting into the woody base of the plant) and aiming for a mound shaped plant as this is the best shape to help resist weather damage.

Pruning also increases the life span of lavender and stimulates new growth that will support flowers (lavender only blooms on new seasons growth).

For a quick visual guide to pruning watch this YouTube video:

No Need for Fertilizer

Lavender of all species prefer low fertility soil as they are adapted to the nutrient poor, sandy soil of the Mediterranean. Adding fertilizer will result in excessive foliage growth at the expense of flowers, with leggy growth and foliage that does not exude as much fragrance.

Instead amend the soil with around 1/3 of sand or grit and 2/3 compost by volume. This will help to replicate the low to medium fertility conditions of the coastal Mediterranean region where lavenders thrive.

Sand or grit is also crucial as it increases the drainage of the soil which is appropriate for lavenders as they require dry soil that does not hold moisture, to avoid problems such as root rot.

Read my article for how to create the optimal soil mix for lavenders.

English lavenders are the only lavender species that can tolerate cold climates with higher levels of rainfall (as long as the soil has been amended with sand or grit to increase the rate of drainage).

Whereas English lavenders are cold tolerant and can endure freezing temperatures, snow and ice during Winter as long as they are in soil with good drainage and in full sun. English lavenders are hardy in USDA zones 5-11 with ‘Munstead’ and ‘Hidcote’ ranking amongst the hardiest varieties.

Water Only During Droughts

Once lavenders have become established they often attain all the moisture they require from the environment without additional watering, this is particularly the case in temperate climates.

Lavenders of all species originate in the dry and hot regions of Southern Europe where they receive infrequent rainfall and yet thrive and produce the strongest scent and the most flowers.

Lavenders typically only require watering in the Summer during times of drought, where there has been no significant rainfall for more then two weeks.

However it should be noted that lavenders should be watered frequently after planting whilst their root system establishes in their new environment.

To learn about watering lavender in different conditions, read my article how often to water lavender.

This applies to all lavenders as pots and raised beds often provide favourable drainage conditions and they have the benefit of being able to control the soil profile much easier then to amend soil in garden boarders.

Therefore pots, containers and raised beds can provide an easy alternative to planting lavender into garden soil if your garden soil is less appropriate for lavender growing and would require significant amending which tends to be labour intensive.

For example if your soil is slow draining or particularly acidic (lavenders require soil to be between pH 6.5 and 8 which ranges from mild acidity to alkaline conditions) then amending the soil is possible but requires more maintenance.

Pots and raised beds can also increase the airflow amongst the lavenders foliage compared to garden boarders which helps reduce the risk of fungal disease.

English lavenders can grow outdoors all year round in pots and raised beds whereas the more tender French and Spanish lavender will need to be brought indoors to protect them from the frost which is inconvenient in terms of finding enough space.

Read my guide for choosing the right pot for growing lavenders.

There are very few pests and diseases that affect English lavenders as they are both:

…and fortunately lavenders are not often troubled by disease. The most common problems that tends to be the fungal disease (phytophthora) root rot which is usually preventable by following the right watering guidelines and ensuring that you plant your lavender in a well draining soil mix.

Lavenders also require full sun to produce the strongest fragrance and the most blooms. Lavenders in partial shade either grow leggy or do not live very long.

All lavenders do not tolerate humid climates very well as they are adapted to breezy coastal conditions in dry climates. Planting lavenders in raised beds or pots can help increase the airflow compared to lavender planted in garden boarders.

Lives longer then other Lavenders Species

Typically an English lavender will live and produce abundant flowers for 15 years with anecdotal reports of lavender living much longer. This is dependant on providing the lavender with the right growing conditions and crucially pruning the lavender every year.

This is in significant contrast to most garden plants (such as roses) which can require significant time, care and money to look their best.

French and Spanish lavenders may not live as long as the English varieties, even with good care which is why English lavenders are often favoured for planting as hedges.