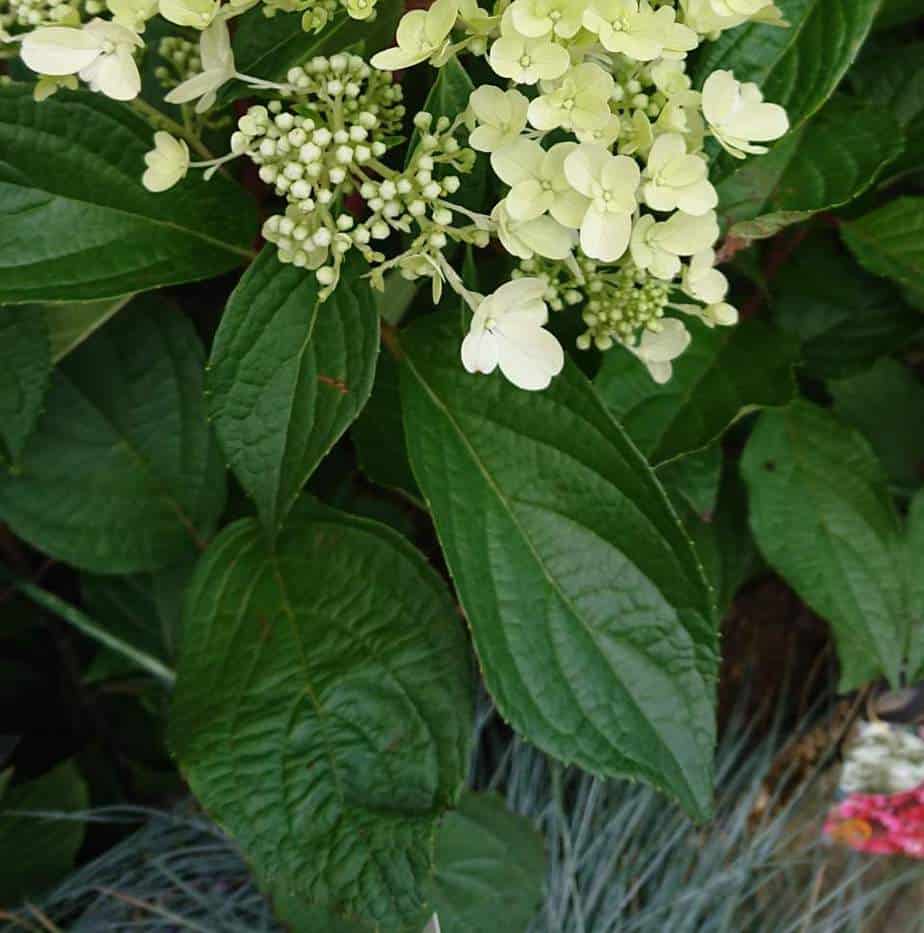 The reason your hydrangea is drooping is either because the soil is too dry, the hydrangea is in too much sun or because of excess nitrogen fertilizer. Hydrangeas prefer dappled light, consistently moist soil and slow release fertilizer to avoid drooping appearance and stay healthy.

Most Common Reasons for Hydrangea Drooping

Hydrangeas most frequently droop due to dry soil as they require the soil to be consistently moist (but not saturated), however the lack soil moisture can be due to several different reasons:

In cooler more Northern latitudes (such as Washington, Oregon or the UK etc.) hydrangeas can tolerate full sun due to the prevalence of overcast days and less intense sun and cool temperatures.

Save a Drooping Hydrangea

Good soil preparation before planting is key to providing the optimal conditions for hydrangeas to stay hydrated, with abundant compost, leaf mould or well rotted manure used to improve the soil’s moisture retaining capacity before planting.

However if your hydrangea is established and wilting the best course of action is to soak the surrounding soil with a hose for at least 10 minutes and apply a 1 inch layer of mulch to the soil around your hydrangea.

Mulching materials such as compost, leaf mould or well rotted manure have an exceptional capacity for holding water and help to conserve the soils moisture whilst retain the soils porous friable structure all of which are favourable for growing hydrangeas.

With a good soak and a generous application of mulch around the hydrangea the plant should perk up again within a day or so.

Hydrangeas naturally grow under the canopy of trees and therefore appreciate partial shade with some dappled light throughout the day.

If your hydrangeas is planted under shallow rooted trees (such as pine trees) then your hydrangea’s roots are likely to be competing for moisture.

The solutions to this is to either transplant the hydrangea or apply mulch to the plant twice a year (once in the Spring and once in the Fall) and water your hydrangea with a good soak once per week to prevent it from wilting.

(Read my article to learn how to successfully grow hydrangeas under pine trees).

Hydrangea tend to wilt if they are in full sun so it is important to locate your plant in partial shade or provide the hydrangea with shade after planting.

Locate your hydrangea in an area with morning sun followed by afternoon shade or under a tree for dappled light throughout the day for the optimal balance of enough sun to promote flowers yet not too much sun that the hydrangea is at risk of wilting.

(There are a few reasons for hydrangea not displaying flowers which can be solved, read my article why are my hydrangeas not flowering?)

Consider planting some tall trees or shrubs around the hydrangea to provide protection from wind, frost and intense sun to prevent your hydrangea from drooping and improve the conditions for flowering.

Too Much Fertilizer (Leaves and Flowers Drooping)

Another common problem that results in drooping hydrangea leaves and flowers is because of too much nitrogen fertilizer.

There are a few distinctions between hydrangeas wilting due to lack of water and a hydrangea that is drooping due to nitrogen:

Hydrangeas are not necessarily heavy feeders so applying fertilizer too frequently or in too high concentration can cause the hydrangea to droop due to the excess nitrogen.

Nitrogen promotes lush green foliage growth, which causes the stems of the hydrangea that support the large flower and all the leaves to grow sappy and weak which cause it to droop.

However some fertilizer applications can improve the appearance of your hydrangea if for example it is planted in a pot and therefore has less access to nutrients or perhaps the soil is nutrient poor. In which case a well balanced, slow release granular fertilizer is appropriate.

Once excess fertilizer has been applied and the hydrangea has grown abundant foliage that is drooping in appearance, the only solution is to scale back the use of fertilizer and the plant should show signs of recovering over the course of several weeks.

(If your hydrangeas is not flowering, read my article, why is my hydrangea not blooming for solutions that actually work).

The most common cause of potted hydrangeas wilting is because the hydrangea is planted in a relatively small pot or container.

The smaller the pot or container the less capacity for soil and the less moisture for the hydrangeas roots to draw upon which quickly leads to drooping leaves and a dying hydrangea.

If the hydrangea is in full sun, a smaller pot can heat up relatively quickly and therefore require very frequent watering in the Summer months.

The solution is to move the pot to an area of partial shade. Morning sun followed by afternoon shade is usually the best balance for promoting blooms.

Ideally the hydrangea should be planted in a pot that is at least 12-16 inches across, to ensure that there is enough soil and nutrients.

Typically the most favourable times of the year to repot hydrangeas are in the Spring or Fall as the hydrangea does not have to contend with the intense heat during summer whilst its roots are establishing.

Soak the potted hydrangea regularly with enough water so that it trickles out the base, and the plant should recover from its wilted appearance.

If the hydrangea is still wilting then increase the frequency of your watering (as much as once every 3 days) in the summer and favor a shady location over sun.

Hydrangeas often wilt after planting due to transplant shock which is due to a contrast of growing conditions from the garden centre or nursery where it was originally cultivated and your gardens specific conditions.

The roots of your hydrangeas can take some time to establish to the soil, during which time the hydrangea is vulnerable to drooping as it loses more water through transpiration from the leaves then the roots can draw upon from the new soil.

How to Save Newly Planted Hydrangea from Wilting

For newly planted hydrangeas to recover, it is important that you protect the plant from intense sun.

Whilst some sunlight is beneficial for promote flowers at this stage of planting it is likely to exacerbate the soil and leaves drying out and drooping.

Provide temporary shade for newly planted hydrangeas whilst they get established for around three weeks.

The hydrangea may have been grown in a temperature controlled green house with a very specific set of conditions, so it can take the hydrangea time to adjust to the garden soil before the leaves recover from drooping.

Always give the soil a good soak and an application of mulch on the surface of the soil around the hydrangea to conserve moisture and shield the soil from direct sunlight.

Water as frequently as required to keep the soil moist which is usually around 3 times per week, but ensure soil does not become boggy as this could cause other problems such as root rot.

Depending on how dehydrated your hydrangea is the leaves may recover in the cooler evening or it may take a few days as long as the soil is moist and your have protected the plant from the sun.