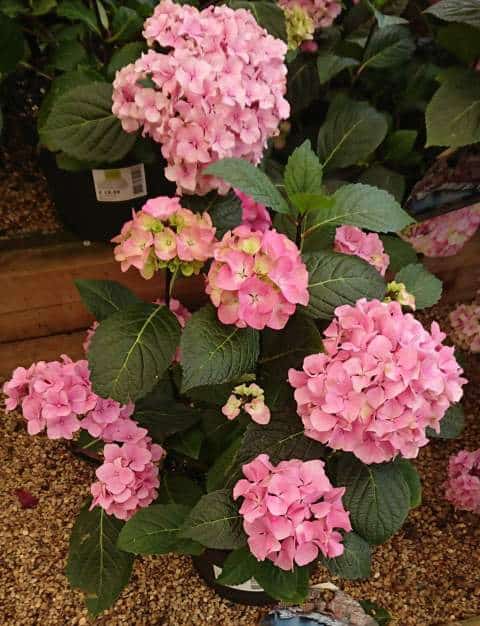 The most common reason for hydrangeas wilting is because of dry soil. Hydrangeas require the soil to be consistently and should be watered often in hot weather to prevent the hydrangea leaves and flowers wilting. Small pots dry out too quickly and do not hold enough moisture causing hydrangeas to wilt.

To revive a wilting hydrangea, give the soil a good watering, apply a layer of mulch to help conserve water and ensure your hydrangea is in a location out of the wind and in either dappled light or morning sun followed by afternoon shade.

Here is a table listing the most common reasons for wilting hydrangeas:

The word hydrangea is derived from ‘hydra’ meaning water which is an indication of the preferred conditions of hydrangea plants.

The most common reason for a wilting hydrangea is drought stress due to poor soil, lack of watering or rainfall and excess heat. Hydrangeas require the soil to be consistently moist around the root system to avoid a wilting appearance.

Hydrangeas grow naturally in woodland environments in dappled light, with soil that is composed of lots of organic matter (leaf mold) that retains lots of moisture around the root system.

If your hydrangea is in an area of full sun or sun during the middle of the day and the afternoon (when temperatures are highest) then the hydrangea leaves can scorch brown and wilt as the large leaves are losing more moisture then the roots can draw up.

Sandy or stony soils also drain too quickly for the hydrangea roots to draw up moisture causing dry soil conditions which results in the hydrangea leaves and flowers wilting.

Hydrangeas are also one of the first plants in the garden to suffer with wilting leaves in a heat wave or drought thanks to their high demand for moisture.

How to Revive a Wilting Hydrangea Suffering Drought Stress

By recreating the hydrangeas preferred growing conditions and ensuring that the surrounding soil is consistently moist they hydrangea should recover from its wilting appearance.

The reason hydrangeas wilt after planting is because of transplant shock, caused by a contrast in soil, light, and watering conditions from the environment in which the hydrangea was grown to the conditions of your garden. Hydrangea leaves wilt as the roots are not established and cannot uptake enough water.

When hydrangeas are cultivated in nurseries to be sold commercially they are grown in a very specific, controlled green house environment. Conditions such as temperature, humidity, watering, sunlight, air flow soil structure are all consistent and designed to grow the hydrangeas for sale.

The hydrangea adapts to growing in this specific controlled environment. When you plant your hydrangeas in your garden the contrast in conditions can cause transplant shock as the hydrangea has to adapt to a new set of conditions.

This shock often causes the hydrangea to wilt as a sign of stress.

The roots has to adapt to a new soil structure which may not retain as much moisture or perhaps the increased air flow is sapping too much moisture from the leaves.

If the leaves are losing too much moisture they hydrangea wilts as a survival strategy as wilting effectively reduces the surface area of the leaf from which it can loose water, until the roots can establish in the new soil and draw up water more effectively.

How to Revive a Wilting Hydrangea After Planting

The most important thing to remember is that the roots require time to establish after planting which means the hydrangea cannot uptake moisture as effectively until it becomes more established.

This is why frequent watering is so important for wilting hydrangeas after planting.

A layer of compost used as mulch is a really effective way to conserve moisture in the soil to create the right conditions for your wilting hydrangea to revive after planting.

After a few weeks the hydrangea should adjust to its new conditions and the leaves should recover from their wilted appearance.

(Read my article, how to revive a dying hydrangea).

The reason for potted hydrangeas wilting is often because the pot is too small or pots without drainage holes in the base. Hydrangeas require consistently moist soil. Small pots dry out much quicker which results in a wilting hydrangea.

Pots without drainage cause the soil to become saturated and the hydrangea wilts and dies from root rot.

Hydrangeas have lots of leaves that have a large surface from which to lose water. Hydrangeas quickly wilt in dry soil as they rely on moisture at the roots to draw up enough moisture to support the large leaves.

Hydrangeas have extensive and thirsty root systems that can quickly out grow a pot. Smaller pots have less capacity for soil and therefore hold much less moisture so they hydrangea can quickly wilt even after watering.

If the pot does not have drainage holes in the base or there is a tray or saucer underneath then this can prevent excess water draining and cause the soil to become saturated.

If the soil is saturated and water is pooling around the roots then this excludes oxygen from the soil which prevents root respiration.

If the roots cannot respire as they do not have access to oxygen then this interferes with the roots ability to draw up moisture and nutrients from the soil to transport around the plant.

If the roots cannot transport water or nutrients around the plant the leaves wilt and can turn yellow. If the roots are in saturated soil for too long this causes root rot and results in a dying hydrangea.

How to Revive a Hydrangea Wilting in a Pot

As a hydrangea matures the roots system can be quite extensive so whenever I see hydrangeas wilting in pots, I always check whether the roots are pot bound or not.

Hydrangeas need a lot of potting soil around the roots as they prefer conditions to be consistently moist which is why a larger pot with a greater capacity for soil is so important when potting up hydrangeas.

Potted hydrangeas that are wilting can be revived if you replant the hydrangea in a larger pot, replace the potting soil and water as often as required so that the soil is moist.

Remember to keep the hydrangea in an area of morning sun followed by afternoon shade or dappled light throughout the day to help it revive and avoid leaf scorch.

If the potted hydrangea has been in saturated soil for a long time then it can be difficult to revive as the roots rot which kills the hydrangea.

Too Much Fertilizer Can Cause Wilting Hydrangea Leaves and Flowers

Too much nitrogen fertilizer applied too often or in too high concentration can cause excess foliage growth which grows weak, sappy and droops down with a wilting appearance. Excess nitrogen in the soil also causes the hydrangea to display fewer flowers then usual.

Hydrangeas are relatively heavy feeders and usually benefit from a fertilizer application in the Spring.

However too much nitrogen fertilizer tends to cause hydrangea stems and leaves to grow weak and sappy (and display fewer flowers) which causes it to wilt and it is more vulnerable to pests and diseases.

Excess nitrogen can also be from lawn fertilizers which can dilute in heavy rain and run off into garden boarders and affect hydrangeas.

There is not much you can do after the fertilizer has been applied and the hydrangeas has wilted or is drooping, other then scale back the use of fertilizer.

I recommend using a miracle-gro granular fertilizer that contains all the nutrients that the hydrangea requires and releases nutrients more slowly which prevents the hydrangea wilting or displaying fewer flowers.

(Read my article, why is my hydrangea not flowering?).

The hydrangeas should revive from its wilting appearance the following Spring.

(Read my article, why are my hydrangea flowers turning green?)