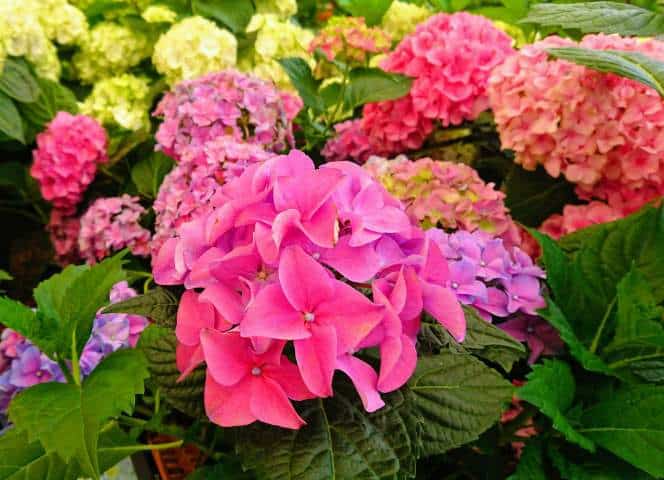 Hydrangeas of all cultivars should bloom as early as Spring or mid Summer through till late Summer with each flower lasting for several weeks.

The reasons for hydrangeas not flowering are too much fertilizer, lack of sun, transplant shock, moisture stress, frost damage on developing flower buds and because of hard pruning the old wood which supports this seasons new hydrangea blooms.

1. Too Much Fertilizer Causes Fewer Flowers

One of the most common reasons for hydrangeas to not flower as much as they should is because of high strength fertilizer or too many applications of nitrogen based fertilizer.

Excess nitrogen promotes foliage growth at the expense of flowers which is why you have to be careful when applying fertilizer to hydrangeas.

With good soil preparation prior to planting (amend the planting area with lots of compost) and regular applications of mulch, most established hydrangeas do not require any fertilizer and bloom exuberantly throughout the Summer.

However if you have a potted hydrangea or your soil does not retain much nutrients then an application of fertilizer can be beneficial for the healthy and flowering of your hydrangea.

How to Solve it:

Scale back any applications of fertilizer as nitrogen can encourage abundant soft leaf growth that is more vulnerable to frost damage as well as fewer flowers.

If your soil is poor or your hydrangea is potted then an application of a half strength balanced fertilizer applied once in the Spring and then again in the Summer around July is all the hydrangea requires for spectacular blooms.

Choose a general fertilizer that has a ratio of equal parts Nitrogen Phosphorous and Potassium (NPK) to ensure all the nutrients a hydrangea requires without over indulging the plant with nitrogen.

For established hydrangeas in good soil, the best way to ensure blooms is with an application of mulch to preserve moisture, and slowly add nutrients to the soil and the hydrangea should display spectacular blooms without requiring any additional fertilizer applications.

2. Not Enough Light for Flowering

Too much shade can also impact the blooms of a hydrangea.

Whilst hydrangeas can flower well in the shade, most hydrangeas flower more extravagantly in the dappled light under a tree canopy or in partial sun as this replicates their natural growing conditions.

Consistent shade without any bright light or full sun, can cause spindly growth of both stems and foliage with few flowers.

How to solve it:

The only way of fixing the problem of low light is to:

Full sun often can often scorch the leaves of hydrangea (particularly in hot climates) so it is important to find a good balance of shade and sunlight with either some dappled light or exclusively morning sun to ensure hydrangeas flower to their full potential without suffering in the sun.

The species Hydrangea paniculata is the hardiest and most versatile hydrangea, adapting well to full sun as well as shade.

Once you have transplanted your hydrangea or cut back overhanging plants the hydrangea should display more blooms the following year.

Here is a YouTube video for how to successfully transplant hydrangeas:

3. Pruning at the Wrong Time and Pruning too Hard Prevents Blooms

Hydrangeas flower from mid Summer to late Summer (June/July until late August) on shoots that emerge from last years growth.

Therefore pruning too hard back into old wood cuts back the part of the hydrangea from which flowers are produced and the hydrangea then cannot bloom.

Hydrangeas do not necessarily require an annual pruning in the same way roses do and still display lots of flowers, however consistent light pruning is best practice to stimulate blooms.

When and How to Prune for Flowers:

Pruning hydrangeas for optimal flower displays is easy and the plant is forgiving compared to other plants so do not worry if you make a mistake as the hydrangea should grow back well the following year.

Here is a helpful YouTube video for a visual guide to pruning hydrangeas:

Read my article, why are my hydrangea flowers turning green?)

Frost damage, particularly late frosts in the early Spring can potentially damage the developing flower buds which then turn brown.

This can compromise the flowering of your hydrangea and is one of the reasons hydrangeas prefer some shelter under trees, rather then exposed and windy locations.

Frost damaging developing new tender buds is one of the key reasons for leaving the old flower heads on hydrangeas over Winter as whilst the spent flower head does not necessarily look neat and tidy over Winter it does function as effective protection for the developing buds.

In the case of damage flower buds due to frost, use your secateurs to cut back frost damaged growth to the next buds as the buds on the outermost part of the plant are most exposed and therefore likely to be damaged whilst flower buds further down the stem are often preserved.

(Read my article, how to revive a wilting hydrangea).

If you have just moved a hydrangea or recently planted a young plant from a garden centre then it can take a year to become established before it displays flowers, although some can flowers in the first year with no problem.

This is particularly prevalent for plants that have been cultivated in optimal controlled conditions in the nursery and then they face a contrast in temperature light levels, soil and moisture when planted in your garden.

Young or recently hydrangea plants may take some time to establish in their new home before the flowers as their energy directed to producing new roots and foliage and adjusting to the new conditions.

However as long as hydrangeas are in the following conditions they can establish and to their new environment and start to display flowers freely after the following year:

Hydrangeas require the soil to be consistently moist yet free draining as the roots do not tolerate saturated ground.

For established hydrangeas if the soil has been well prepared before planting (amended with lots of organic matter) and regular applications of mulch in the Spring and there is enough shade to conserve moisture, then hydrangeas often do not require any additional watering in temperate climates.

However in hot climates or for hydrangeas that are planted in sandy/stony soils hydrangeas can suffer drought with drooping leaves.

Drought can affect the formation of buds and limit the time the flowers last on your hydrangea.

In times of drought water the hydrangea as frequently as required to keep the soil moist to a fingers depth and apply a mulch of compost, leaf mould or well rotted manure to further conserve soil moisture and the hydrangea should have all the resources it requires to stay in flower.

Equally, slow draining boggy soils can cause problems such as root rot which not only prevents blooms but can kill the plant.

If your garden soil is naturally boggy and slow draining then it is far easier to plant hydrangeas in a large pot with plenty of compost to hold moisture yet provide better drainage to avoid root rot.