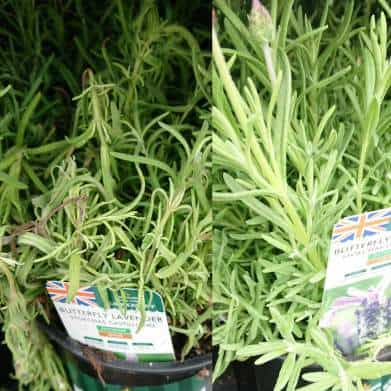 Lavenders are low maintenance plants that live up to 15 years with the right care. All lavenders originate in the Mediterranean region of Europe and are adapted to a specific set of conditions.

In order to revive lavender you have to replicate some the conditions of their native environment in your garden, in particular the soil conditions.

If your lavender looks worse for wear there are several ways to revive it, but first you will have to diagnose what is causing the lavender to look unwell and in need of saving.

Identify why the Lavender needs Reviving

The most common reasons lavender need reviving are:

All lavenders originate in the dry, sandy regions of the Mediterranean coast in Southern Europe. Therefore lavenders require infrequent watering, fast draining soil with plenty of sunshine and some airflow between the foliage.

Lavenders are drought resistant plants that thrive in dry environments.

Established lavenders only need to be watered once every two weeks in the growing season and they do not require water in the winter. (For more information take a look at my article on how often to water lavenders).

If the lavender is replanted in fresh, well draining soil and you refrain from watering for at least two weeks which will give the lavender the best chance to revive over the next few weeks.

In gardens with slow draining soil (such as clay) replanting the lavender elsewhere in the garden will be ineffective as it is likely to still suffer from root rot if water does not drain quickly after watering and rainfall.

In which case your best option is to transfer the lavender to a pot, container or raised bed.

In a pot you can control the soil mix much easier then in your garden boarder and therefore tailor the soil to the lavenders preference. (Read my article to learn the best practices for how to transplant lavender and avoid transplant shock).

Remember lavenders need full sun to flower their best which also increases soil evaporation and contributes to the dry conditions that lavender need to thrive.

Lavenders also need to be planted 2-3 feet away from each other to allow for airflow which again contributes to keeping the plant dry and less likely to develop root rot.

Follow these steps and your lavender should begin to revive and show signs of recovery after 3 weeks.

Lavenders that are Leggy and Have Yellow Foliage

Lavenders natural soil preference is for soils with low to medium fertility. In their native environment lavenders grow in sandy or gravelly soils. Lavender are specially adapted to these seemingly harsh conditions.

If lavenders are planted in soil that has a high organic content, or high in nutrients, then the lavender will grow leggy and produce fewer flowers which are contrary to the aim of gardeners!

Lavenders do not need feeding and supplementing the soil with fertilizer will often turn the foliage of the lavender from green to yellow. Yellow leaves are a sign that there is too much nitrogen in the soil and the plant will be more susceptible to disease.

How to Revive Leggy Lavender with Yellow Foliage

Amending the soil with sand or gravel is important as this will balance out the fertility of the soil and recreate the low to medium soil fertility that lavenders require.

By volume there should be around 30% sand or gravel and 70% compost when planting lavender in pots or amended garden boarders. For more explanation I recommend that you read my article on the optimal soil mix for lavenders.

Once the lavender has settled into its new home then it may take a season and a good prune to fully revive from its leggy growth and yellow foliage.

All lavenders turn woody over the course of their life span. The challenge as gardeners is to slow down the woody growth as much as possible. A well maintained English lavender can live up to 15 years, although French lavenders only last 4-5 years. (Read my article for more tips on how to increase lavender longevity).

Pruning every year is absolutely essential to increasing their longevity as it reduces the rate at which the wood forms each year.

How to Revive Woody Lavender

Of all the reasons that lavenders may not be at their best, woody lavender is the most difficult to revive.

The only way to revive woody lavender is to prune it back, but do not prune into the woody growth. The wood at the base of the lavender is unproductive and will not support any new growth.

Lavender only flowers on new seasons growth, so cutting into the woody will prevent it from flowering and potentially kill the plant.

Instead cut the top third of green growth and prune the lavender into a mound shape as much as possible as this will help to resist weather and prepare for Winter .

The best time to prune lavender is in the early Spring (March/April) or late fall (September/October) which is either before after the flowering season.

To be honest aside from pruning, there is not much you can do for woody lavender and you may have to simply pull up the plant and replace it with a new lavender.

A cost effective alternative is to take cuttings from the lavender for propagation. Propagating lavender is reasonably easy and can be done without hormone root powder.

The best time for taking cuttings is in the early spring. Watch this YouTube video for a clear, visual explanation of propagation from cuttings.

Revive Lavenders in a Pot or Container

The most common reasons for potted or container lavenders that look unhealthy and in need of revival are:

Ideally pots should measure 16 inches across with a similar depth. A pot this size has the capacity for enough soil for insulating the roots from cold weather and to contain the right soil mix of sand or a porous texture and good drainage.

Small pots can limit the growth of your lavender. Lavender soil need to have a porous structure so that water drains through the soil and away from the roots quickly and so that there is enough oxygen in the soil for root respiration.

Always plant lavender in a 16 inch pot even if it is a smaller variety such as ‘Hidcote superior’ or ‘Munstead’ to keep the plant healthy and blooming each year.

All lavenders pots or containers should have drainage holes in the base so water does not pool around roots. A common mistake is to use a drip tray underneath to catch the water so it does not go over a patio or indoor area.

This will have the effect of keeping the soil moist and will promote the conditions that lead to root rot.

Lavenders do not need watering often (if at all once established) so I would recommend that you move the lavender pot onto a lawn or somewhere similar for 30 minutes after watering so that the water does not trickle over the patio or indoor area.

For the full guide, read my article on choosing the best pot for lavender.

All lavender species require full sun to grow to their full potential and produce the strongest blooms, oils and fragrances.

The less sun a lavender receives the less it will flower. Lavenders that see less the 6 hours of sunlight during the growing season (Spring and Summer) will likely have stunted growth and die.

The only way to revive lavender that has been in the shade is to transfer it to a pot and place it in the sun as quickly as possible. Lavenders require sun all year round, including during the winter dormancy so plant the lavender in a nice open space that is not under a tree canopy or any other shade.

Lavender may revive if it is moved into sun in time, however there is no guarantee. Otherwise you should follow the best care practices for lavender to ensure it has a chance to recover.

Not all lavenders will survive winter outdoors in climates that experience frost and freezing temperatures.

Therefore French and Spanish lavenders will have to be grown in pots and brought indoors for winter protection in cold climates. Frost damaged lavenders are difficult to revive and it is likely you will have to replace them.

However, bear in mind that lavenders are dormant over winter and therefore you should wait till the early Spring to see if there are any signs of new growth and any chance of the lavender reviving.