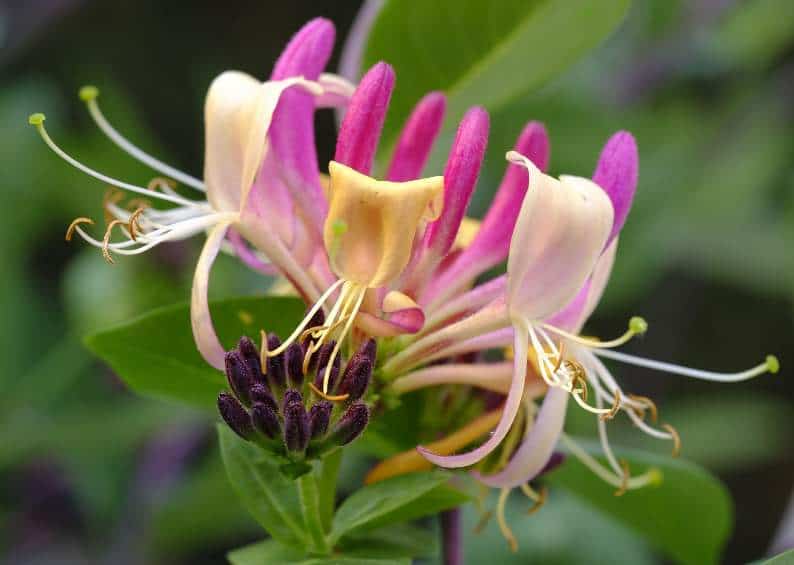 The reason for honeysuckle not flowering is usually because of pruning at the wrong time of year or pruning too hard. Honeysuckle flowers on previous years growth, so pruning honeysuckle in the early Spring removes the growth on which it flowers, resulting vines with lots of foliage but no flowers.

The 6 most common reasons for honeysuckle not blooming are:

There are two common pruning mistakes that can prevent your honeysuckle vines from flowering:

Honeysuckle plants do benefit from annual pruning in order to maintain shape, promote flowering vines and to prevent it becoming an overgrown and unmanageable mass of thickets.

However it is very important to cut your honeysuckle back at the right time to promote flowers and to avoid cutting the growth that supports the blooms for the following year.

The optimal time to trim back honeysuckle is straight after the flowers drop. Different varties flower at different times of the year so the exact time to prune depends on your specific cultivar of honeysuckle.

When pruning back your honeysuckle the goal should be to maintain shape and encourage the vines to grow around the structure that supports them whether it is a trellis, wall or frame, yet also cutting back any overgrown vines that look untidy to avoid congested growth which can also hinder flowering.

The lighter the prune of your honeysuckle, but still keeping the vine tidy the better for flowering.

It should be noted that hard pruning of old dead wood which is not longer growing or producing vines can be cut back at anytime of year.

This allows more light and airflow through the plant and prevents your honey suckle looking like a tangled mess.

Honeysuckle is a hardy plant and can tolerate a hard prune to improve its shape if it is neglected and overgrown but it may be 1 or 2 years before you see a good display of flowers following a severe pruning.

2. Too Much Fertilizer Reduces Honeysuckle Flowering

Honeysuckle is a woodland plant that thrives in good soil with lots of organic matter.

A fertilizer can be used to improve growth and promote flowers if the honeysuckle.

However strong fertilizer or frequent applications of fertilizer should be avoided as this promotes foliage and growth of vines at the expense of flowers.

Typically one application of slow release all purpose fertilizer at the start of Spring (after the threat of frost) is all a honeysuckle requires to flower and stay healthy (assuming the honeysuckle is planted in good soil with lots of organic matter).

Honeysuckle tend to grow very quickly with long vines and abundant foliage when they has been too much fertilizer applied.

Occasionally excess nitrogen from lawn fertilizer can run off after heavy rainfall into garden boarders and affect your honeysuckle (as well as other plants).

So even if you have not directly applied fertilizer to your honeysuckle it may be a consequence of water soluble nitrogen run off from lawn treatments to the soil around your honeysuckle that is preventing flowering.

Once fertilizer has been applied there is not much you can do to promote flowering this season and you may have to wait till the following year for blooms.

3. Not Enough Nutrients for Honeysuckle to Bloom

Whilst using too much fertilizer can prevent flowering, soil that is low in nutrients can also stop your honeysuckle flowering.

Honeysuckle is native to woodland where it thrive in hummus rich soil with its own application of mulch in the form of leaf litter every year.

In some gardens with nutrient rich soil, an application of mulch around the base of your honeysuckle is all that is required to promote flowering.

However the importance of fertilizer increases if:

Whether your honeysuckle is potted, under a tree or in sandy soil, an application of mulch can help to conserve moisture, improve soil structure and add nutrients to the soil which helps promote flowering.

Apply a one inch layer of mulch (compost or leaf mould is optimal) around the base of your honeysuckle in the Spring create more favourable conditions for the honeysuckle to flower.

I would recommend mircle-gro granules as it releases its nutrients slowly without burning the roots of your honeysuckle.

An regular application of mulch in the Spring with some slow release fertilizer should increase the flowers on display the following year.

Other symptoms of low nutrients and drought are yellowing leaves and leaf drop. If your honeysuckle has these symptoms read my article why is my honeysuckle dying for information on how to save your honey suckle.

4. Not Enough Sun For Flowering

Honeysuckle is a woodland plant and their vines climb trees and hedgerows to reach sunlight so it has the energy to flower.

If you honeysuckle is not flowering then it may be planted in too much shade.

If the honeysuckle is planted in full shade then often the leaves can drop and the plant often dies back.

The optimal conditions for flowering honeysuckle is the soil in the shade (so that the roots keep cool and the soil retains moisture) and the vines are in the sun which increases flowering.

Partial sun or dappled light throughout the day is often enough for a good display of flowers but full shade during the Summer on all parts of the plant reduces flowering significantly.

If your honeysuckle is not flowering and its in a shaded area, consider cutting back any overhanging tree limbs that are casting shade or if the honeysuckle has been recently planted then it may be possible to transplant it to a sunnier location.

5. Honeysuckle is not Mature Enough to Flower

Newly planted honey suckle often does not display flowers for up to three years if it is a small plant.

Honeysuckles take time to mature and invest time after planting, to establishing their roots system in the soil and growing their vines around their supporting structure.

In their woodland environment they spend their first few years climbing up trees and hedgerows so that their vines are in full sun. It is the vines that see the most sun that flower more prolifically.

Your honeysuckle should flower after 2 or 3 years if the following conditions are there:

Once your honeysuckle has established after planting for around 3 years and the conditions for growing are favourable, it should display abundant flowers in the following Summer.

Honeysuckles often struggle to display flowers if the soil is too dry as they require evenly moist soil (without being boggy) to grow and flower.

Honeysuckle grows naturally in woodlands where the soil is composed of lots of broken down leaf litter which helps to retain moisture even in hot and dry summers.

There are several reasons why the soil around honeysuckle can be too dry:

With a few adjustments it is easy to create more favourable conditions for honeysuckles in your garden that have been suffering from drought.

By improving the soil with the use of mulch and watering your honeysuckle in the Spring and Summer you are recreating their preferred soil and moisture conditions which should provide your plant with all the resources it requires to display flowers on its vines.