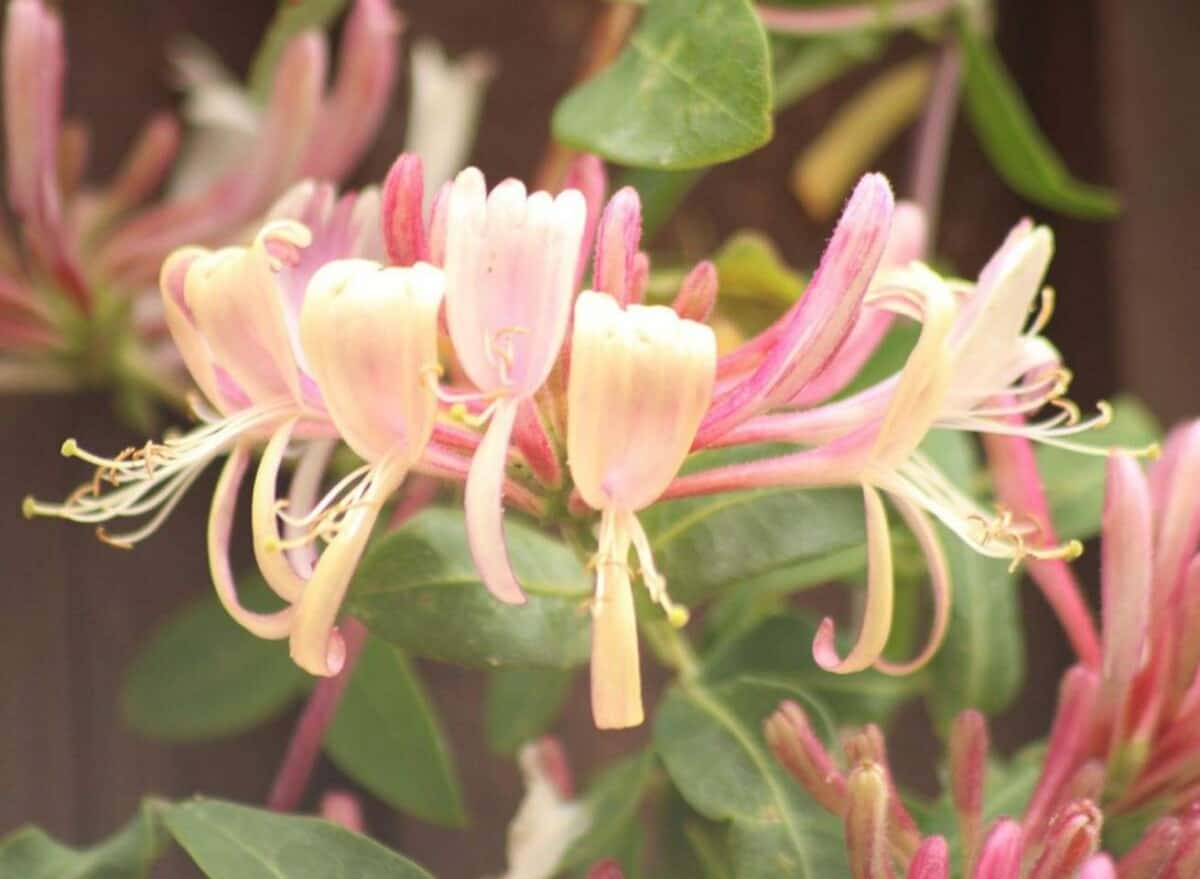 The reason for a dying honeysuckle is usually because the soil is too dry or low in nutrients. Honeysuckle requires consistently moist, nutrient rich soil so if the soil is nutrient poor and too dry the honeysuckle leaves turn yellow and drop off with a dying appearance.

The most common reasons for dying honeysuckle:

One of the most common causes of honeysuckle leaves turning yellow and leaf drop is due to drought and dry soil at the roots of your honeysuckle.

Honeysuckles grow naturally in woodlands and in hedgerows in soil that is rich in organic material with a high proportion of decomposed leaves.

Decomposed leaves have an exceptional capacity to hold moisture yet they retain a porous structure that allows excess water to drain away.

This provides the optimal balance of soil moisture for honeysuckles as they require consistently moist soil and suffer if there is a temporary drought.

When honeysuckles are planted in gardens they can suffer from drought despite high rainfall for a few reasons:

For more information and best practices for flowering read my article on why your honeysuckle isn’t flowering.

Ideally the honeysuckle should be planted into soil that has been amended with lots of organic matter to retain moisture as this replicates natural conditions in its native woodland habitat and reduces the risk of drought which causes the yellow leaves and leaf drop.

If your honeysuckle is a young plant then it can be lifted out of the ground temporarily whilst you add lots of compost and leaf mould to the planting area to increase resistance to drought.

Consistently adding a mulch once or twice per year (ideally in the Spring or Summer) improves the soils capacity for retaining moisture so that the conditions of your garden soil are more favourable for growing honeysuckles.

With consistent watering and the addition of mulch the honeysuckle should recover.

Whilst the yellow leaves may still drop off, the following year the honeysuckle should grow more healthy green leaves and be in better condition to grow and display flowers.

Honeysuckles grow to their best when in good soil that is rich in organic matter. If the soil is poor then honeysuckles can die back, not flower as well and the leaves can drop as well as turn yellow.

The soil can be low in nutrients for a few reasons:

The key to reviving honeysuckles that are suffering because of a nutrient deficit in the soil is to:

Apply a 1 inch layer of compost or leaf mould around the base of your honeysuckle in the Spring and perhaps again in the Summer.

This should mitigate risk of drought and improve the soils nutrient profile so that your honeysuckle has all the resources to thrive and display flowers.

Consistent mulch application can improve nutrient poor soils so that they emulate the soil of the honeysuckles natural environment.

Additional fertilizer can be improve the appearance of your honeysuckle and is important to help revive the plant.

I personally recommend a product such as miracle-gro granulated fertilizer as it is easy to apply with the correct balance of nutrients at the right concentration.

This product also ensures that the nutrients are are released slowly which reduces the risk of problems associated with too much fertilizer (which can prevent honeysuckle form flowering).

Honeysuckles thrive when the roots are in the shade and the vines are in the sun. Whilst full sun is not necessary, partial sun or significant dappled light is required to promote flowering.

Honeysuckle uses its climbing vines to find sun so that it has the energy to flower.

Full shade is not only detrimental to flowering but also can cause leaf drop and a yellowing of the leaves.

If the leaf drop and yellowing of leaves is localised to perhaps the lower half of the honeysuckle and the rest of the plant looks in good health then this may be because the upper half has climbed so it is in direct sun.

The honeysuckle often only invests in the growth of leaves that are in a position of sun which causes the plant to drop leaves lower down the plant.

If necessary you can plant a shrub that prefers shade (hydrangea or rhododendron) in front of the honeysuckles lower half so you can’t see the sparse growth or you can be assured that the honeysuckle is likely in good health and the vines that are in the sun should flower.

In areas of full shade you can either cut back the canopy of any overhanging branches for more light or transplant the honeysuckle to a sunnier location as they often do not live long or flower well in full shade.

Honeysuckle is unfortunately susceptible to powdery mildew however it does not necessarily mean your honeysuckle is dying and with the right care, the honeysuckle can be revived. However recovery depends on how early you catch the infection.

The risk factors for honeysuckle with powdery mildew are:

To treat powdery mildew the most important step is to:

With good care, regular watering and treatment honeysuckle can make a full recovery from powdery mildew.

Applying a balanced fertilizer can help in recovery as powdery mildew can stress the honeysuckle and reduce nutrient availability.