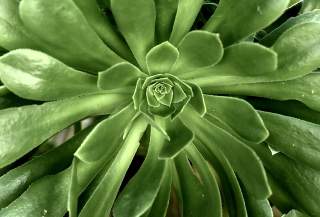 The reason succulent leaves shrivel is because they are either over watered or under watered. Succulents need the soil to dry out between bouts of watering. If the soil is damp the stress causes the leaves to shrivel turn yellow and mushy. Under watering causes succulents to shrivel and turn brown.

The primary difference between succulents shriving due too much or too little water is that over watered succulent leaves also turn yellow, black or translucent and have a mushy texture whereas under watered leaves shrivel and eventually turn brown.

Another clue as to whether the succulent is suffering from over watering is to test the soil for moisture. Use your finger to feel the soil at the bottom of the pot through the drainage hole to see if you can detect any moisture.

If the soil is damp then over watering is your course for shriveled leaves or if its dry then it is under watered.

How to Revive Succulents with Shriveled Leaves due to Under Watering

Succulents are native to deserts and they are adapted to drought conditions but they can still suffer from under watering if they are neglected.

If it has been more then two weeks since watering and your succulent leaves are shriveling up then under watering is the most likely cause.

Succulents store moisture in their fleshy thick leaves as an adaptation to growing in desert conditions across the world, so the leaves shriveling is usually the first indication of your succulent being under watered.

The good news is that if you leaves appear to be only somewhat shriveled then it is highly likely that the succulent can recover with a more appropriate watering frequency.

How often you should water succulents can depend on many factors so it is difficult to give generalized advice about watering but typically watering your succulents once every two weeks is appropriate in most circumstances but this can vary significantly.

Generally speaking your succulent should return to its full and plump appearance after two watering cycles if you are watering with a good soak.

However do consider factors that exacerbate drying or increase moisture for the succulent that can cause leaves to shrivel, for example:

An element of experimentation is required to find the perfect water frequency for you succulent variety in your personal conditions and remember it is easier to revive a underwatered succulent then an over watered succulent so keeping your succulent on the dry side is better.

However if your leaves are shriveling and its been a while since your last bout of watering, give the succulent a generous soak and it should show signs of recover in the following week.

Recording when you last watered your succulent on your phone or with a pen a paper is often helpful.

Sometimes people misinterpret the advice that ‘succulents do not need much water’ and water the plant too lightly.

If you water too lightly then the top inch or so of your soil can be moist but the water does not infiltrate down to the succulents roots where it is required.

The moisture then evaporates from the soil and the roots of your succulent do not have the opportunity to uptake any moisture which causes a deficit and the first sign of stress is usually shriveled leaves, and the color of the leaves can start to look somewhat brown after an extended period of drought.

Whilst they should not be watered too frequently, succulents actually require a really good soak so that water trickles out the base of the pot to ensure that the water reaches the roots.

The soil should then be left to dry for about 14 days (this can depend on your climate) before watering again.

This watering regime mimics the moisture cycle in the succulents native desert environment where they receive an occasional down pour of rain followed by drought like conditions.

Always water your succulents so that water visibly trickles out the base of the pot (which should have drainage holes) to ensure that you have watered you succulent with the right quantity of water to prevent it from shriveling due to dehydration.

Shriveling is usually the first sign of stress due to watering too lightly but the succulent should recover well with proper watering.

Hydrophobic Soil Repels Water Away from the Succulents Roots

Some people diligently follow the advice of watering their succulent with a good soak and with the correct watering frequency yet there succulent still shrivels as if it is too dry.

This is most often due to succulents being in a potting mix that contains peat which can turn hydrophobic (repels water) when it dries out.

When soil dries out (as it should between watering your succulents) some potting mixes can bake to a hard texture which does not allow water to infiltrate and reach the roots of your succulent.

Instead the water is repelled and runs off the surface of the soil and down the side of your pot and sub-sequentially out the base of the pot.

This can give the impression that the succulent is well watered, whereas in reality the soil underneath the surface and around the roots remains dry after watering.

This effect then causes an extended period of drought that dries out your succulent leaves so that the shrivel.

Re-pot your succulent and fill the pot with a more appropriate potting soil.

Succulents grow in very gritty soil in their native habitat, that drains very quickly and does not hold water around the roots.

Re-pot your succulent with a special succulents and cacti potting mix (available form garden centers and on Amazon) that recreates that drainage characteristics of the soil in which succulents live in their native habitat.

A specifically formulated succulent potting soil retains a porous, aerated structure even when it is bone dry.

This prevents the soil becoming hydrophobic and allows water to infiltrate the soil freely to reach the roots without it running off the surface which causes drought.

Succulent soils contains more inorganic material (such as sand and grit at the right particle size) which drains at the optimal rate and also emulates the nutrient profile of the soil in which succulents thrive in the wild.

With the right soil mix your succulent roots can uptake the moisture they require, whilst also draining effectively so that the roots doe not succumb to root rot.

Succulents Shriveling due to Over Watering and Excess Moisture

Whilst shriveling is more typically associated with an under watered succulent, it can also be a symptom of the soil being too damp around the roots for a long time.

Typically over watered succulent leaves can turn yellow or a translucent color, with a mushy texture and droop which is a definitive sign of over watering.

Too much moisture around the roots that results in shriveling can be caused by:

Succulents require the soil to dry out between bouts of watering as this replicates the balance of moisture in the succulents desert habitat.

So it is important to water the succulent the correct way and account for any other causes of excess moisture around the roots that can cause stress.

How to Revive an Over Watered Succulent with Shriveled Leaves

By following each of these points the succulent can enjoy a watering cycle that suits their requirements and the leaves can restore from their shriveled appearance to a green firm appearance.

However if your succulent leaves do not look any better after 2 weeks and start changing color then to save the succulent you should cut away any parts that are turning black and try to propagate the succulent from cuttings and leaves any healthy remaining parts of the plant.

Propagation of succulents is very easy as they naturally reproduce vegetatively, by their leaves which develop roots. Propagation from cuttings also has a very high success rate. Watch this YouTube video for how to easily save you succulents: