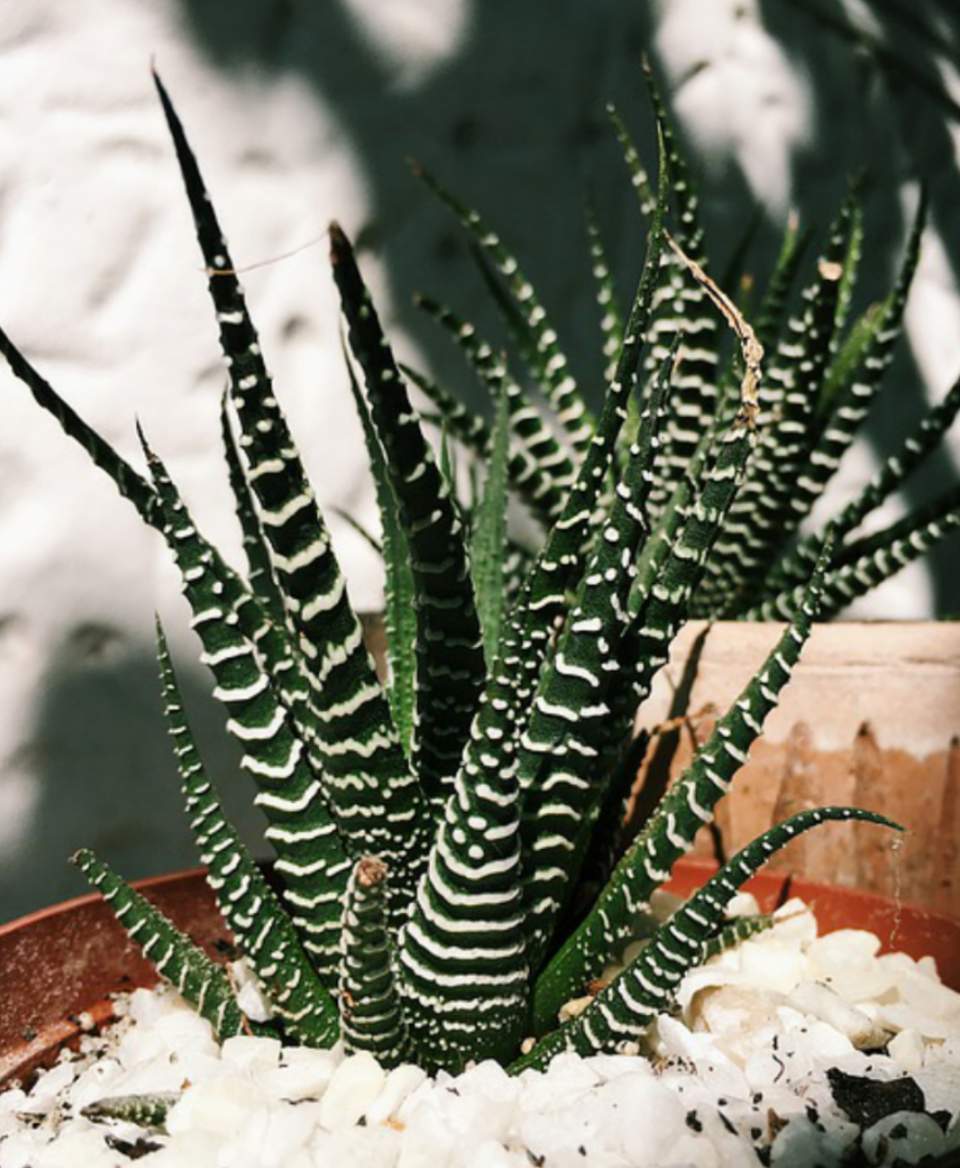 The reason for a dying zebra succulent is most often because of over watering which turns the leaves brown or yellow with a drooping and dying appearance. Too much direct sunlight can turn zebra succulents white. Watering too lightly causes leaf tips to turn brown and the lower leaves to die back.

To revive dying zebra succulents (Haworthiopsis fasciata) it is important to recreate the conditions of their native environment with gritty well draining soils, watering when the soil has dried out and to locate zebra succulents in bright, indirect light.

Over watering rather then under watering is more often the cause of a dying zebra plant due their adaptations to tolerate drought conditions.

Keep reading to learn how to revive your dying zebra plant…

Zebra plants is a drought resistant succulent native to South Africa where they grow in gritty, well draining soil that does not retain much water, with infrequent rainfall in bright, indirect light.

Zebra succulents tun brown or yellow with mushy leaves with a dying appearance if the soil is damp, or saturated or even just too moist around the roots for too long from watering too often.

To grow zebra succulents so that their leaves remain healthy it is important to recreate some of the growing conditions in their native environment by planting them in gritty soil and watering only when the soil has dried out completely.

Watering your zebra succulent too often, or planting it in ordinary potting soil which tends to remain damp for too long, causes too much moisture around the roots for this drought tolerant plant to tolerate.

Yellow, brown and mushy leaves are the first signs of stress due to over watering.

This causes the aloe vera leaves to turn yellow, brown or translucent with soft leaves as a sign of water stress.

This can be accentuated by the fact that zebra succulents can enter state or dormancy in Summer if the temperatures are really high.

A summer dormancy where the zebra succulents stops growing is a survival strategy to conserve water reserves in hot and dry climates.

This reduces the demand for moisture which increases the risk of the leaves turning yellow or brown in response to frequent watering.

It is also important that your zebra succulent is in a pot with drainage in the base to allow excess water to drain out the bottom so that the soil does not become saturated.

Note that saucers trays and decorative outer pots can also prevent water escaping from the base of the pot properly which can also be the cause of yellow or brown leaves or potential root rot.

How to Revive Yellow and Brown Zebra Succulent

To establish when the potting soil is dry, feel the soil at the bottom through the drainage hole. If the soil is still damp then delay watering for a few days. If the soil is dry then this is the perfect time to water your zebra succulent.

Water when the soil dries out, replicates the natural cycle of moisture conditions of the soil in the zebra plants native environment which keeps the plant healthy.

Ensure that there are no roots or compacted soil that are blocking the drainage holes that could slow down drainage.

Once the soil has dried out completely around the roots of the zebra succulent and you are watering with the best practices or replaced the soil with gritty succulent soil then your zebra plant has a chance to revive from its dying appearance.

You should start to see signs of improvement in the condition of your zebra succulent in the following 2 weeks.

When the leaves of zebra succulents turn yellow or brown this is often just a sign of stress from over watering but if they start to turn black then this can indicate root rot which is much more difficult for the plan to recover from.

If the zebra succulent has healthy offsets growing in the pot then I would recommend trying to remove them from the diseased black part of the plant for propagation.

(Zebra succulents can require watering more often or less often depending on the time of year, read my article to learn all the best practices for watering zebra succulents).

Zebra succulents grow naturally in shaded areas in their native environment rather then in direct sunlight.

This is why zebra succulents make excellent house plants as they can adapt to indoor conditions very easily.

In their optimal conditions zebra succulents grow in bright, indirect light which gives them a healthy, dark green color to their leaves.

However if your zebra succulent is placed in direct sunlight it can show signs of stress such as turning red and eventually white which is a sign the plant is trying to cope with too much sun.

Sometimes zebra succulents also turn yellow due to too much sun and dehydration.

To revive a sun damaged zebra plant, move it to an ideal bright space with indirect light.

Often the zebra plant can recover from excess sun if it is located in optimal conditions and the leaves can turn back to their characteristics dark green with white stripes.

If the tips of the leaves are turning brown and the leaves at the base of your zebra succulent feel dry and crispy then this is a sign of drought stress.

Zebra succulents are drought resistant plants and thrive in dry environments but can still suffer drought stress from under watering.

It is often said that ‘succulents do not need much water’ but this can be misinterpreted to mean that succulents such as the zebra plant should not be watered with a significant amount of water when, in reality zebra succulents require a generous soak, so that excess water trickles from the base of the pot.

However whilst zebra plants require a generous soak, they should only be watered when the soil has dried out completely to replicate the watering conditions in its natural habitat.

Watering too lightly, only moistens the top inch of the soil and the water does not infiltrate the soil properly to reach the roots where the moisture is required.

This causes the zebra plant to suffer drought stress with the leaf tips turning brown and the lower leaves to turn dry and die back.

Too much wind, or air currents from air conditioning, draughts, forced air or convention currents from sources of heat can all cause the soil and leaves of your zebra succulent to dry out quickly and turn the leaf tips brown with a dying appearance.

Watering the zebra succulent as often as required with a good soak and locating it in an area out of air currents ensures that it can revive from its drought stress and dying appearance.

With 2 or 3 watering cycles the zebra plant should show signs of recovery. Remove any dry, crispy leaves from the base of the plant if they pull of easily to improve the appearance of the plant.

(For all the best practices read my article how to grow and care for zebra succulents).