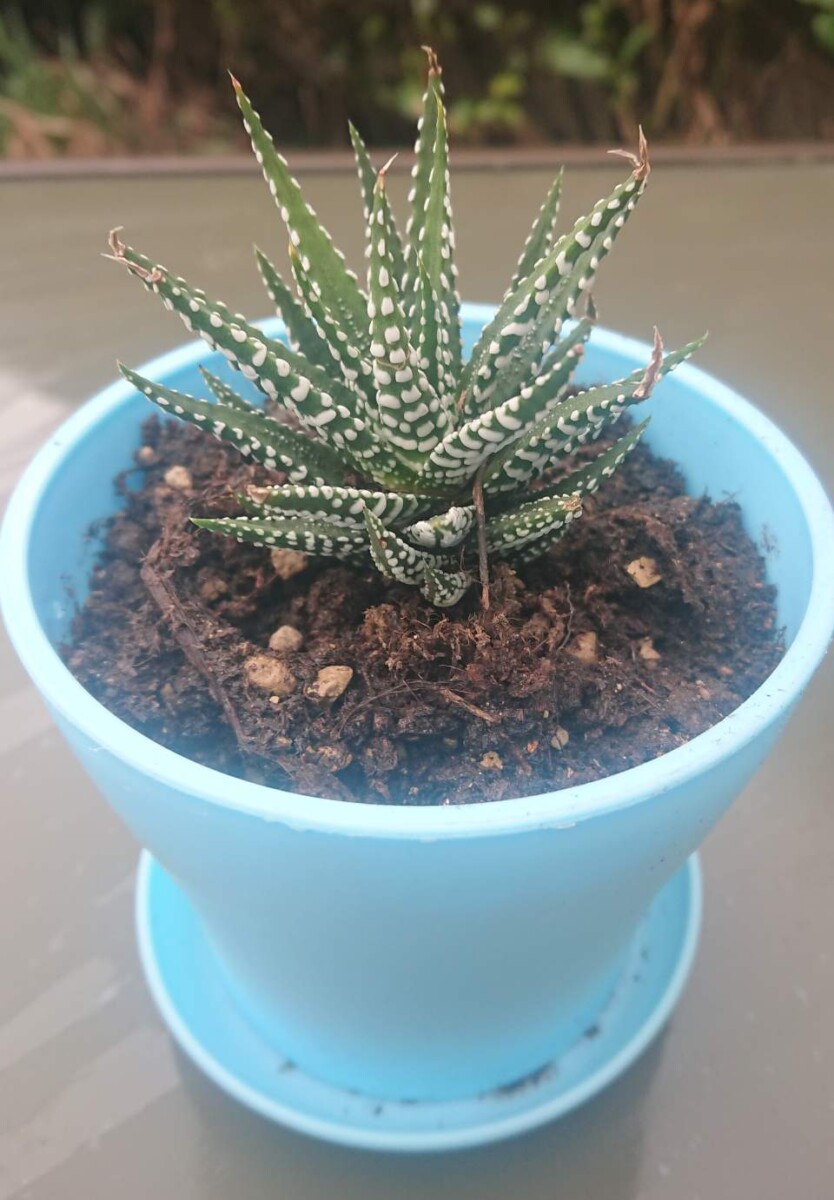 Water zebra succulents once every 2-3 weeks. Place in bright indirect sunlight in temperature between 55°F-80°F. Zebra succulents grow best indoors, in special succulent and cacti soil for the optimal drainage profile, in pots with drainage holes in the base.

Typically Zebra succulents reach a height and width of 6 inches (15cm) at maturity.

How Often to Water Zebra Succulents:

Zebra succulents are drought resistant plants that are native to Southern Africa in hot and dry conditions in gritty soils with infrequent rainfall.

Therefore to successfully care for zebra succulents replicate their watering cycle of their native environment by watering with a generous soak so that excess water trickles from the base of the pot and then allow the soil to dry out completely between bouts of watering.

How quickly your soil dries out determines how often you should water zebra succulents but typically in most homes watering once every 2 weeks meets the moisture requirements of the plant without causing root rot.

To establish the optimal watering frequency for zebra plants in your home water the plant with a good soak and monitor the soils moisture by feeling the soil at the bottom of the pot through the drainage hole in the base.

How Much to Water Zebra Succulents:

Always water with a generous soak, so that excess water trickles from the base of the pot.

This ensures that the water has infiltrated the soil so that the roots can uptake the moisture they require.

Symptoms of Over watering:

Zebra plants are adapted to living in dryer climates so they are more at risk from over watering then under watering.

The signs of stress of an over watered zebra succulent are leaves that turn brown or yellow with a soft, mushy texture to their leaves. The leaves can also droop downwards.

If this happens to you zebra succulent scale back the watering immediately and allow the soil to dry out. Consider replacing the soil if it retains moisture for long periods as this causes root rot.

(Read my article how to revive a dying zebra plant if your plant looks unhealthy).

The leaf tips can turn dry in response to under watering, especially low humidity or too much air flow from draughts, air conditions, forced air or any other air currents.

The lower leaves can turn brown and crispy when suffering severe drought stress from under watering. The thick plump leaves that store water tend to go thinner in drought.

If this happens to your zebra succulent, increase watering (as long as the soil dries out somewhat between bouts of watering), water with a generous soak and locate the plant in an area without significant air currents and it should revive after two or three cycles of watering.

(For all the best practices of watering read my article how to water a zebra succulent).

Zebra succulents grow in gritty well draining soils in their native South Africa and to grow zebra succulents successfully indoors it is important to emulate these soil conditions.

Ideally, plant your zebra succulent in specially formulated succulent and cacti soil with is prepared to mimic the soil characteristics of the plants native soil conditions with a large particle size and a well draining porous structure.

Normal potting soil tends to retain moisture for too long around the roots of your drought adapted zebra plant which can cause the same symptoms as over watering and promote the conditions for root rot.

In their native habitat zebra succulents tend to grow in shaded areas under the cover of rocks or other vegetation that can protect it from direct sun.

The sun in its native range of South Africa is very intense, so zebra succulents only grow where there is enough shade yet still bright light.

The zebra succulents preference for bright light make it a great adaptable house plant as long as it is not in direct light on a window sill, in which case it may turn red or white as a sign of stress.

In the optimal light conditions the zebra succulent has a deep green color with its distinctive white stripes.

Pots and Containers for Zebra Succulents

Plant zebra succulents in pots that are proportionate in size to the root ball.

If the pot or container is too large it can take too long to dry out and the zebra succulent is at more risk of developing root rot.

Ensure that the pot has a drainage hole in the base to allow excess water to escape so that the soil can dry out properly between bouts of watering.

Zebra succulents can grow in any type of material of pot but clay or terracotta pots are considered best as they are somewhat porous which allows the soil to dry more efficiently then plastic pots.

Zebra plants can tolerate being somewhat root bound but it is best practice to re-pot to the pot that is a size up to prevent roots blocking drainage holes and causing water to drain too slowly.

Re-potting is best done in the Spring but can be done successfully at any time of year.

Zebra succulents can enter a state of dormancy during Summer when the temperatures are high as a survival stargey to cope with hit, dyr and hostile conditions in thier native South Africa.

When temperatures exceed 80°F (27°C) in Summer for a consistent period then the zebra succulent slows down growth so it can conserves its resources, particularly water.

When the plant is in a state of dormancy it can be more susceptible to root rot as the plant has a lower demand for water.

So do not necessarily water your zebra succulent more frequently in Summer particualrly if the temperature is high.

As long as the soil dries out between watering and the zebra is planted in a pot that is proportional to its size then it should be okay and the plant can start actively growing again when the temperatures cool.

Zebra succulents grow at a faster rate (although the still grow slowly) during the Spring and Fall as there is a balance of bright light and cooler temperatures.

It is during the Spring and Fall that they are more likely to grow off sets which can be used for propagation.

A temperature range of between approximately 55°F-80°F (13°C-27°C) is best for growing zebra plants.

If the temperature exceeds this range then the plant turns dormant to retain moisture. If it is colder then the optimal range the plant can tolerate some cold occasionally but is likely to die back in frost.

Zebra succulents are slow growers even for succulents and eventually reach a compact size of 6 inches (15 cm) in height and width.

Zebra succulents grow faster in bright, indirect light rather then shade (avoid direct sunlight as this can burn the plant) so if you want to increase the rate of growth a grow light can be used for a few extra hours of light.

Zebra succulents are adapted to growing in gritty, sandy soils which tend to be low in nutrients, so they do not require as much fertilizer as other house plants.

However fertilizer can be used in the growing months, particularly in the Spring and Fall typically once per month for healthy growth.

I personally prefer to use a specialist succulents and cacti fertilizer (available from garden centers and Amazon) as it contains all the nutrients that zebra succulents require at the right concentrations to avoid problems with over feeding your succulents.

Avoid using fertilizer in the Winter or during high temperatures in Summer whilst the succulent is not growing as actively.