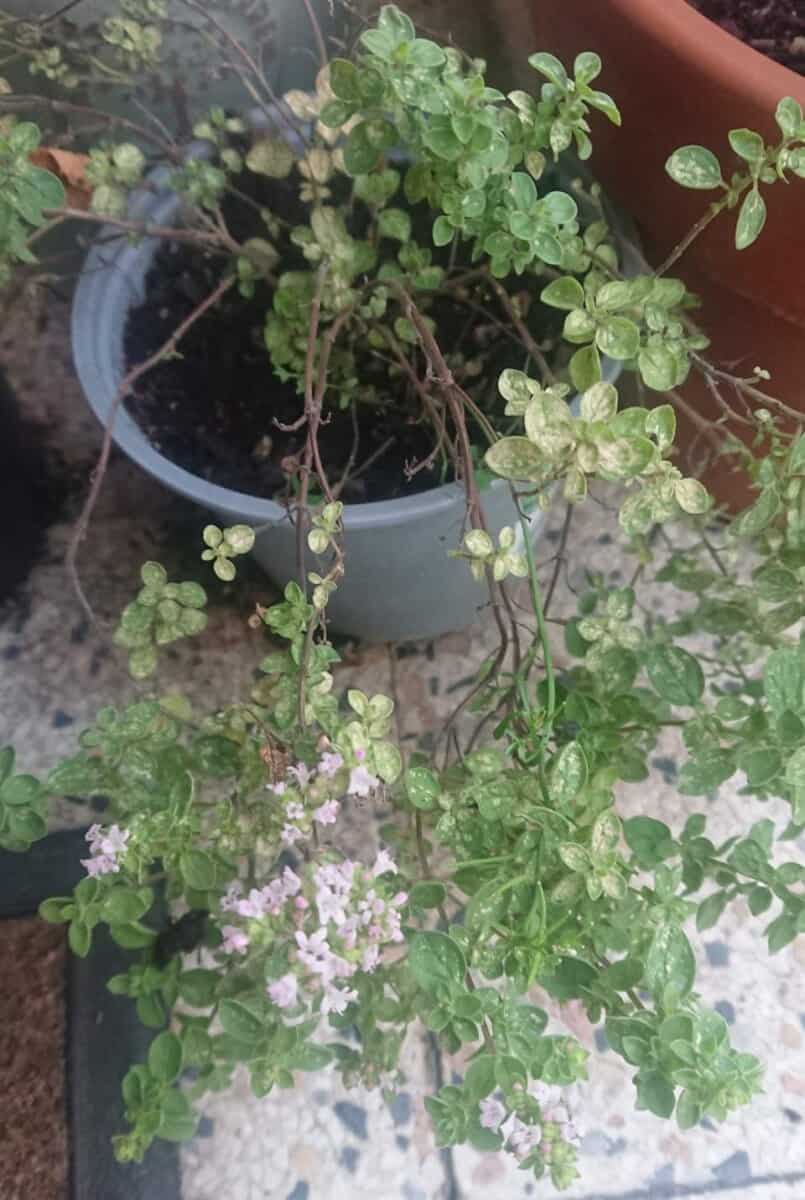 Oregano is a low maintenance Mediterranean herb that can live for around 10 years in the right conditions.

To grow oregano successfully it is important to replicate some of the growing conditions of the Mediterranean with full sun, well draining soil (amended with sand or grit) and allowing the soil to dry out between bouts of watering.

Oregano can also suffer if grown in the wrong type of pot or container and because of fertilizer high in nitrogen or because of a lack of sun.

Oregano is a native to the Mediterranean region of Europe where it grows in full sun, sandy soil with infrequent rainfall.

Oregano has specifically adapted to thrive in these arid conditions with dry soil and tends to suffer as a result of too much moisture.

Over watering, slow draining soils, high rainfall and high humidity can all cause the oregano to turn brown or black with a drooping or wilting appearance as damp conditions promote fungal diseases such as root rot.

There are several pathogens of fungal disease that can turn oregano leaves (and other Mediterranean plant) brown or black and they all thrive in damp soils which is the opposite of the oregano’s preferred soil conditions.

How to Revive Oregano Turning Brown or Black

When you have transplanted the oregano into new soil in a pot, refrain from watering for at least two weeks an shield the pot from excessive rainfall.

Pots and containers have favourable drainage conditions and its far easier to amend the soil to suit the oregano then when planting in garden soil.

By adding horticultural sand or grit you can help to replicate the sandy soil conditions of the Mediterranean where oregano thrives in its native environment.

The sand helps to improve the soil drainage so that the soil can dry out quickly between bouts of watering or high rainfall and therefore reduce the risk of root rot and fungal disease.

Always locate oregano in a sunny location as they naturally grow in open areas with full sun. Increased sunlight helps ensure the soil and any moisture around the foliage can dry out which helps to mitigate humid conditions.

Locate the potted oregano in an area with good airflow and allow for some distance between the pots so that there isn’t an overly humid micro climate.

If you follow these steps, the oregano should show signs of recovery in about 3 weeks, however severely affected oregano where all the leaves are discoloured can be difficult to save, in which case I recommend burning the plant or throwing it away so that the fungus disease does not spread to other herbs in your garden.

Oregano can turn yellow because of:

Oregano is a Mediterranean herb which grows well in medium nutrient soils with a high sand or gravel content.

If the soil is too rich in nutrients or because of fertilizer there can be too much nitrogen in the soil which causes yellow leaves, lots of foliage growth with weak drooping stems, a weaker aroma and a different culinary taste.

Oregano leaves can also turn yellow as a sign of stress due to over watering.

Potted and container oregano requires a good soak around once per week but the soil should have a chance to dry out between bouts of watering.

If the soil is consistently moist then this can cause fungal disease which can result in leaves turning yellow or even brown and black.

How to Revive Oregano with Yellow Leaves

The best way to revive oregano with yellow leaves is to replicate the soil conditions of the Mediterranean to which the oregano has adapted to growing.

To prevent fungal diseases associated with over watering and damp slow draining soil, it is important to add sand or grit to the potting mix or planting area when planting your oregano.

Sand and grit significantly improve the drainage of soil and help to emulate the natural conditions in which oregano grows and thrives.

In terms of yellow, drooping growth with a poor culinary taste, due to excess fertilizer, then it is good practice to cut back the growth to around 5 inches or so from the soil.

Oregano is resilient and can tolerate a good cut back more so then other Mediterranean plants such as lavender.

This stimulates new green growth from the oregano that should have a better flavour and aroma. Discard any yellow leaves as they have a poor flavour.

For a great visual guide to pruning oregano, watch this YouTube video:

It is possible that the oregano is suffering from a nutrient deficit due to a small pot or perhaps it has been in the same pot for many years and the roots have exhausted the available nutrients.

In which case you should re-pot the oregano in a larger pot with new compost.

The ideal pot for oregano should be at least 12 inches across so that it has the capacity for enough soil and therefore nutrients for the oregano to establish roots and thrive.

Ensure the pot has drainage holes in the base. The oregano could benefit from pruning to stimulate new green growth if it has been growing in a small pot. The leaves of oregano should show signs of recover over the next few weeks.

If your oregano is dying in a pot this is often because the pot is too small or there is not enough drainage holes in the base of the pot which prevents excess water from escaping and causes your oregano to die from root rot.

The ideal pot for growing oregano should be:

Oregano is native to the Mediterranean where the Winter temperatures are mild. Therefore a relatively large pot is necessary as larger pots have more capacity for soil which helps to insulate the roots of your oregano which are sensitive to cold temperatures.

Larger pots also provide more space for the roots to establish for a healthy plant.

As oregano is so sensitive to over watering it is essential that there is good drainage in the base of the pot. Avoid using tray or saucers underneath the pot as this can prevent water from draining and cause root rot.

To ensure good drainage you can place the pot on a stand or ‘feet’ to elevate the pot off the ground so that water does not collect underneath the drainage holes and cause root rot.

Replant your oregano in an appropriately sized pot with good drainage and in multi-purpose compost amended with sand to improve the drainage.

If the oregano is showing signs of root rot (brown or black leaves and dark brown, rotten roots) then snip off the infected parts of the plant back to healthy growth (follow the instructions about root rot written above).

If your oregano is not growing this is usually because of a lack of sun. Oregano are native to dry and sunny areas of the Mediterranean where they thrive in full sun.

If they are in partial shade or dappled light then the oregano does not have the energy and resources to grow properly and the aroma from the aroma of the leaves won’t be as strong or taste as flavourful.

The only way to remedy this is to transplant your oregano (or simply move the it if it is in a pot or container) to a sunnier location with at least 6 hours of sun.

Oregano benefit from an open and sunny location even during their Winter dormancy.

If your move the oregano to an area of full sun with good airflow and well draining soil (amended with sand or grit) then the oregano should start to recover and the aroma should be more pronounced.