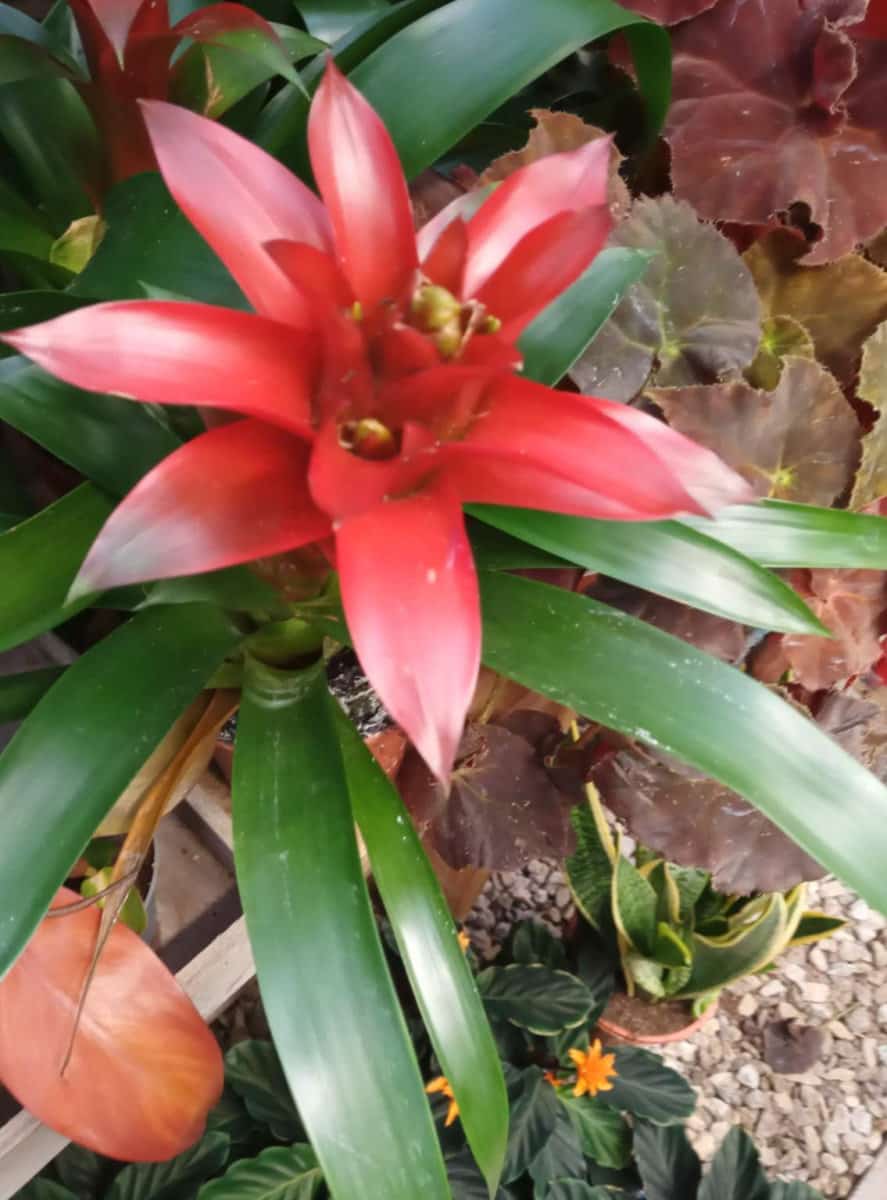 A dying bromeliad is usually because of low humidity, underwatering, temperatures lower then 50ºF or too much sun, all of which turns the leaves brown with a dying appearance. Usually the bromeliads flower turns brown and dies back after 6 months which also triggers the bromeliads leaves to turn brown and die back.

Bromeliads plants always turn brown and die after they have flowered which is part of their natural cycle.

Bromeliads are epiphytes which means they are specially adapted to growing on other trees. As a result they do not like their roots in normal potting soil which causes the roots to rot and the leaves to turn brown.

In their natural environment, bromeliads attain their moisture requirements for the humid tropical air which makes the leaves very susceptible to turning brown and dying indoors due to low humidity.

To revive a dying bromeliad (Bromeliaceae) it is important to recreate its preferred conditions of its native environment with bright indirect light, high humidity consistent watering and a temperature range of between 70ºF to 90ºF (21ºC to 32ºC) to during the day and 50ºF to 65ºF (10ºC to 18ºC) at night.

Keep reading for how to save your dying bromeliad…

Bromeliads can live a several years in the right conditions (different species have different life spans with 2-5 years being common) but the plant does die back after flowering (flowering can last up to 6 months).

Once the bromeliad has flowered, it has completed its life cycle and the flower and eventually the entire bromeliads turn brown and die back.

However the good news is that bromeliads often produce off setts or ‘pups’ throughout their life that emerge from the main base of the plant, which can be used to grow a new plant which should eventually mature and produce another flower.

Even after the bromeliad has flowered and the flower has started to turn brown die back, the bromeliad can produce more off setts to replace the main plant.

Because bromeliads produce off setts regularly, this means that you can have a continual supply of bromeliad plants for many years as each individual plant goes through its life cycle and die back.

How to Save your Bromeliad…

After the bromeliad’s flower turns brown and starts to die back, cut the browning flower back to the base with a sharp pair of pruners. Keep up the bromeliad in a warm, humid room with bright indirect light and keep the soil moist but not saturated.

This provides the right conditions for offsets to emerge and grow.

Wait until the off sett is around 1/3 of the size of the original mature bromeliad to ensure it is resilient enough to cope with stress before attempting to separate it and it repot it.

Repot the off set into a ideally a terracotta pot (as this is porous, which allows the soil to dry evenly) and I personally use an orchid potting mix to repot as most houseplant bromeliads are epiphytes like orchids which means they require potting mixes with the same characteristics, although specific bromeliad potting mixes can be bought online or in garden centers.

Here is a YouTube video which has a great visual explanation of how to separate bromeliad off setts from the mature plant:

(Read my article, how to revive dying air plants which are also a type of bromeliad).

The reason bromeliads turn brown is because of too much sun, low humidity, cold temperatures or overwatering. Most bromeliads are epiphytes that grow in well draining conditions. If the roots are in boggy soil from overwatering or poor drainage, they start to rot which causes the bromeliad’s leaves to turn brown with a dying appearance.

In their natural environment, bromeliads grow on tree branches or rocks and their roots are used for stability to anchor the plant in place.

The bromeliad prioritizes anchoring itself high up position off the forest floor, so it can be in bright light to promote growth and flowering.

The roots do not necessarily grow into soil, so the bromeliad attains all its moisture and nutrients from the surrounding humid air.

This means that the bromeliad’s roots are especially sensitive to root rot if they are in damp or compacted soil.

Bromeliads also do not tolerate any compacted soil and even normal potting soil as it retains moisture for too long and prevents their roots from respiring.

Under Watering Low Humidity and Too Much Sun (Brown Curling Leaves)

Most bromeliad houseplants also have leaves that are shaped to funnel water into a central ‘well or ‘tank’ (an adaptation to collect rainfall whilst the bromeliad off off the ground) and thus should be watered by topping up the well so that there is water at all times and regular misting rather then watering the soil.

If the well is dry the bromeliad leaves dry out, start curling, turn brown and die back.

If the room is too shaded then growth is usually poor whereas too much direct sunlight bleaches the leaves and can causes the tips or perhaps all of the leaf to turn brown and scorched or lose color and turn somewhat white.

Most bromeliad plants are also native to tropical areas and prefer a humidity of around 50 to 75%. if the humidity is too low, the bromeliad leaves turn brown, crispy and die back.

Bromeliads are also fairly unusual in that the require a 10ºF fluctuation in temperature from day to night in order to photosynthesize.

The optimal daytime temperature range between 70ºF to 90ºF (21ºC to 32º) and between of 50ºF to 65ºF (10ºC to 18ºC) during the night. Consider whether your bromeliad is too near any source of indoor heating as this can cause the opposite temperature cycle with higher temperatures at night which is contrary to the preferred conditions.

Any exposure to temperatures outside the preferred range can contribute to the bromeliad turning brown.

How to Revive a Bromeliad That is Turning Brown and Dying

The key to reviving bromeliad with brown leaves is to replicate the conditions of its native environment by increasing the humidity with regular misting, maintaining a temperature range of between 50ºF and 90ºF and planting the bromeliad in an aerated, porous potting medium.

Cut back leaves that have turned brown and crispy.

Once you have corrected the environmental condition that were causing your the bromeliad’s leaves to turn brown and created the optimal conditions, with high humidity, bright light and the preferred temperature range and the right potting medium, it is more likely the bromeliad should recover.

However if he bromeliad’s leaves have turned brown because of any issues pertaining to overwatering, damp or compacted soil are likely to cause root rot which is more difficult for the plant to recover from.

If the original mature plant dies back then bromeliads often grow off setts in abundance, which is are very easy to propagate to save the plant.