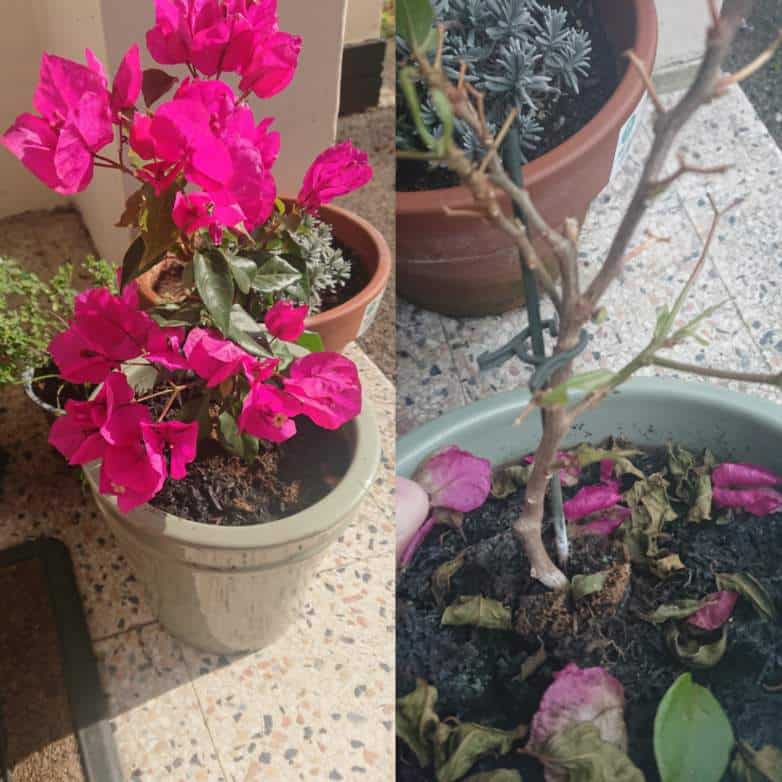 Bougainvilleas are evergreen in hot climates that have mild Winter but lose their leaves and flower in cooler climates and should be protected from freezing temperatures.

Bougainvilleas are native to warm climates such as Brazil and retain their leaves and display their flowers in Mediterranean climates, however they are deciduous in cooler climates. (Cold hardy in USDA zone 9)

This means that the temperature does not necessary have to drop below freezing for bougainvilleas to suddenly drop their leaves but it can be as a consequence of an unexpected cold snap that was in contrast to consistent warm or mild weather.

How to Save Bougainvillea Losing Leaves

If you are growing bougainvilleas outdoors in cold climates it is best practice to grow them in a pot or container so that you can bring the bougainvillea indoors as before the temperature goes below 5° C (41° F) as bougainvilleas are not cold hardy and often die back in a frost.

The shock of cold temperatures can cause leaf drop but this does not necessarily mean that your bougainvillea is dying, as long as it is protected from freezing temperatures with horticultural fleece or by being indoors.

If the leaf drop has correlated with cooler Winter temperatures then your bougainvillea can recover in the Spring when the temperatures warm up as long as you place the bougainvillea in a Sunny window and water it infrequently over Winter.

This is a photo of my Bougainvillea that has been brought indoors before the night temperatures were below freezing, it lost its leaves but new leaf growth emerges in the Spring.

By bringing the bougainvillea indoors for Winter it often suffers a degree of shock from being moved indoors from the cold outdoor temperatures to the comparatively warm indoor temperatures.

This can actually exacerbate the leaf drop but the bougainvillea cannot tolerate freezing temperatures and it the leaves begin to grow again in the early Spring.

Once the night temperatures are consistently above 5°C (41°F) then you can place your bougainvillea outdoors again in a sunny location.

It is best practice to place the bougainvillea outdoors for a few hours over the course of a week before leaving it outdoors so it has a chance to acclimate rather then just place it outdoors after a period of being indoors.

With patience new leaves on your bougainvilleas should emerge in the early Spring in response to warmer temperatures and more hours of light.

Bougainvilleas are native to hot and relatively dry areas of South America and thrive in any similar climates such as the Mediterranean or In California.

Bougainvillea has specifically adapted to environments with relatively low rainfall, therefore they are vulnerable to stress from too much moisture around the roots which can be caused by:

If the bougainvilleas roots are stay in damp soil for too long then the leaves often turn yellow and drop as a sign of stress.

If the bougainvillea is consistently over watered then this can cause fungal diseases such as root rot which often kills the water sensitive bougainvillea.

How to Save Bougainvillea with Leaf Drop Due to Over Watering

By creating dyer soil and watering conditions that replicate the bougainvilleas native environment, the soil has a chance to dry out somewhat between bouts of watering which prevents stress to the plant and reduces the risk of bougainvillea losing leaves.

Bougainvilleas leaves can regrow after a bout of over watering and the bougainvillea should also display more flowers in dyer soil.

If your bougainvillea is potted, always water generously but infrequently.

For example, it is most often best practice to water the pot with a soak once every two weeks in Summer rather then water lightly every few days.

This promotes proper root develop so that the roots can access the water and nutrients they require for a healthy plant.

(Read my article, how to water bougainvillea in pots).

Not Enough Sun Causes Bougainvillea to Lose its Leaves

Bougainvilleas are vines that require full sun for the best display of flowers and the healthiest most resilient plants.

If the bougainvillea is in too much shade then there is less energy to display flowers and the leaves can turn yellow and drop off as this is contrary to the conditions to which they have adapted in their native environment.

Whenever you see bougainvilleas with a spectacular display of flowers and lots of leaves they are located in areas with full sun, with warm temperatures as sunlight is directly correlated with flowers on display.

Therefore it is important for your bougainvillea to be located in the sunniest part of your garden to prevent it from losing its leaves so try to find a location with at least 6 hours of direct sun.

Bougainvilleas can recover once relocated to sunny area and you should start to see new growth over the next few weeks.

(Read my article, how to grow bougainvillea in pots).

If your bougainvillea is losing its leaves after you have bought it from the garden center or nursery or perhaps you have relocated when moving house then this is a sign of stress due to the contrast in conditions.

Bougainvilleas are sensitive to variations in sun exposure, temperature, airflow and watering frequency.

When you buy a bougainvillea from a store it is often cultivated in specific conditions of a greenhouse with controlled sun, watering, fertilizer and temperature, so when it is transferred to your garden the change of conditions can cause shock and the leaves (and flowers) to drop.

This is common and the bougainvillea can recover from losing its leaves if it is cared for properly as it requires:

By following the best care practices you can mitigate the risk of the bougainvillea losing its leaves.

It may take some time for your bougainvillea to acclimate to its new surroundings but it should begin to grow new leaves if it is happy in its surroundings.

I would not recommend giving your bougainvillea any fertilizer after it has dropped its leaves as the plant is in a state of stress and any additional fertilizer can potentially harm the plant.

You can apply a half strength regularly fertilizer in the Spring and Summer once per month once the leaves have started growing back.