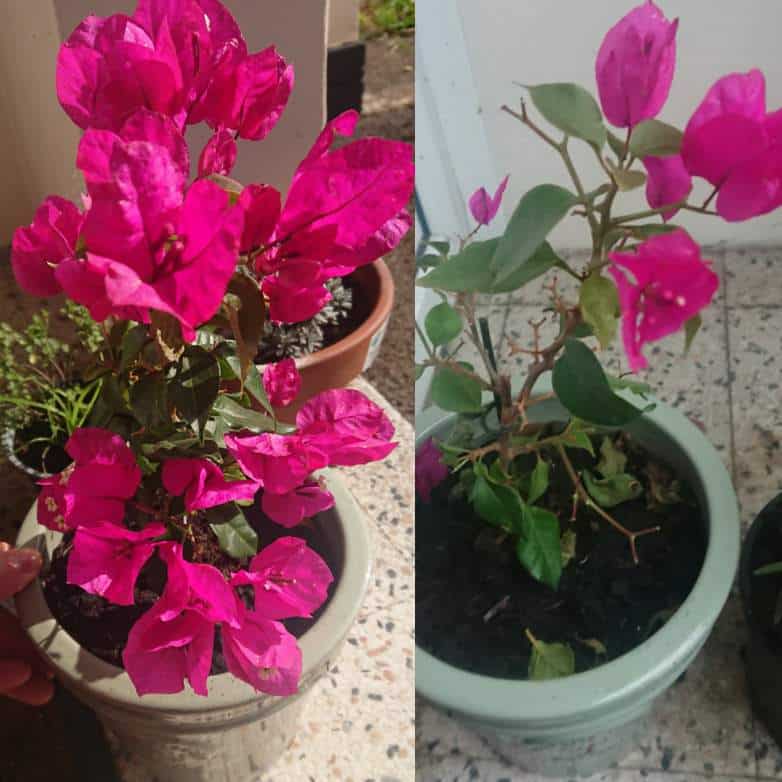 Bougainvillea can also drop their leaves after planting due to transplant shock or because they are not in full sun.

The most likely reason your bougainvillea is dying is because of over watering.

Bougainvilleas are drought resistant plants that are native to arid areas of South America and thrive in gardens that emulate their preferred dry conditions.

If a bougainvillea is over watered then it typically shows signs of stress such as leaf drop and a lack of flowers. Persistently over watering can even result in root rot which often is the cause of a dying bougainvillea.

It is common for gardeners to mistake leaf drop as a sign the bougainvillea requires more water which often compounds the problem.

If you are watering your bougainvillea more then once per week then you are almost certainly over watering.

Only water bougainvilleas when the soil has dried out somewhat since you last watered or after rainfall to ensure the soil does not remain damp as boggy soil is contrary to their preferred conditions.

Test the soil around the bougainvillea to a fingers depth to see if you can detect any moisture.

If the soil feels moist then skip watering for a few days until the soil feels more dry and then give the plant a generous soak (rather then a light watering) to encourage the roots to grow and establish in the soil which further increases its drought resistance and the hardiness of the plant.

‘Typically bougainvilleas tend to thrive when watered once every two weeks if there has been no significant rainfall and they are planted in optimal well draining soil.‘

This is particularly the case for bougainvilleas planted in pots as it provides the right balance of enough moisture for the plant to thrive and enough time for the soil to dry out so the roots do not succumb to water stress.

However I must re-emphasize is it is important to water according to climate. In areas of high rainfall, established bougainvilleas often do not require any additional water.

If your bougainvillea is dying or dropping its leaves then scale back the watering to once every two weeks and only water if it has not rained significantly.

The bougainvillea should show signs of recovery (if the temperature is warm and it in full sun) if it is just suffering from water stress over the next few weeks.

This is dependant on whether the bougainvillea is planted in well draining soil or in a pot with drainage holes in the base.

However if the bougainvillea has been in saturated soil for too long it may have root rot and the plant could die.

Bougainvilleas prefer the soil to be light with a porous structure to allow excess water to drain away from the roots (to prevent root rot).

Ideally a bougainvillea should be planted in soil with organic matter (compost and leaf mould) mixed in with some inorganic material (horticultural sand or grit) to increase the drainage and aeration of the soil, so the the structure allows the soil to be somewhat dry between bouts of watering, replicating preferred soil conditions in its native environment.

Bougainvilleas do not grow well when planted in slow draining soil such as heavy clay or naturally boggy areas which can cause water to pool around the roots and cause water stress.

The signs of a bougainvillea suffering because of slow draining soils are the same as an over watering with leaf drop being the first indicator despite warm or mild temperatures (leaves can also drop due to cold).

How to solve it:

There are some best practices to be aware of before transplanting bougainvillea so I recommend watching this helpful YouTube video first:

Bougainvilleas actually tolerate their roots being pot bound and it is even correlated with more flowering (roots stress can encourage flowering) however a larger pot or container has the capacity for more soil which helps to insulate the cold sensitive roots in cooler climates so a relatively large pot or container is often a better choice.

In climates with higher levels of rainfall the more sand or grit I would add to the potting mix to ensure the roots can dry more efficiently to prevent root rot.

If the bougainvillea is to large to move the I would recommend creating channels in the soil around the plant with a fork and adding sand to the channels (ideally with a funnel) to change the soil profile, improve the soil structure and increase drainage.

This tactic can be surprisingly effective way to improve the drainage and prevent your bougainvillea from dying.

In cooler and higher rainfall climates more sand, grit or perlite in the soil helps to increase drainage to counteract the water in order to prevent root rot or water stress.

(Read my article, how to water bougainvillea in pots).

Bougainvillea Leaf and Flower Drop due to Cold Temperatures

Bougainvillea is native to hot, sunny and dry areas of South America. therefore it is relatively cold sensitive (hardy in USDA zones 9).

If you live in a cooler climate or have a unseasonable cold snap (with a drastic fluctuation in temperature) then bougainvillea may drop its leaves as a sign of stress.

The colourful bracts (which are actually specialised leaves) that surround the flowers may also wilt or drop off as a reaction to the cold.

However some varties do tolerate cold better then other with some even tolerating a light frost and coming back strong when the weather warms up again.

Also bear in mind that bougainvillea can actually be deciduous in cooler climates (and evergreen in warmer areas that are similar to their native climate) so leaf drop is not necessarily a serious concern or a sign that the plant is dying.

If bougainvillea experience a light frost then its likely that some of the leaves, flowers can drop and possibly the branches can die.

However the hardier older wood and the roots (which are the most cold sensitive part of the plant) often survives as the roots are insulated by the soil.

If there is a particularly hard frost or cold temperatures for a long time then it is likely that the bougainvillea does not revive.

The best practice for growing bougainvilleas in cold climates is to plant them in pots and bring them indoors as soon as the temperature at night is below 40°F (5°C) (and place the pot in a sunny window) to prevent the bougainvillea from suffering in the cold or dying.

If you bring your bougainvillea pot indoors for Winter then water about once every 4-6 weeks.

Place the bougainvillea in a room that ideally has a fairly consistent temperature such as a garage, heated greenhouse or perhaps the kitchen rather then the by a source of heat or in the path of any air currents as the fluctuation in temperature can cause the plant stress.

Place the bougainvillea outdoors in full sun when the temperature at night is reliably more then 40°F (5°C) the following Spring.

The amount of sunlight is the one most important factor for the health and life span of bougainvillea and it is directly correlated with the number of flowers it can display.

Bougainvilleas require at least 6 hours of direct sun per day during Spring and Summer to grow successfully and display flowers. If they are in too much shade then bougainvilleas tend to have less impressive growth with less flowers and they are not likely to live very long.

Direct sun also helps to increase evaporation for the surrounding soil which helps to create the dryer conditions that bougainvillea are naturally accustomed.

If your bougainvillea is not in full sun then you can either create more light by thinning out any overhanging trees which may be casting shade or trim back any surrounding vegetation.

The other option is to transplant the bougainvillea, if possible to a sunnier location.

Ideally you have a potted or container bougainvillea which can be easily moved to full sun.

If you move the bougainvillea to a sunnier area of your garden, it should show signs of recovery in a few weeks but if it is left in the shade for too long it can be difficult to revive.

(Read my article, how to grow bougainvillea in pots).

If your bougainvillea is dropping leaves and flowers after planting then this is often because the plant is in shock due to a drastic change in growing conditions.

When bougainvilleas are grown commercially for sale in garden centers they can be grown in very controlled greenhouse conditions with consistent temperatures, optimal sunlight and watering and the roots can be accustomed to the soil conditions.

With such consistent conditions the bougainvillea can become less hardy and more sensitive to variability in conditions.

So when they are transported to a garden center and then to your home they are often planted in contrasting conditions from which they are accustomed which can cause transplant shock.

Transplant shock can cause leaf and flower drop of your bougainvillea and it may seem like the plant is dying.

However some degree of shock is not usual and the plant can recover as long and as they are cared for properly the plant can adjust to your garden.

With all the right growing requirements, the bougainvillea has all the resources it needs to recover from transplant shock.

It may take some time for the plant to adjust to its new conditions and bear in mind just because the leaves are dropping it does not necessarily mean the plant is dying but just stressed until it adjusts to its new surroundings.