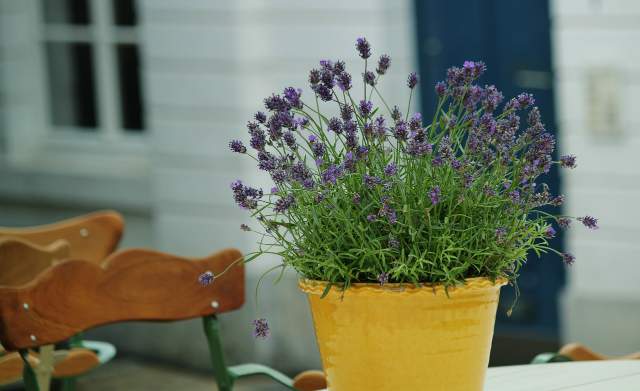 The best lavender for growing indoors is French lavender. French lavenders can tolerate fluctuating temperatures of houses better then other species of lavender and flower for longer. Choose a smaller variety such as Lavandula stoechas ‘Anouk’ as this will comfortably fit indoors on a window sill.

French lavenders can flower for several months indoors whereas English lavenders often will not flower to their full potential when growing indoors.

Why French lavenders are best for growing indoors

French lavenders are particularly well suited for growing indoors and can adapt to the fluctuating temperatures of houses from heaters and air conditioning more readily then other lavender species.

There are also the most heat and drought resistant of all the lavenders which is important as the soil for lavenders in pots or containers that are indoors will typically dry out quite quickly. (Although all lavenders do thrive in dry soil and only need watering once every 2 weeks during the growing season). Read my guide to watering lavenders to learn more best practices.

Whilst other lavender species will grow indoors, French lavenders will typically produce more flowers then English or Hybrid lavenders when grown indoors.

When English lavenders do not experience a sequential change in temperature through the seasons then they do not flower to their full potential, as the plant relies more on the temperature contrast to stimulate flowering in the Spring and Summer months.

Therefore the relatively constant temperature of a house, which can even be warmer in winter because of heating may reduce the number of flowers and the length of the flowering season for English lavenders.

French lavenders on the other hand are quite comfortable indoors and will flower well indoors as well as outdoors.

French lavender will flower in Spring as early as May and can flower for months well into Fall if the conditions are optimal. This is substantially more then most other cultivated lavenders and its a real joy to see the lavender in bloom with its characterful crown of petals for such a long time.

It should be noted that whilst French lavender does flower for longer, the smell is more subtle then English lavenders, however the foliage does exude a lovely fragrance all year round.

Read my article for the full guide and best practices of growing French lavender.

Which variety of lavender is best for indoors?

It is important to choose the right variety of French lavender for growing indoors because of the size of the plant at maturity.

Most French lavenders are fairly large once full size, with varieties such as Lavandula stoechas ‘Regal Splendour’ 30 inches (76 cm) tall and 24 (60 cm) inches wide, which is far too large to have in your house on a window sill.

It is important that lavender receives as much light as possible to so you will need to place it in a sunny window.

A miniature French lavender such as Lavandula stoechas ‘Anouk’ is far more modestly sized and therefore is far more practical for growing indoors as it won’t occupy too much space.

This is a charming french lavender that is well suited to pots and containers and is small enough to be placed on a sunny window sill and displays many flowers and exudes sweet aromas.

Whilst French lavenders adapt to life indoors better then other lavender species, they will only live 4 or 5 years even with good care. English lavender varieties such as ‘Hidcote‘ and ‘Munstead‘ will live for much longer but will not flower as well or for as long as French lavenders when indoors.

Read my article to learn the all the best practices of caring for lavender indoors.