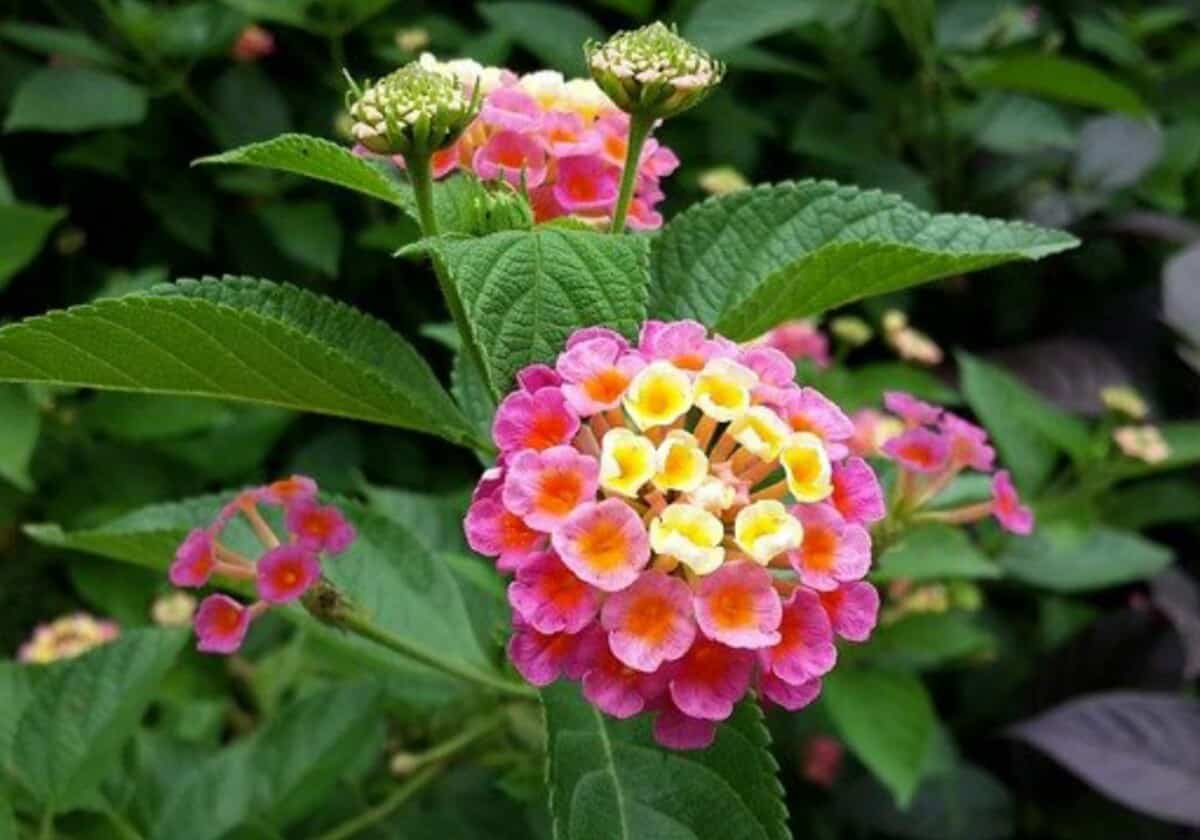 The reason for lantana not blooming is usually because of it is planted in too much shade, there is too much moisture around the roots or because of too much fertilizer that promotes foliage growth at the expense of the lantana’s flowers.

To ensure lantana displays flowers it is important to replicate some of the conditions of the lantana’s native environment.

Lantana Requires Some Stress to Flower

Lantana is a rugged flowering plant that is native to dry tropical regions in Africa and the Americas where it thrives in scrubby environments with full sun, infrequent rainfall and well draining soil with relatively low fertility.

Lantana is specifically adapted to growing and flowering in these harsh conditions and thrive on neglect.

Therefore to incentivize lantana to flower you should recreate these conditions as much as possible in your garden rather then give them too much care and attention.

Lantana actually require some stress to flower so if they are over watered, in consistently moist soil and have regular applications of fertilizer then this tends to result in a lantana with foliage but without flowers.

The only occasions lantana should be watered are in times of extended drought, when planted in pots or whilst they are establishing after planting.

Only water pots around once per week at most as pots can dry out if they are in full sun due to the limited capacity for soil to hold moisture.

Water early in the morning to avoid damp soil overnight and always water at the base of the plant and not overhead to prevent leaf fungus.

With less frequent watering and scaling back fertilizer you can emulate the conditions which stimulate lantana to flower in their native habitat in your garden.

Not Enough Sunlight to Flower

Lantana flower to their full potential when in the most amount of sun possible with more abundant flowers and more pronounced fragrance.

Lantana are native to the sunny conditions of Africa and the Americas in ‘Mediterranean’ climates where they are at the healthiest and flower the most in full sun.

The less sunshine there is the less energy the lantana has to produce flowers. Lantana requires 6 or more hours of sun to flower during the Spring and Summer months but more sun is even better.

If lantana has significantly less then 6 hours of sun per day the the plant is under stress and won’t flower and also be more vulnerable to pests and diseases.

Cut back any vegetation that may be casting shade on your lantana and depriving it of light or plant lantana on a pot so that you can move it to a sunny area such as a patio to promote flowering.

The success of your lantana displaying the most flowers possible is dependent on the weather and can fluctuate significantly from year to year due to its sensitivity to certain conditions such as excess moisture, soil fertility, and hours of sunshine.

Therefore expect some naturally variability in the amount your lantana flowers from year to year.

If your lantana has not flower well this year then this may be a reaction to:

Lantana in Pots Not Blooming

There are several reasons why a lantana may not be flowering (sunlight, over watering etc.) but there are some factors that pertain specifically to growing lantana in pots and containers that may prevent flowering.

If your potted lantana is not flowering then this usually because:

Lantanas do grow well in pots because of the favorable drainage conditions, however, small pots have less soil and dry out quickly as lantana require full sun and warm temperatures to flower.

Excessive drought stress from being in a small pot can potentially prevent flowering.

The solution is to transplant your lantana to water your lantana more frequently to account for the increased evaporation or, if there are any visible signs of the roots becoming pot bound you should transfer it to a larger pot.

Lanatans are not heavy feeders and prefer to lower fertility to stimulate flowering but they can exhaust the nutrients in the soil if they are kept in the same pot for many years.

A larger pot with new compost and perhaps some horticultural grit if you live in a humid or rainy climates should provide a good balance of nutrients whilst also retaining the well draining soil characteristics that lantana require to flower.

Watering lantana in pots with a generous soak once per week is enough to prevent any drought stress even in hot weather to ensure a good display of flowers.

Do not water if there has been significant rainfall in the week as damp soil is more likely to harm flowering then drought.

Always plant lantana in pots with drainage holes in the base to allow excess water to escape.

Some decorative pots do not have drainage holes in the base which causes water to pool around the roots and increases the risk of root rot which prevents flowering and can cause the plant to die back.

Lantana plants sometimes do not flower after planting because:

As long as you try to mimic the conditions of the lantanas native environment with full sun, well draining soil, infrequent watering and avoid applying fertilizer then the lantana should adjust to its new conditions and start flowering in the Summer.

Lantanas are native to scrubby areas of Africa and the Americas where they grow in relatively low fertility and sometimes quite sandy soil that drains quickly.

If lantanas are grown in boggy soils or heavy clay then this recreates the same affects as over watering with too much water around the roots of your lantana causing stress which prevents flowering and even promotes fungal disease such as root rot.

If your garden has slow draining soil then it is better to grow lantana in pots, containers or raised beds for their favorable drainage characteristics.

It is also far easier to customize the soil profile to suit lantana rather then try to amend your slow draining garden soil.

When planting lantana in pots or garden boarders, amended the soil with lots of compost as this holds some moisture but has a well draining structure that allows excess water to drain away.

Add some horticultural grit, sand or perlite to further improve drainage and to replicate the soil conditions of the lantanas native range, aiming for around 2 parts compost and 1 part grit.

Well draining soil that is similar to the soil in which they grow naturally and gives lantana the best prospect of flowering in the Summer.

Lantanas not Flowering when the Berries are Set

So if you are looking to buy a lantana for a nursery or garden center avoid any plants that already have berries as these are less likely to display flowers.

Regularly deadheading a lantana is key to increasing the longevity of the flowering period so as soon as the flowers are looking past their best snip them off to stimulate more flowering.

Deadheading redirects the energy of the plant to producing more flowers rather then seeds.

The lantana lace bug is a pest that feeds on the sap of leaves and flower buds and causes white marks on the leaves which can then fall off. This affects the plants ability to display flowers and is detrimental to the plants overall health.

If you notice white marks on your leaves and evidence of insects then the best course of action is to spray the leaves with an insecticidal soap that is often derived from neem oil.

This soap is then sprayed onto the leaves and kills the lace bugs but is non toxic and should not harm other wildlife other then pests.

Insecticidal soap is available at garden centers and on Amazon for a reasonable price.

Once your lantana has been treated it has more chance of flowering, However an infestation can really impact flowering for the Summer.