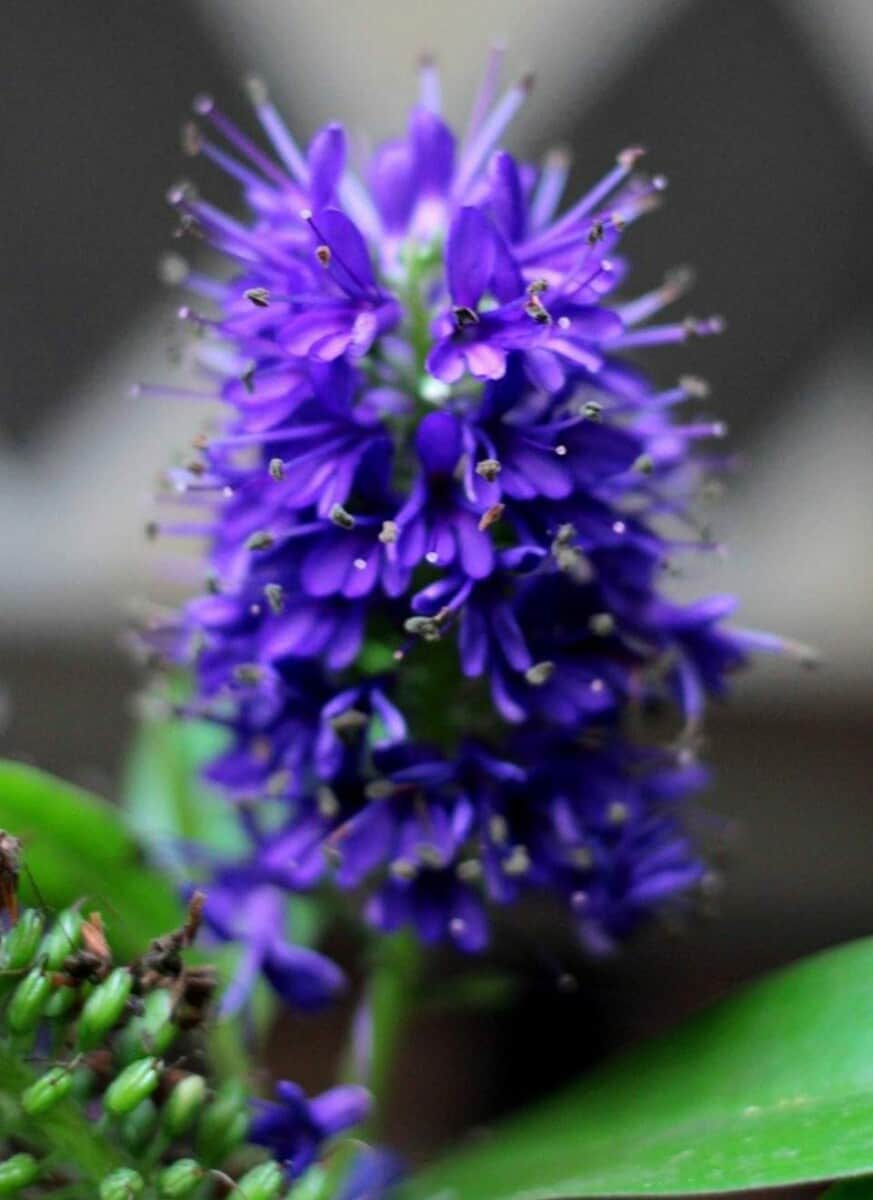 The most common cause for a non flowering hebe is because of pruning incorrectly. If hebes are pruned back too hard or at the wrong time of year then you can cut away the growth from which hebe produces flowers and the hebe may not flower until the following year.

To encourage your hebe to display flowers plant it in full sun in well draining soil, amended with a large amount of compost and prune only lightly straight after flowering (note that annual pruning is not always necessary).

Too much nitrogen can also prevent hebes from flowering from fertilizer or the use of manure when amending soil.

The most common reasons for hebes not flowering is because of:

Hebes are adaptable, low maintenance plants that generally thrive on neglect rather then too much attention.

However they do require special care when it comes to pruning.

Pruning back too hard into the old woody growth is likely to prevent the hebe from flowering the following year.

With a hard prune the hebe typically either tends to die off or it can stimulate new leafy growth in the summer with no flowers, depending how severely it has been pruned.

Hebes also should be pruned back immediately after flowering. If your prune too late in the fall or in the early spring you are likely to remove the growth on which the hebe should display its flowers.

It is not strictly necessary to prune hebes every year in the same way as roses for example, but if you leave hebes to grow for years without pruning they tend to grow leggy, unproductive in terms of both foliage and displaying flowers.

Pruning Hebes for Flowers: The best way to prune your hebe so that it retains a good shape and flowers in the late Summer or Fall is to lightly prune it back straight after flowering.

Prune back the green pliable, more flexible growth and avoid pruning the wood.

This gives the hebe time to recover from pruning before Winter and allows the plant to put on new growth in the Spring undisturbed so it is ready to display its flowers in the Summer.

If you have missed the optimal window for pruning hebes (straight after flowering) then I would recommend to not prune your hebe to ensure that it can flower the following Summer.

Whilst annual pruning of hebes is not always required, it is also not a good idea to neglect them completely for too long as they can turn woody and unproductive which results in fewer flowers.

Once they have turned woody and over grown it is difficult to revive the hebe.

However some hebes can tolerate a hard prune back to the wood to form a better shape, and produce new growth and eventually flower once it has recovered but this can be a risk as hebes much prefer a little and often approach to pruning.

Not Enough Light for Flowering (6+ hours of sun is Optimal)

Hebe is a hardy and adaptable flowering perennial that has similar requirements as Mediterranean plants and prefers open areas with full sun with at least 6 hours of sun in Summer being optimal for a good display of flowers.

However they can still survive and flower with fewer hours of sunlight but the less hours of sun there is, the less energy the plant has to display flowers in the Summer.

If the hebe is in too much shade then there is likely to be less growth of stems foliage and flowers.

To provide your hebe with more light and increase the number of flowers, try to cut back any over hanging tree limbs that may be casting shade or perhaps cut back foliage from near by plants that may crowding the hebe.

If the hebe is in full shade then it is advisable to transplant the Hebe to a sunnier location otherwise the plant is not likely to flower to it potential.

Transplant hebes in the Spring or Fall to allow the plants roots to establish in the soil without having to contend with full sun and the heat of Summer.

Ensure that the garden soil is well draining and amend the soil with compost before planting to ensure the plant has plenty of nutrients and to help retain moisture as the plant can be more vulnerable to drought straight after planting.

The hebe may not flower its best the following year as it can take time for it to adjust to a new location but as it should flower very well the year after once it has adjusted to its new location.

Hebe Not Flowering After Planting

Hebes do not necessarily flower to the full potential in the Summer after planting.

Non flowering hebes after planting can be because of:

There is not much you can do to promote flowers to other then wait for year whilst the hebe adapts to its new surroundings, however following the best practices of care, should help to minimize any transplant shock:

With the right care practices and some patience the hebe should flower well a year after planting when it is more established.

Hebes can struggle to flower if they are planted in clay soil because:

If the hebe has to contend with heavy compacted clay soil or boggy conditions it is likely to be too stressed to display flowers.

Try to avoid planting hebe in heavy clay by planting in pots, containers or raised beds rather then garden boarders.

However it is possible for the hebe to grow in clay soil if you dig out a large hole for planting and add plenty of compost to improve the drainage and soil structure so conditions are more favourable for the hebe.

The larger the area that you amend with compost the better the hebe should grow and flower, as long as the soil is evenly moist and not boggy.

Too Much Fertilizer for Flowering

If you add fertilizer too frequently or in too high concentration to hebes they tend to grow lots of lush foliage and new stems (that can go droopy) but with fewer flowers.

Hebes are not particularly heavy feeders and do not require frequent fertilizer to flower at their best. An excess of nutrients (Nitrogen in particular) can prevent your hebe from flowering.

Hebes that are planted in well prepared soil with plenty of organic matter and receive the occasional mulch in the Spring, do not require additional fertilizer to flower.

In fact they often flower better in soil that is well draining and not too rich in nutrients.

If you have added fertilizer of organic material that is high in nitrogen (poultry manure) then scale back any use of fertilizer and wait till next year for the nitrogen concentration to decrease for your hebe to flower properly, but in the meantime enjoy the green foliage!

Applying a tomato feed to the soil around your hebe (which contains potash which to helps promote flowers) in the Spring can re-balance the nutrient profile in the soil for flowering.