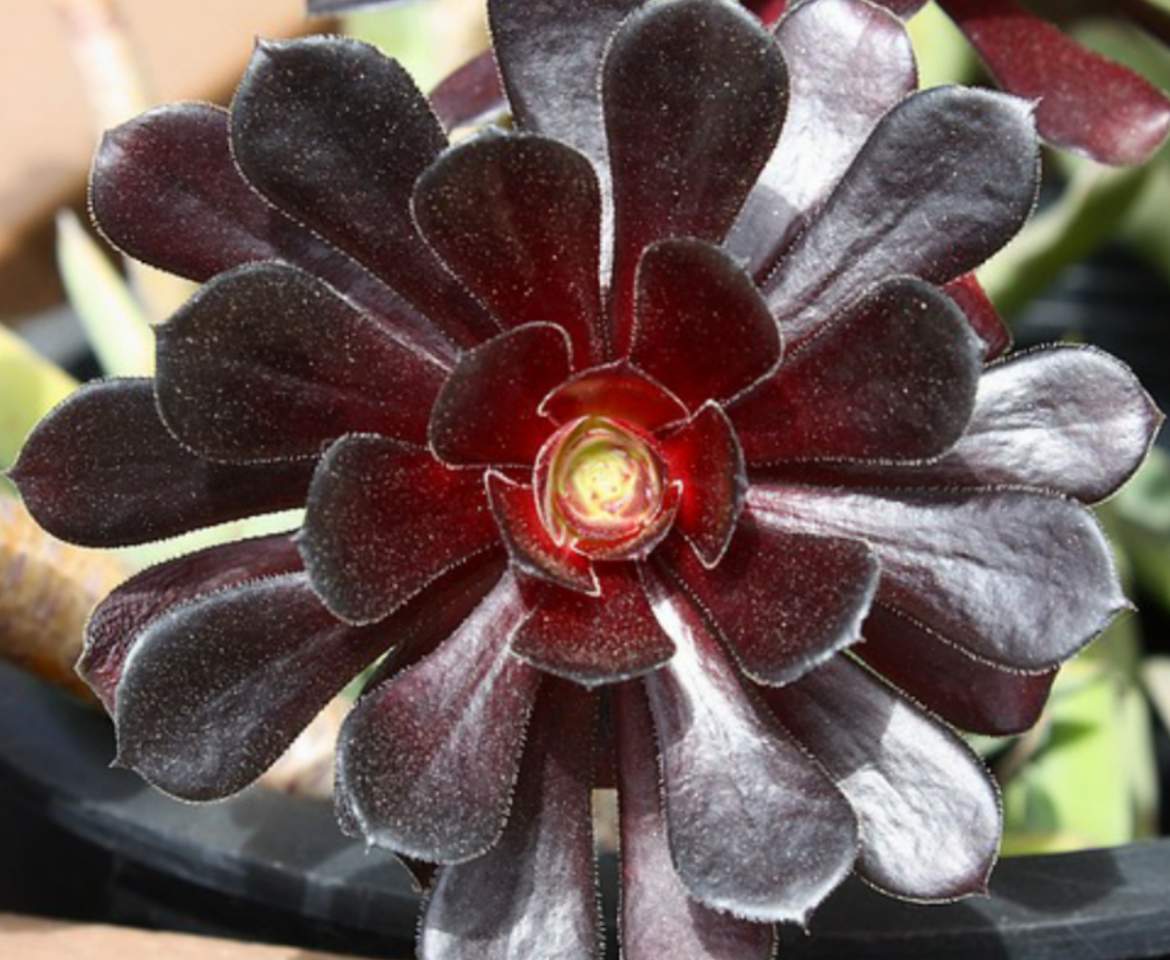 The reason for a dying black prince succulent is often because of over watering and damp soils which turns the leaves soft and droopy with a dying appearance. Not enough sun causes the black prince plant stem to turn leggy, with the leaves to turn green and the lower leaves to die back.

Over Watering (Leaves Turning Brown or Yellow and Mushy)

The most common reason for a black prince echeveria dying is due to over watering.

Black prince succulents are native to Mexico where they grow in a hot, dry desert like climate with gritty, well draining soil and infrequent rainfall.

If the black prince succulent is watered too often then it can show the symptoms of:

If the black prince succulent has been over watered for some time then it develops root rot which is very difficult for the plant to recover from.

However if you notice the symptoms of over watering and then scale back the watering before root rot develops then the plant can often recover.

As black prince succulents are adapted to drought conditions, over watering is more often the problem rather then under watering when they are cultivated.

If you are watering black prince succulents more then once per week then over watering is probably the cause of it dying back.

The most important step is to scale back the watering and let the soil dry out when you see the symptoms of over watering.

To establish how often you should water black prince succulents in your home give the soil a really generous soak and then check to see how long it takes for the soil to dry out at the base of the pot.

The best way to do this is to feel the soil at the bottom of the pot through the drainage hole in the base.

If the soil still feels moist or damp, then delay watering for a few day, if the soil feels dry then this is the perfect time for watering.

Typically watering once every 2 to 3 weeks is a good watering schedule for black prince succulents but it is important to establish the optimal watering frequency for your conditions in your home by monitoring the soils moisture.

Often scaling back the watering and letting the soil dry out completely can revive your black prince succulent by if you notice the mushy texture to the leaves spreading then remove these individual leaves from your plant to prevent rot from spreading.

If the plant gets progressively worse despite letting the soil dry out properly then this is often due to the soil retaining too much moisture for too long around the roots or an indicate of root rot.

The only reliable way to save a succulent with root rot is to take cutting of leaves fro propagation as the various fungal pathogens that cause root rot are difficult to treat.

Watch this helpful YouTube video for how easy it is to propagate succulents from leaves:

Soil Retains Too Much Moisture Around the Roots

Conventional potting soil generally retains too much moisture around the roots of your black prince succulent to tolerate and the plant develops the same symptoms of over watering with dying mushy leaves.

Soil that retains too much moisture or drains slowly is also likely to cause root rot.

A black prince succulent should be planted in specific succulent and cacti soil (available from garden centers and Amazon) as this replicates the well draining, soil characteristics of its native environment.

If your black prince succulent is in ordinary potting soil that does not drain well and dry out quickly after watering then replace the soil to prevent the succulent from dying.

Take the black prince plant out the pot and gently remove the potting soil, whilst avoiding any root damage.

Wash the pot it was planted in with disinfectant to kill any fugal disease pathogens that can thrive in damp soil.

Replant the black prince echeveria in the new succulent soil which mimics the soil profile of the succulents native environment.

Remove any significantly mushy soft leaves to prevent rot from spreading and implement the optimal watering practices, allowing the soil to dry out between bouts of watering.

The black prince succulent can recover if you replant it in well draining succulent soil so that the roots can dry out properly and stay healthy.

If the black prince succulent is in too much shade then they can lose their black color turning green and the stems can grow leggy as they search for more light.

A black prince that is in too much shade can redirect its energy to growing the younger leaves in the middle of the rosette causing the older, lower leaves to turn brown, dry and crispy, often falling off the plant.

Black prince succulents should be planted (or their pot located) in at least 4 hours of sun to help retain more compacted stems and the darker colors of the leaves.

How easy it is to save your black prince succulent depends on how long it has been in the shade.

If you move the black prince succulent from an area of shade to full sun, do so by gradually exposing it to more light day by day.

If the succulent goes from an area of shade to intense full sun the leaves can turn and turn brown from which they often do not recover.

Moving the plant for a bit longer each day allows the leaves to acclimatize to the new levels of light and avoid sunburn.

If the stems have grown very leggy and the rosettes are drooping then they sometimes do not return back to normal if the stem has been weakened.

In which case you can cut off the rosette and plant it in another pot and it should root quickly and form a plant.

Watch the helpful YouTube video for more on leggy succulents and how to revive them:

Black prince succulents are not cold hardy and die if they are exposed to freezing temperatures.

In most cases the new tender leaves tend to go soft and mushy first although extreme cold causes the plant to die back.

Move the black prince plant to a location between 55°F-80°F (13°C-27°C) consistently and ensure that none of the leaves are in contact with a cold window or in a cold air current.

If the leaves feel soft then wait for several days if not weeks for the mushy, cold damaged part of the plant to dry out somewhat and it should form a callus.

Once the soft part of the leaf has dried up cut the leaf back to below the damaged part as most often the specific cold damaged areas do not recover.

Only resume watering the succulent when the callus of the leaf cut has healed over to prevent other potential problems.

It requires some delayed gratification but the black prince succulent can eventually grow new leaves and start to recover a normal appearance after cold damage.